2020 2월21일 Dr Michael Dent
Memphis Meats, a leading start-up in the race to develop cultured meat products, recently announced that it had closed a $161 million funding round. This is more money than the entire cultured meat industry had previously raised in its seven-year lifetime and makes Memphis Meats by far the most well-funded company in the industry, with over $180 million in total funding. But what does this mean for the cell-based meat industry?
Cultured meat follows the idea that realistic meat products can be produced from cultured animal cells without requiring the slaughter of any animals, avoiding the ethical and environmental issues associated with the global meat industry. Cultured meat has generated much excitement in recent years, with the recent IDTechEx report, "Plant-based and cultured meat 2020-2030", forecasting the industry to reach over $500 million in sales by 2030. However, as of yet, no cultured meat company has released a commercial product. Memphis Meats' latest funding round could be a big step in changing this, with the company expecting to use the funding to build a pilot production facility, a major milestone in the path to releasing commercial products. 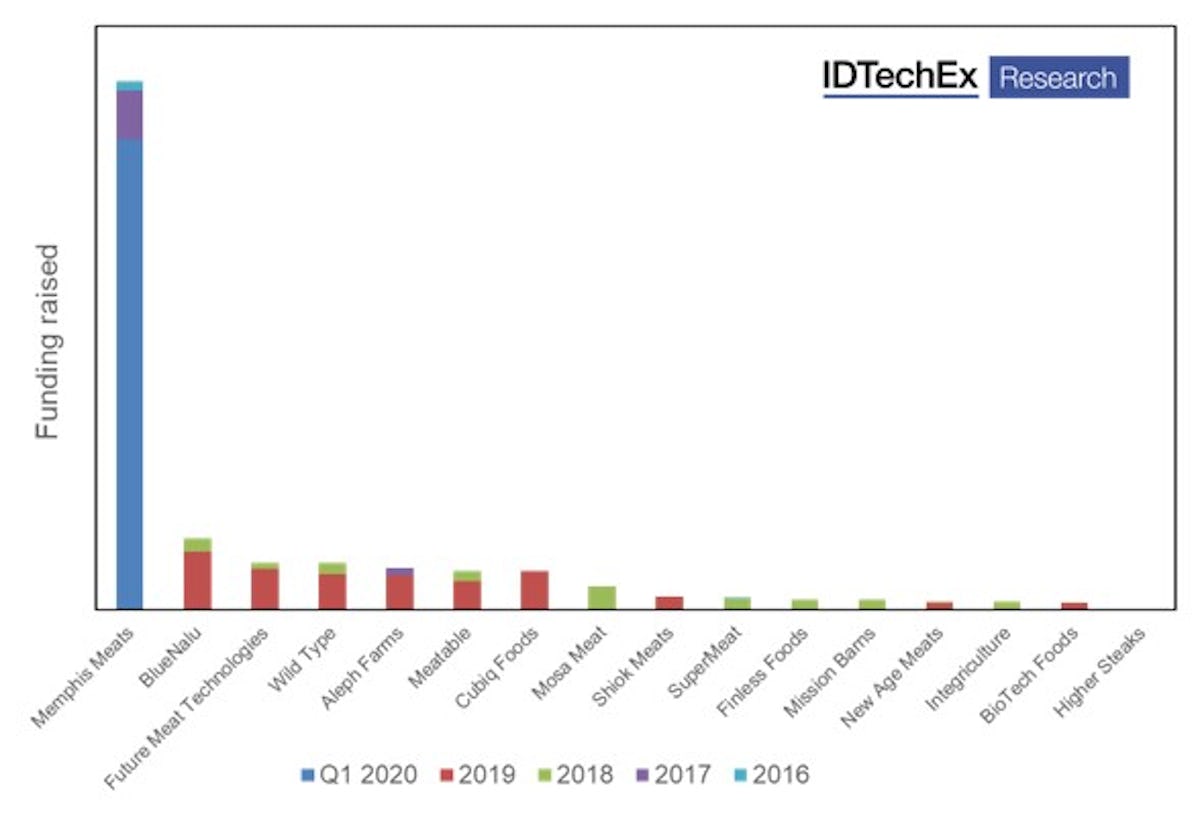 Funding raised by cultured meat companies since 2016. See "Plant-based and cultured meat 2020-2030" for exact funding values and further discussion.
One of the major problems that the cultured meat industry is facing is that cultured meat is really expensive to make. Although the science behind cultured meat production is relatively well-established, much of it has only been done at a small scale and the components are costly, especially growth medium, the nutrient-rich serum used to feed the cells. As recently as January 2020, Josh Tetrick, CEO of cultured meat and plant-based alternatives company JUST claimed that each of the company's prototype cultured chicken nuggets cost $50 to make.
However, there is no fundamental reason why cultured meat cannot be produced far more cheaply. One of the contributing factors for cultured meat production being so expensive is that start-ups have lacked the funding necessary to implement the large-scale bioreactors and equipment capable of producing cheap growth medium at scale. According to detailed cost calculations in "Plant-based and cultured meat 2020-2030", cultured meat could cost as little as $0.33 per kg to produce, using advanced bioreactor technology and recombinant protein production methods for making growth factors, the dominant cost components of growth medium. Although this is still some way off, Memphis Meats' latest funding round will likely help it implement the process engineering and scale up needed to bring down the cost of cultured meat production.
Another major barrier to the commercial release of cultured meat products is the need for regulatory approval. No regulatory regime has yet approved cultured meat for commercial sale and no cultured meat company has even submitted a bid for regulatory approval anywhere in the world. Approval in the EU takes an average of 18 months under the Novel Food Regulations and the process is expected to take about 12 months in the USA, although the exact regulatory pathway has not yet been finalised. Whilst approval could be easier in more lenient regulatory environments, such as Hong Kong and Singapore, it would still take some time and would require the mostly American and European start-ups to operate in unfamiliar territory and face reputational risks in their home markets.
The main reason why no company has yet submitted a bid for regulatory approval is that nobody yet knows exactly what their production process will look like. For this to happen, cultured meat companies will need to first develop pilot scale commercial production facilities, allowing the necessary inspections and safety tests to take place. If Memphis Meats is able to use its funding to successfully construct a pilot facility, as it hopes to do, it could be the first company in a position to apply to for regulatory approval. Once the first company has received regulatory approval, this will open the door for other cultured meat companies to bring their products to market.
Overall, Memphis Meats' latest funding round marks an exciting time for the cultured meat industry. It shows the wider investor community is taking the concept of cultured meat seriously and could go a long way towards helping to realise the dream of commercially available cultured meat products. However, there is still a long way to go for both Memphis Meats and the wider industry.
For an in-depth discussion of the science and technology behind the cultured meat industry, including a deep dive into the technical challenges facing the industry and the opportunities for commercial partners, see the recent IDTechEx report, "Plant-based and cultured meat 2020-2030". The report also contains discussions and forecasts for the market around cultured meat and a detailed chapter on the regulatory hurdles facing the industry.
Top Image: Memphis Meats have developed several prototype cultured meat products, including meatballs made from cultured cow cells and nuggets from cultured chicken cells.
PrintForwardTweetLikePinredditShare
Previous
Next