2020年6月26日 Dr David Wyatt
The bus market is at a crossroads. The pressing need for cities around the world to improve air quality, alongside commitments by many governments to address climate change, are powering plans to deliver zero on-road emission city bus fleet solutions. Over the next decade these efforts will see major cities increasingly refuse to purchase anything but zero-emission buses, as they deliver on promised zero-emission zones to protect the health of their citizens.
The new report from IDTechEx, "Electric, Hybrid and Fuel Cell Buses 2021-2040", offers their in-depth analysis of this evolving market, highlighting major developments over the past year, and presenting for the first time their extended outlook to 2040 for pure electric, plug-in hybrid and fuel cell buses.
Over this twenty-year period, IDTechEx suggest uptake of zero-emission buses will primarily be of pure battery electric models, with plug-in hybrid rapidly losing market share and fuel cell electric buses taking only a small fraction of the market, as they fail to offer the same total cost of ownership benefit as battery electric buses. There remain significant cost barriers as well as uncertainty on how the necessary supply of cheap green hydrogen will be produced to deliver FCEVs promised environmental and economic credentials. On a CO2 footprint basis, the use of grey hydrogen (hydrogen produced from fossil fuels with no CO2 capture), makes no sense. Currently 96% of hydrogen produced is grey hydrogen.
Progress is being made on the development of FCEV buses; however, they are chasing a moving target. With falling battery pack prices, improving charging infrastructure and bus schedule/charging optimisation for BEV, by the time sufficient hydrogen infrastructure is available to enable the widespread commercialisation of FCEV buses their deployment may be limited to long daily mileage applications.
China has led the world in bus electrification and will continue to do so over the next 20-years. However, as a result of the subsidy phase-outs and the increasing saturation of electric buses in Tier 1 cities, IDTechEx project the electric bus sales in China will stabilise at a lower level than during the subsidy boom years, after the biggest decline yet in 2020 from the COVID-19 pandemic. 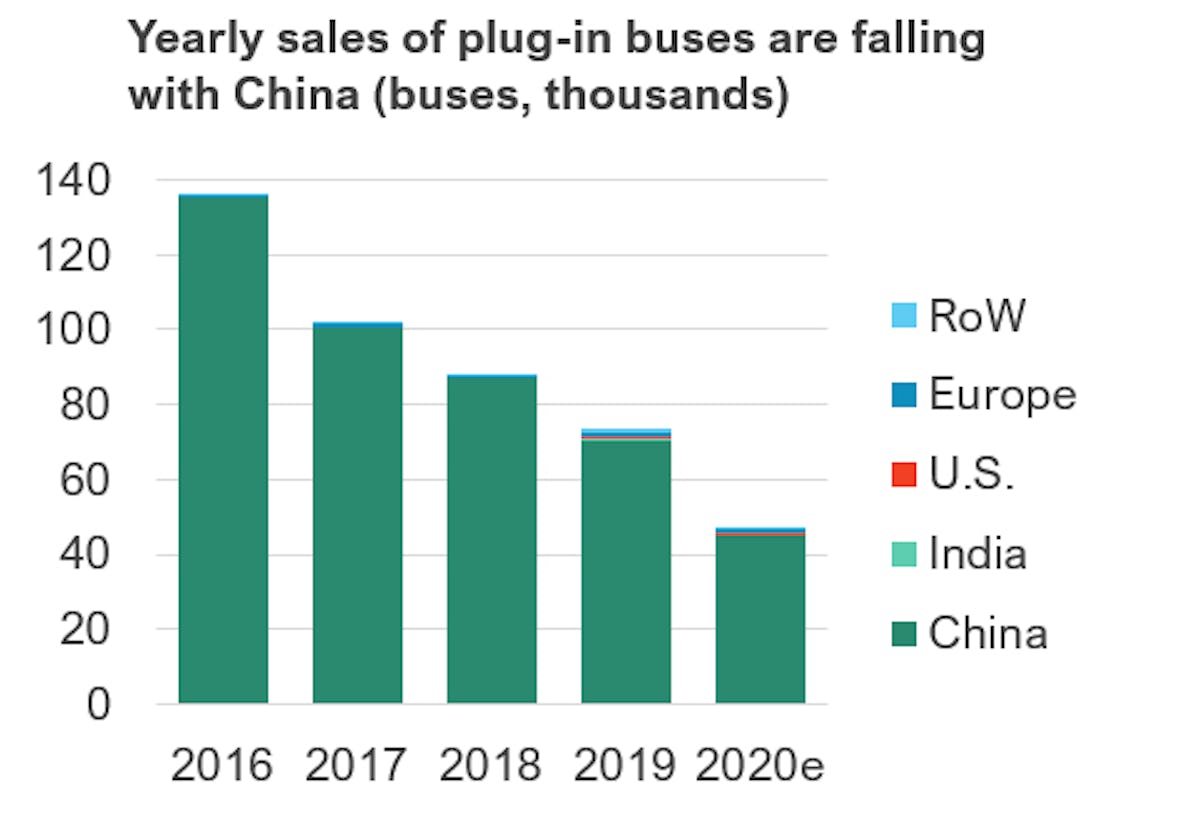