2013年7月25日 Dr Harry Zervos
When one thinks of the most prominent applications of energy harvesting and storage in the transportation sector, waste heat recovery for cars in order to optimize fuel efficiency and batteries for electric vehicles instantly spring to mind. But cars are not the only vehicles that can benefit greatly from innovation in harvesting and storage. In this article we will briefly look at implementations in the rail transit sector, and the kind of technologies that are making their way onto trains, railways and waysides in order to reduce power consumption, maintenance costs and reliability of train services.

Harvesting vibration is probably the most obvious source of energy in a railway environment. Stony Brook University's work in this space was recognized with an IDTechEx "Best Application of Energy Harvesting" award in 2012. The Stony Brook team developed a new type of energy harvester that converts the irregular, oscillatory motion of train-induced rail track vibrations into regular, unidirectional motion, in the same way that an electric voltage rectifier converts AC voltage into DC.
Perpetuum, a leader in vibration energy harvesting, has already commercialized micro-generators specifically designed for the unique demands of transportation systems. Key products include a rail Harvester optimized for the vibration spectra typically seen in a rail environment as well as rail sensor nodes (including temperature and vibration sensors) to detect wheel flats and bearing degradation. At the end of June 2013, Perpetuum received an order from Southeastern Railways in the United Kingdom to supply wireless sensor systems for its entire Electrostar train stock. The sensor systems will monitor wear of the bearings and wheels to help maintenance engineers determine when maintenance is required.
Perpetuum is also offering solutions for monitoring not only the wagon but also its cargo (temperature, pressure, leakage, security) and communicating the data, either long range through GPRS transmissions or to the locomotive cab through wireless.

The applications described above consume power up to a few tens of mW. There are other energy sources in trains though, where the level of energy that can be harvested and stored is much higher. For example, in order to store the large amounts of energy available when trains brake, Bombardier has worked with Maxwell Technologies to develop the Energstor, a stationary "wayside" unit that incorporates an ultracapacitor array that is capable of storing up to two kilowatt hours of electrical energy generated by a rail vehicle's braking energy recuperation system. 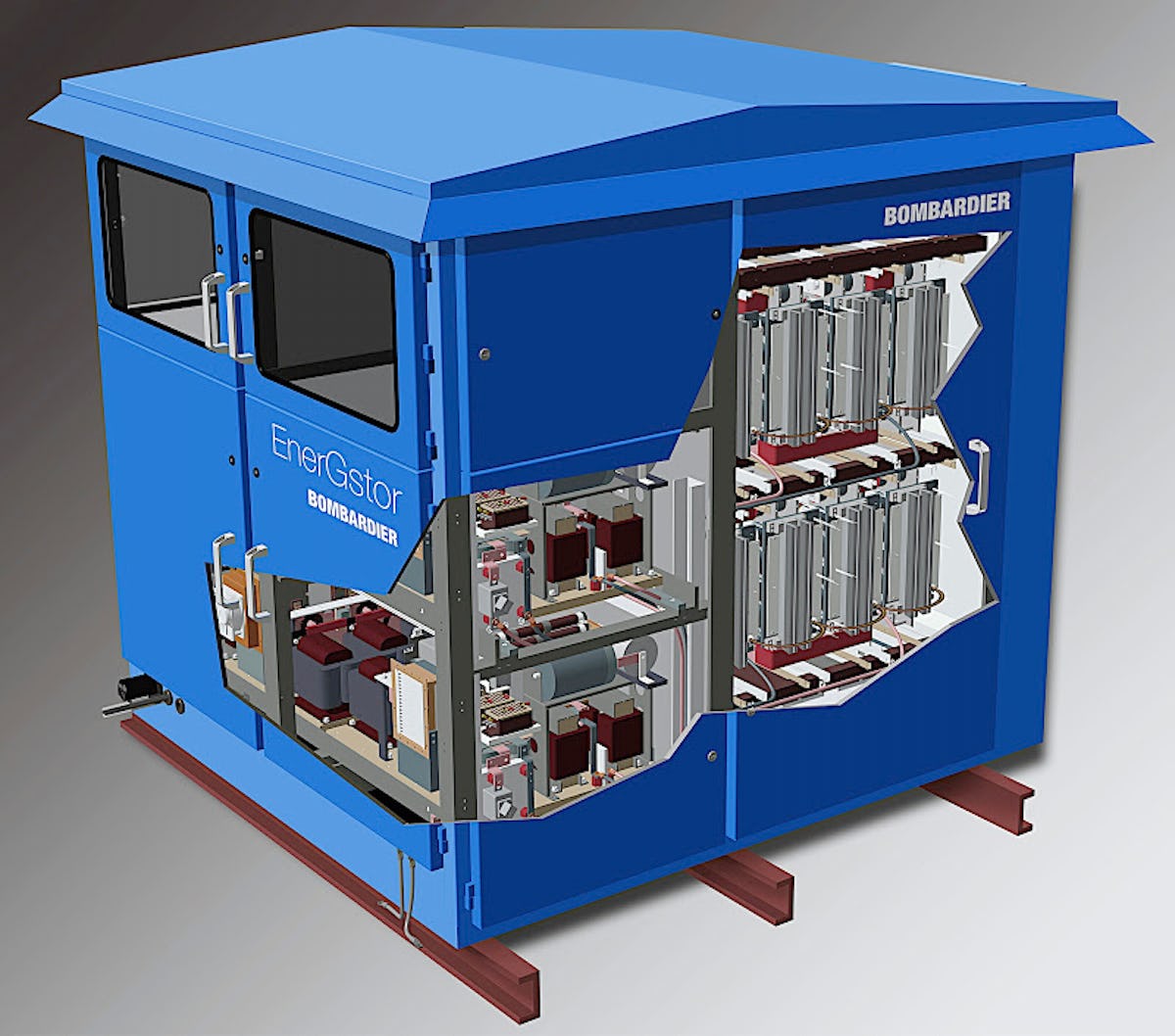 The Bombardier EnerGstor, incorporating supercapacitor arrays by Maxwell Technologies
Recuperative braking is accomplished by running the vehicle's electric motor backwards to stop the vehicle with the motor's resistance. An electric motor running backwards also acts as an electric energy generator or dynamo that converts kinetic energy into electrical energy that can be stored for future use. The EnerGstor system offers multiple benefits to rail system operators, including:
For more information on energy harvesting, storage and wireless sensor technologies and their implementation in railway, automotive and aerospace applications, attend Energy Harvesting & Storage USA in Santa Clara, California on November 20-21 - www.EnergyHarvestingUSA.com