2019年5月22日 Dr Khasha Ghaffarzadeh
Since 2014/2015 IDTechEx Research noticed that the centre of graphene research and commercial activity was shifting to China. This trend had shown itself in publication and patent numbers, as well as in investments and capacity announcements. The precedent was also there: China had stepped in late but became a leading territory in commercialising carbon nanotubes (CNTs).
Chinese graphene firms were amongst the first to claim application success. Large volume sales into the energy storage sector were reported and now IDTechEx Research hear that Chinese companies are supplying graphene into the flagship product of a major mobile phone brand. This is reported to be a 200+ ton order. They are also marking strong progress on anti-corrosion coatings, heating (on-textile, underfloor, wall, etc) amongst others. To learn more on these trends please refer to the IDTechEx Research report Graphene, 2D Materials and Carbon Nanotubes: Markets, Technologies and Opportunities 2019-2029.
An important question is whether this advantage will represent a permanent state of affairs or not? There are many reasons and signs to think not. First, local advantage matters both in customer development and in securing supplier contracts. This is especially true in nanomaterials and in times when product development still requires a close collaboration between the supplier and user. Chinese players are expanding their sales and marketing presence in Europe; they are in the process of clearing some regulatory hurdles, but they still must play catch-up. Non-Chinese players, especially small to medium sized graphene firms, face major barriers in entering and exploring the Chinese markets. These barriers are of a regulatory, cultural, and organizational nature.
The state of the end-use industry and its value chain will also impact the prospects of each locality. For example, Asia (including and increasingly China) is the leading territory in energy storage (ES) production. This will benefit local suppliers. China itself is a major player in ES with a growing local manufacturing base. China is also a leading in the production and sale of electric vehicles, which also translates into opportunities for local players. Europe and the US are, however, still strong in high-value chemicals and plastics and automotive manufacturing. This gives western suppliers the chance to connect with end users and markets, IDTechEx believe the situation differs on an application-by-application basis.
Second, non-Chinese players are also expanding, fast. In the US, one of the older graphene producers has secured a supply contracted into the automotive industry and installed additional capacity. In Canada, a producer is pursuing an aggressive scale-up and vertical-integration plan; their ambition appears to be making graphene widely available and highly affordable. These products are being positioned as the next-gen of high-volume carbon black. In Europe, some companies are reporting that demand has outstrip their capacity to supply and are therefore preparing to scale up. In Australia too companies are reporting progress. The sum of all these activities and trends is that the centre of gravity can tile away from China.
Third, excellent expertise and knowhow exists outside China (although many Chinese research institutes regularly report cutting edge results). Research grants have created communities of trained scientists and engineers and have led to the build-up of laboratory and pilot-scale equipment. The investments have also created growing academic-industry networks. These networks are often based around various centres of excellence who are increasingly positioning as specialised providers of vital application development knowhow to help end users shorten their development times and risks.
IDTechEx Research have analysed examples of how the landscape might be reconfigured. It appears that, if plans are fulfilled, China (TW included) will no longer hold the largest nominal capacity. Other indicators are also showing signs of rebalancing. For example, still the largest revenues are claimed by Chinese firms however other companies are also transitioning into commercial sales.
To learn more see the IDTechEx Research report Graphene, 2D Materials and Carbon Nanotubes: Markets, Technologies and Opportunities 2019-2029. It provides the most comprehensive analysis of graphene, CNTs and 2D materials. The report offers detailed technology reviews, up-to-date assessment of past, present and future of prices and production capacities, insightful yet critical application analysis, and ten-year segmented market forecasts segmented by application. This report also has extensive coverage of the industry players. 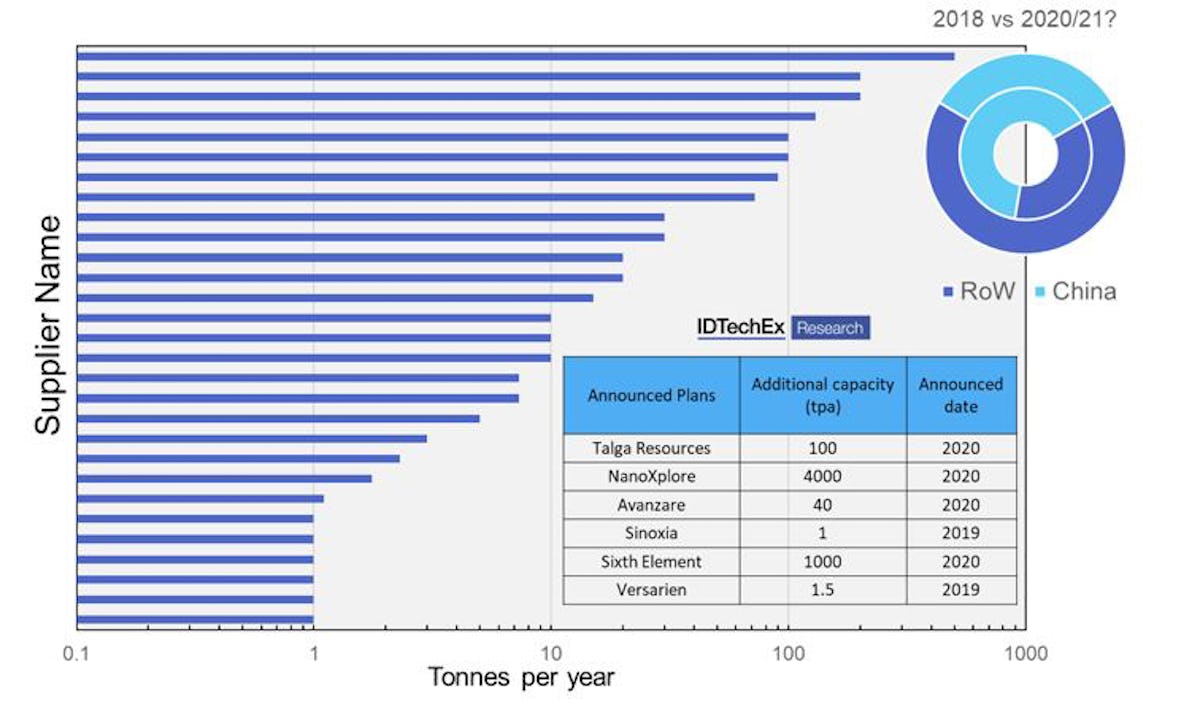