2016年8月16日 Dr Peter Harrop
As detailed in the IDTechEx report, Mild Hybrid 48V Vehicles 2016-2031 this option will become a huge business from 2017 as Ford, Hyundai, Bentley, Volkswagen, Audi, Geely and many others adopt them as the most cost-effective way of meeting 2025 and 2030 carbon dioxide emissions regulations while sharply improving economy - even improving performance in some respects. A mild hybrid is a vehicle with torque assist from an electric motor: this permits the downsizing and down speeding of the engines of conventional vehicles - particularly C category subcompact and above - by up to 60% to prevent them becoming illegal.
It used to be thought that B category cars and smaller could be modified to stay legal without 48V systems but now there is very interesting work by a partnership in the UK showing that 48V may be best for the many of the babies as well. Known as Project FEVER (Forty Eight Volt Electrified Rear-axle), the consortium will help to further introduce advanced mild hybrid functionality to mainstream vehicles at reduced cost to that of high voltage plug-in hybrid or pure electric vehicles and far easier that the start again EV approach. The electrified rear axle technology will be a step toward enabling OEMs to further improve both regulated and real world fuel economy in city driving conditions. The objective of the two-year project is to achieve a CO2 reduction of up to 15% through the development of two through-the-road hybrid demonstrator vehicles.
Mercedes-Benz is introducing the 48V system modification on almost its entire range over the next few years. It is an incremental, not a disruptive technology. You keep most of the conventional powertrain. The first application will be a new M256-designated straight six petrol engine that will be introduced in the 2017 facelift of the S-Class: it includes a Boost Recuperation Machine BRM - a reversing electric motor integrated directly to the crankshaft, making it an Integrated Starter Generator ISG. This can act as an alternator, boost motor and a starter - allowing the engine to fire up in just a fraction of a second - but it will also be able to add assistance and efficiently harvest electricity through regenerative braking. Regeneration of heat and wasted motion into electricity is the name of the game now as we await energy harvesting active suspension, a 1kW turbine in the exhaust, thermoelectrics and more for on-road vehicles. See the IDTechEx report, High Power Energy Harvesting: Off-Grid 10W-100kW 2016-2026 for more on that.
The Mercedes boost recuperation machine 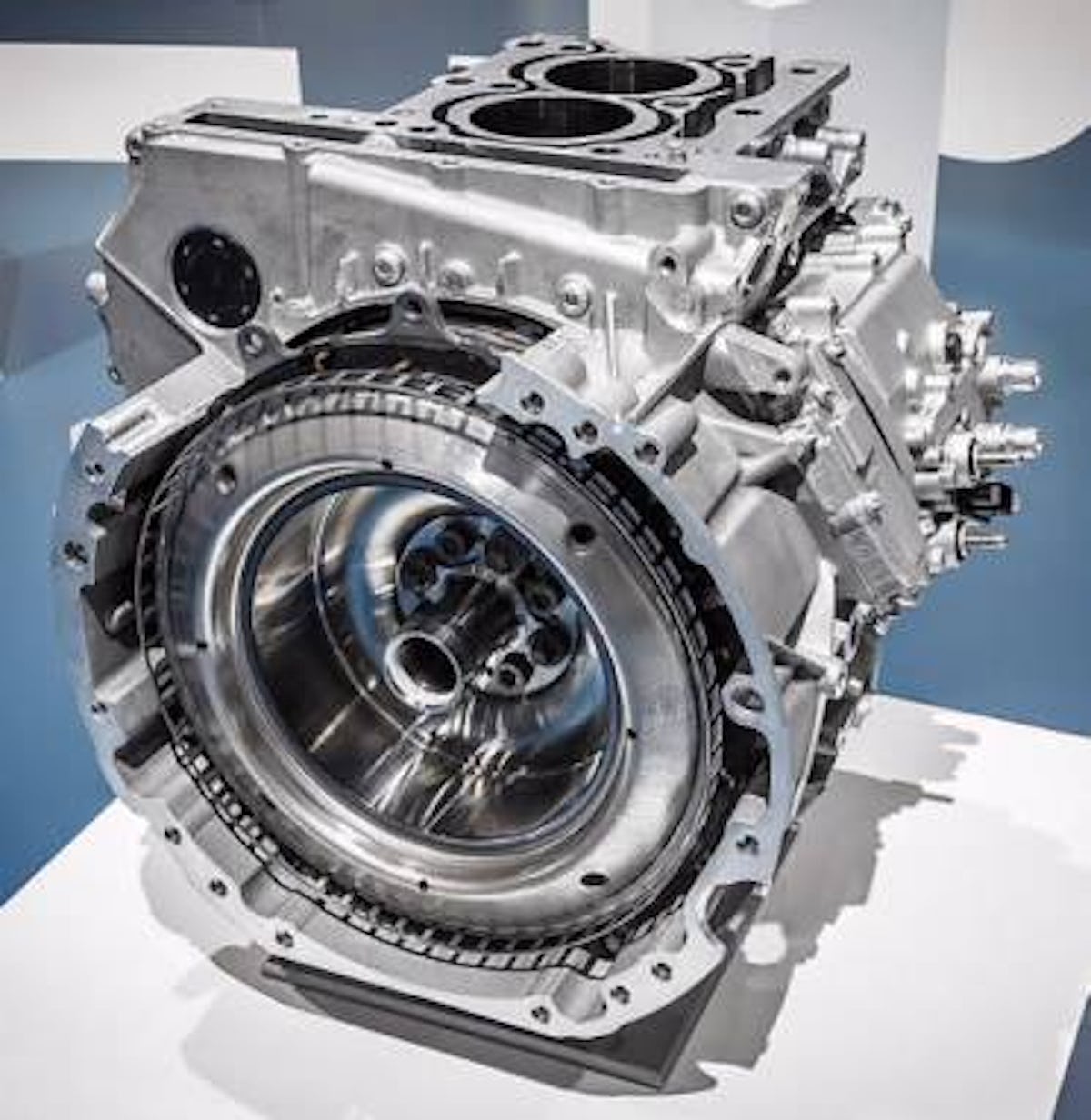 Source Mercedes
The new straight six will progressively replace V6 engines throughout the Mercedes range. The BRM can add up to 14.2 kW/19bhp of assistance and harvest up to 14.9 kW/20bhp during regeneration, delivering immediate economy gains of between 10% and 15%. There will be more later. IDTechEx reports advances capable of providing 20% in due course as the 12V battery is abandoned and electrification and regeneration are greatly extended.
Unlike Mercedes's high-voltage hybrid systems, there is no way of disconnecting the motor from the engine, so it cannot operate under electric-only power, but at least that means they can get by with only a 0.9kWh 48V battery, one thirtieth of the size of the ones in the latest pure electric cars. Because of this, it seems likely that Mercedes cars fitted with this electrical assistance system will not carry hybrid branding, although they have confirmed the 48V set-up will in effect replace all of its non-plug- in hybrids. Others plan up to four pure electric modes for their planned 48V mild hybrid powertrains though quite when is, as yet, unclear. In a smaller car, a 1kWh battery or thereabouts can cope with engine-off silent takeoff, parking and some silent creeping in traffic, greatly enhancing the driver experience.
The new six-cylinder petrol engine is based on the same architecture as the OM654 four-cylinder diesel that first appeared in the new E-Class. Mercedes driveline engineering boss Jürgen Schenk says that it will be joined by a diesel equivalent using the same integrated starter/generator later. A four-cylinder petrol version with a less advanced belt-driven starter/generator BSG will also be launched in 2017. All Mercedes cars using longitudinally mounted engines will have some form of mild hybrid assistance shortly afterwards. For more on the electric motors and rotating electrical machines involved, see the IDTechEx report, "Electric Vehicle Traction Motors, Belt Driven & Integrated Starter Generators 2016-2026". They are becoming a huge market not least because two motors per full hybrid and pure electric vehicle is becoming the norm and there are even prospects of two BRMs per 48V hybrid vehicle in many cases.
Raghu Das CEO of IDTechEx says, "It is even possible that, for a period of time, 48V mild hybrids will outsell full hybrid and pure electric on-road vehicles to briefly approach a $500 billion business. They are very much an idea whose time has come. However, the end game is still pure electric vehicles and we even have extreme forms of these arriving already - the so-called Energy Independent Vehicles EIV - from Nanowinn, IFEVS and promised by Hanergy, Immortus and many others. Some are solar only and others use many technologies we analyse in our reports and consultancy. People were surprised when the 2016 American Solar Challenge was recently completed in rain! The changes in the EV industry are now so rapid that we are constantly revising our forecasts in the light of new inputs, adding new EV categories as this robust industry grows and fragments. Even forecasting when 48V mild hybrids have pure electric modes is tricky. One day they will be part of the EV scene too."
PrintForwardTweetLikePinredditShare
Previous
Next