2013年9月16日 Dr Peter Harrop
By Dr Peter Harrop and Mayumi Kozakai, IDTechEx Japan.
The Japanese are working very hard on thermoelectric energy harvesting from tiny forms for use on hot running electronics components the 1.5 kW versions for use on furnace flues etc. Mostly, they see Automotive ATEGs as likely to be the first volume production in about eight years. This article has extracts from a full analysis available on the IDTechEx Market Portal.
As elsewhere in the world, in Japan, thermoelectric cooling by Peltier effect is a commercial success and now the suppliers and researchers seek to make thermoelectric energy harvesting by Seebeck effect a commercial success, given that, today, it is not. When success is claimed it usually refers to loss making provision of a few hundred or a few thousand handmade devices using micromachining. Perhaps those using US Government money such as Department of Defense and DARPA and ARPA funds sometimes see a profit from such meagre output but others do not.
In interviews carried out in September 2013 in Japan, IDTechEx has been able to enhance the knowledge revealed in its report on the subject. Here are a number of the companies and institutions involved, what they are doing and how they see the future. 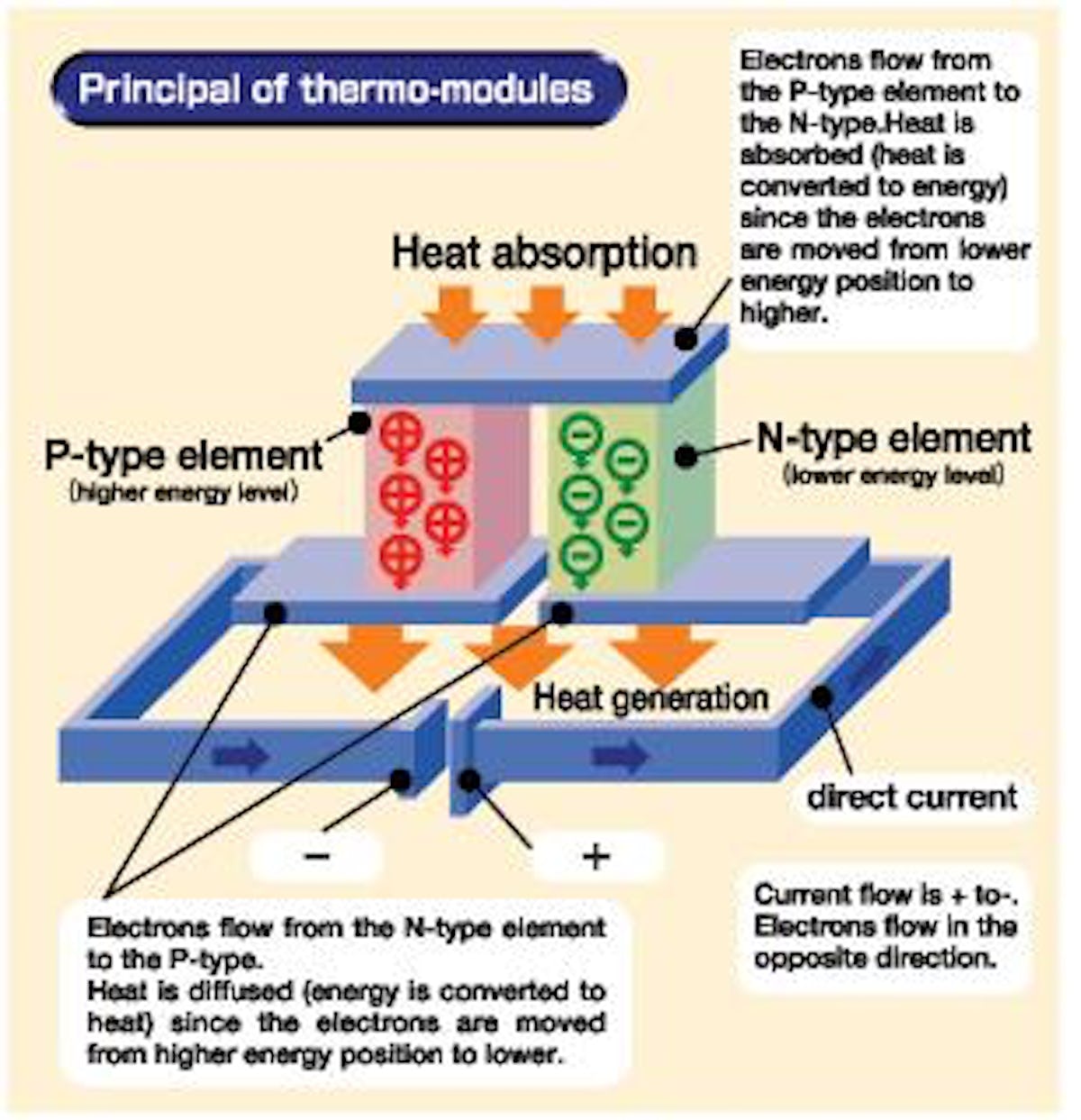 The National Institute of Advanced Industrial Science and Technology (AIST), led by President Chubachi, is a public research institution funded by the Japanese government to a large extent. The present AIST is a rather new research organization established in 2001. However, AIST and its predecessor organizations have been contributing to society through continuous advancement in technologies and support to Japanese industries since 1882.
AIST currently has 20 people working on thermoelectrics only four of which are on permanent staff. In 2012, a new 10 year program, "Thermal Management" was instituted at AIST.
Formulations of the future
Different thermoelectric materials will be used for different applications in the view of AIST. For example, the car industry will not tolerate toxic bismuth and it fears the unstable price of tellurium whereas AIST thinks its work with Argonne National Laboratories and NorthWestern University on PbTe based thermoelectrics which have very good ZT will lead to other niche applications. For the future, AIST likes Zn4Sb3 based thermoelectrics for low price and low toxicity with acceptable ZT and efficiency.
Favoured applications
Fuel cells are no longer seen as one of the best potential outlets for thermoelectric harvesting, 120C geothermal being an example of a favoured application, partly because it is at the sweet spot of temperature where enough energy can be converted but the device life is not threatened as it is with natural gas conversion which, "makes no sense" they say. 500C is "hard on reliability". AIST notes that Marlow are impressive and have much more on their website on thermoelectric harvesting recently.
Organic thermoelectrics
Traditionally, organic thermoelectrics are extremely inefficient put they can be flexible and even transparent and enhanced by other forms of energy harvesting with these attributes such as polymeric piezoelectrics. The AIST approach is two-fold, both being in flexible form.
1. CNT composite film
2. PEDOT: PSS
AIST is involved in two relevant consortia.
1. The Energy Harvesting Consortium dates from 2010 and involves, for example, Yamaha and Murata developing large devices.
2. The Waste Heat Recovery Consortium mainly addresses automotive thermoelectric generation ATEG. Professor Iida of Tokyo University of Science is involved.
TES New Energy
TES New Energy is a spin off from AIST, taking the sensible view that efficiency is not everything and concentrating on CaCo oxide which is seen as relatively cheap and environmental. It achieves $100 per watt and makes units up to 40W for camping and emergency use. The temperature difference is enhanced by pumping in river water. 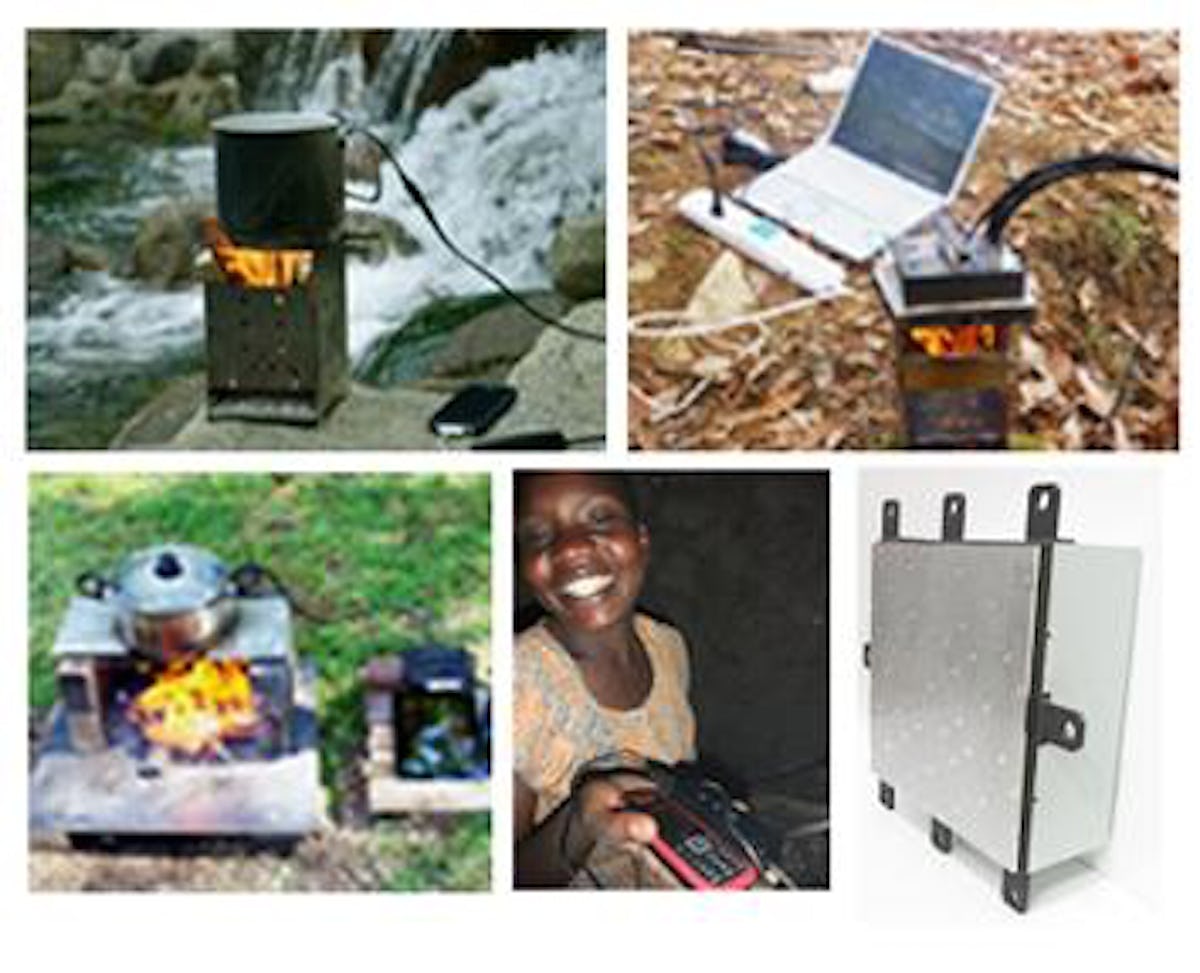 Source TES New Energy
The website says,
The year 2000 witnessed our discovery of an oxide compound we have since developed into a material capable of converting heat-waste into electrical energy at unprecedentedly high temperatures. Thus, after a decade of research, we are pleased to confidently announce the establishment of TES NewEnergy (Thermo Electric Systems and NewEnergy).
TES NewEnergy is born as a result of the work of AIST ( The National Institute of Advanced Industrial Science and Technology).
TES NewEnergy brings you a world of fresh cost-reducing possibilities, creating clean energy for incinerators, process plant , industrial furnaces, shipping, fueled vehicles, cookers/water-heaters, ubiquitous machinery etc. We can also provide emergency or back-up energy and even utilize geothermal energy.

The EnOcean Alliance, which has wireless, battery-less wireless building control sensors and actuators in over 100,000 buildings in the world, operates in Japan and there is no indigenous alternative. For EnOcean, electrodynamic and photovoltaic harvesting covers almost everything with thermoelectric a poor third and piezoelectric harvesting not used at all. Some EnOcean partners make heating-radiator wireless sensors that can actually turn the valve as well and that is also an interest for Japanese manufacturers. For example, Panasonic is developing a 7W thermoelectric unit that fits in a 10 centimeter heating pipe.

KELK has the record for thermoelectric efficiency in the view of AIST. IDTechEx visited KELK and obtained working samples. Their entirely machined thermoelectric coolers are exceptionally efficient at 7.2% so they are exceptionally low power. They are used in all of the semiconductor fabs in the world as part of the process. There are various other cooling applications such as lasers in telecoms and now they seek to add sales of thermoelectric harvesters based on the same "unique material" they have developed. Multi mode energy harvesters are being developed, incorporating many forms of energy harvesting together with thermoelectrics on the basis that, during a given duty cycle, one or another will be operating well.
They focus on industrial such as getting electricity from the exit flues of industrial furnaces. Their standard products vary from 100 microwatt (2.5oC temp difference) 2-3 milliwatt (10oC difference) 7X7X1 mm harvesters for wireless sensors and WSN nodes etc to large 200W ones for furnaces etc. Their ATEG (ie automotive) are still not viable or ready for market. They are seen to be potentially useful on the parent company's construction vehicles with huge 1.5 kW units one day.

Murata has a thermoelectric radiator valve adjuster, supplies EnOcean Alliance and has multiple energy harvesting modules (KELK think they are electrodynamic+thermoelectric+piezoelectric), something KELK are also developing. Murata is considered by AIST to be the most advanced in very large thermoelectric energy harvester development and it is also addressing the main problem with Wireless Sensor Networks which is power for the little nodes.

Toyota seeks 45% efficiency in a hybrid car partly by adding ATEGs but some planned range extenders will not be very hot. It also seeks thermoelectric cooling for vehicle HVAC because it will become more reliable and lighter in weight, but it says better non-toxic materials are needed. AIST nevertheless thinks that this cooling may be a better thermoelectric prospect than ATEG.
Top image: Business HR
For more read Energy Harvesting and Storage for Electronic Devices 2012-2022
Electric Vehicle Charging Infrastructure 2012-2022: Forecasts, Technologies, Players.
And attend Energy Harvesting & Storage USA 20-21 November 2013, Santa Clara, USA
PrintForwardTweetLikePinredditShare
Previous
Next