2011年11月18日
At the Energy Harvesting & Wireless Sensor Network (WSN) awards dinner on November 15 in Boston, USA companies were recognized for making significant technical or commercial progress with these technologies. Three eminent academics judged the entries:
The awards are part of the IDTechEx event on these topics - which was attended by over 360 people from 16 countries and featured 40 exhibitors on Nov 15 and 16 201(http://www.IDTechEx.com/Boston).
In summary, the winners for each category are as follows:

This category was judged on which organization had made the most significant technical achievement in energy harvesting over the past 18 months. It is awarded to the National Institute of Aerospace, in collaboration with NASA Langley Research Center, North Carolina State University, Stony Brook University, and TRS Technologies, for a hybrid piezoelectric energy harvester.
An innovative hybrid piezoelectric energy harvesting transducer (HYPEHT) has been developed. The device utilizes synergistic integration and force-amplification of two types of piezoelectric multilayer elements to couple more mechanical energy, produce more electrical charge, and yield enhanced energy conversion efficiency. The HYPEHT yields 19 times more electrical energy output than a same-sized "31"-mode flextensional transducer and 100 -1000 times more than a same-sized bimorph or sandwich piezoelectric beam. It achieves 26% mechanical to electrical energy conversion efficiency (5 times higher than that of the state-of-the-art piezoelectric transducers).
Dr Tian-Bing Xu, National Institute of Aerospace 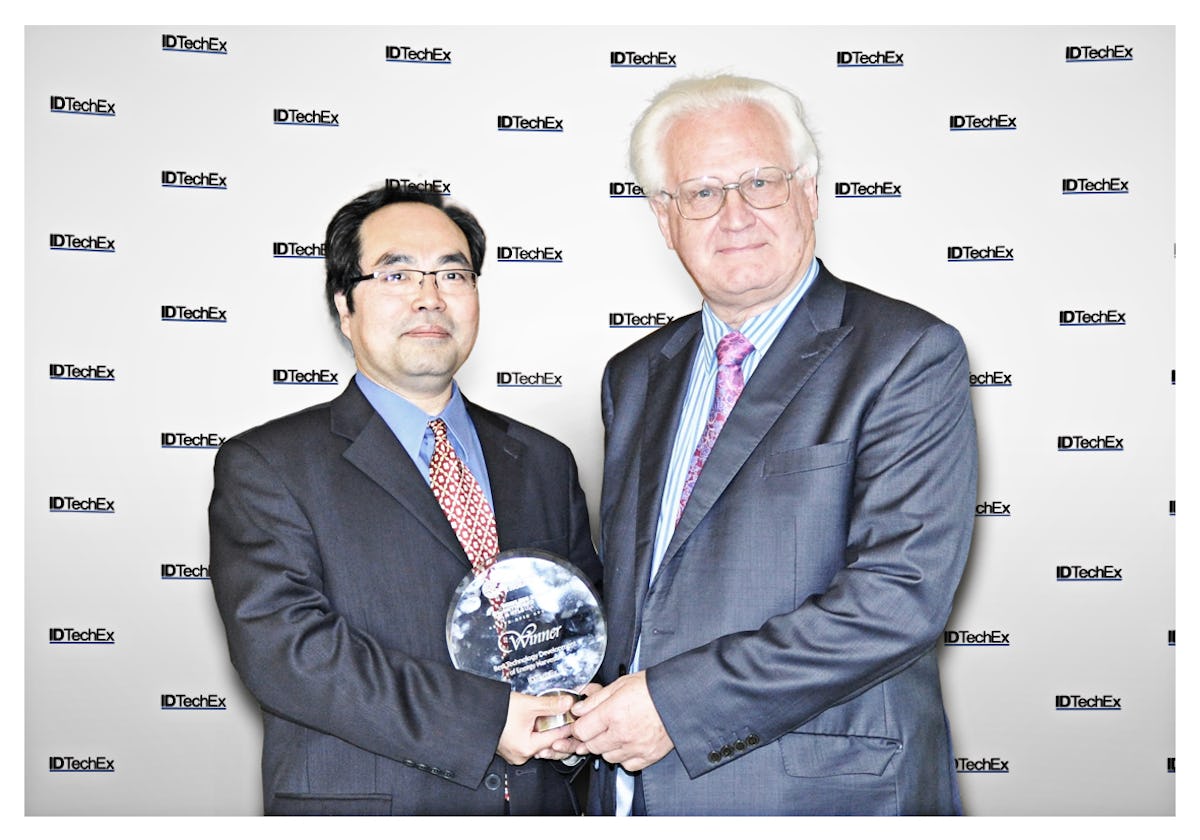 Most domestic appliances carry an energy label indicating their efficiency in using electrical energy. Hobs for electric or gas based cooking do not receive such labels because their efficiency was found not to vary much across the market. New technologies for energy-saving cooking are expected to be part of a new EU directive, introducing an energy label for all hobs, because they are considered a major energy savings potential.
MSX Technology won this award for its multisensory cooking technology which has proven an energy reduction for cooking of 50% or more, confirmed by the Swiss Federal Laboratories (EMPA) and VDE, the German Association for Electrical, Electronic & Information Technologies.
Energy efficient cooking is based on controlling the cooking process: A wireless sensor is embedded in the lid of a cooking vessel, transmitting temperature and acoustic data to the hob, which controls the cooking process for best result at minimal energy consumption, according to the respective type of food. The user just pushes a button to start the fully automated cooking process.
A major inhibitor to this technology so far was the energy supply for the sensor. Battery compartments are bulky and hardly remain dish-washer proof over many years and battery replacements. Micropelt's thermal energy harvesting technology allows for a fully embedded and sealed cooking sensor for the life time of the gear. A single 6 mm² Micropelt thermogenerator powers a fully self-sustaining MSX cooking sensor just from the normal process heat.
MSX smart cooking sensor powered by Micropelt thermogenerator 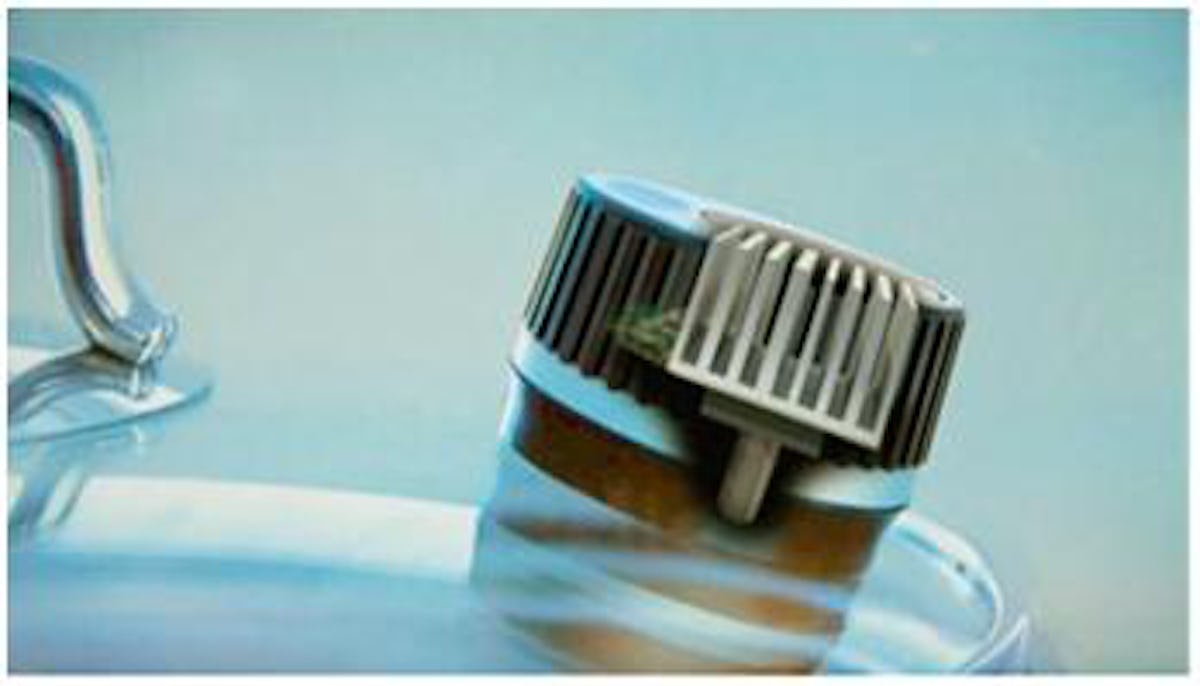 One judge commented, "This innovative approach results in energy efficient cooking by using a fully embedded (i.e., dishwasher safe), self-powered and wireless sensor to automate the cooking process. A cool combination of an advance in a "domestic" technology with energy conservation." Another judge described it as a "Great application with several benefits."
Burkhard Habbe, VP Business Development, Micropelt GmbH 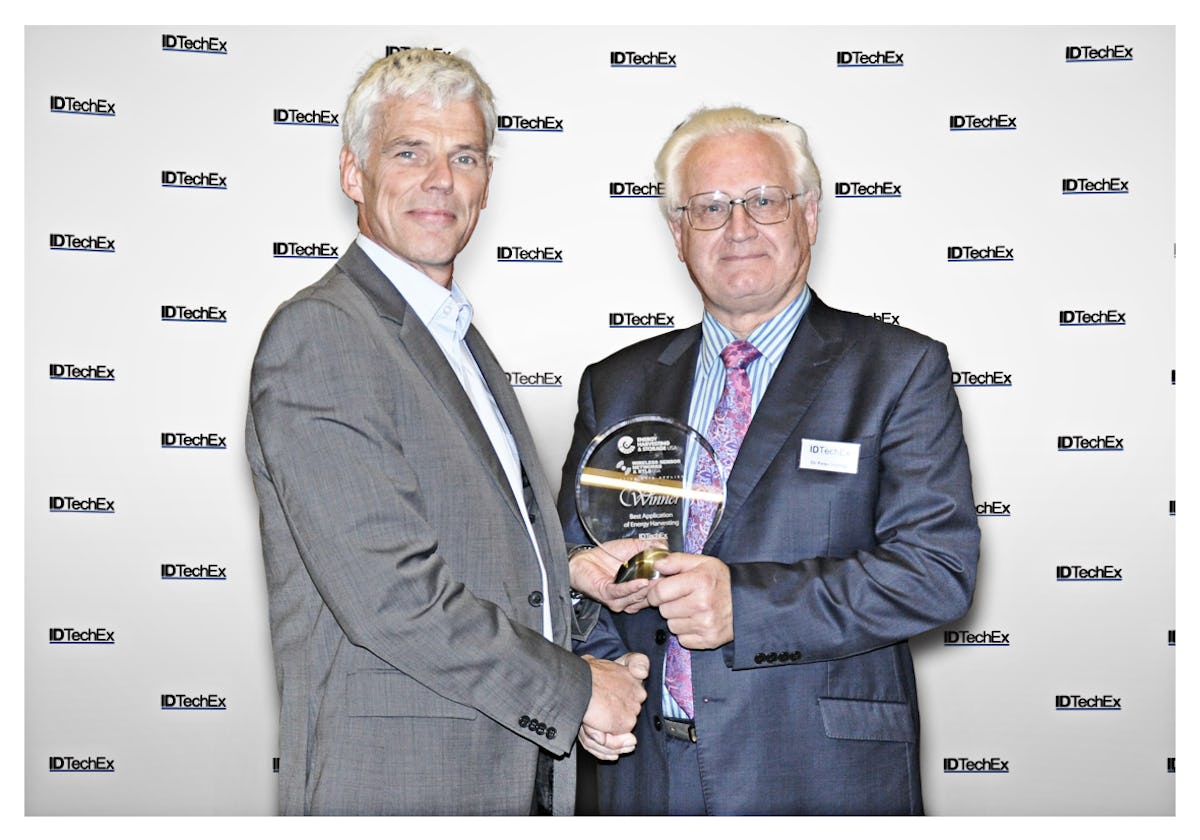 Bronze Craft Corporation won this award for its smart window sensor for energy conservation in commercial buildings. The US Department of Energy estimates that 35% of a commercial buildings energy use is attributed to lighting. The Smart Sensor measures the daylight entering windows and signals the lighting control system to shut off lights nearest to the window when light levels equal lighting levels prescribed by the US Department of Labor's OSHA standards.
The company report, "We have built a lighting control system in our manufacturing offices which has demonstrated a 40% savings in lighting use. The Smart Sensor also incorporates a moisture sensor which detects leaky windows due to damaged weather seals or improper installation. Condensation on windows is detected as well. This allows building owners to correct windows that waste energy or provide conditions conducive to mould and mildew. The Smart Sensor measures thermal gains at the window and allows the HVAC controls to compensate for these heat gains. When thermal gains at the window diminish, cooling loads can be reduced and added fans to circulate the existing cool air more evenly. With improved cool air circulation, our office occupants near the windows are no longer hot while occupants away from the windows are cold in the summer." The sensor is powered by a solar cell.
One judge reported, "This approach combines a number of different technologies (solar, capacitors, wireless communications, etc) to provide security and energy efficiency to buildings. The company's control systems are already in use in a number of school systems. It is a great combination of WSN with energy conservation."
Marc Sirote, Senior Design Engineer, and Michael Craig, Electrical Engineer, Bronze Craft Corporation 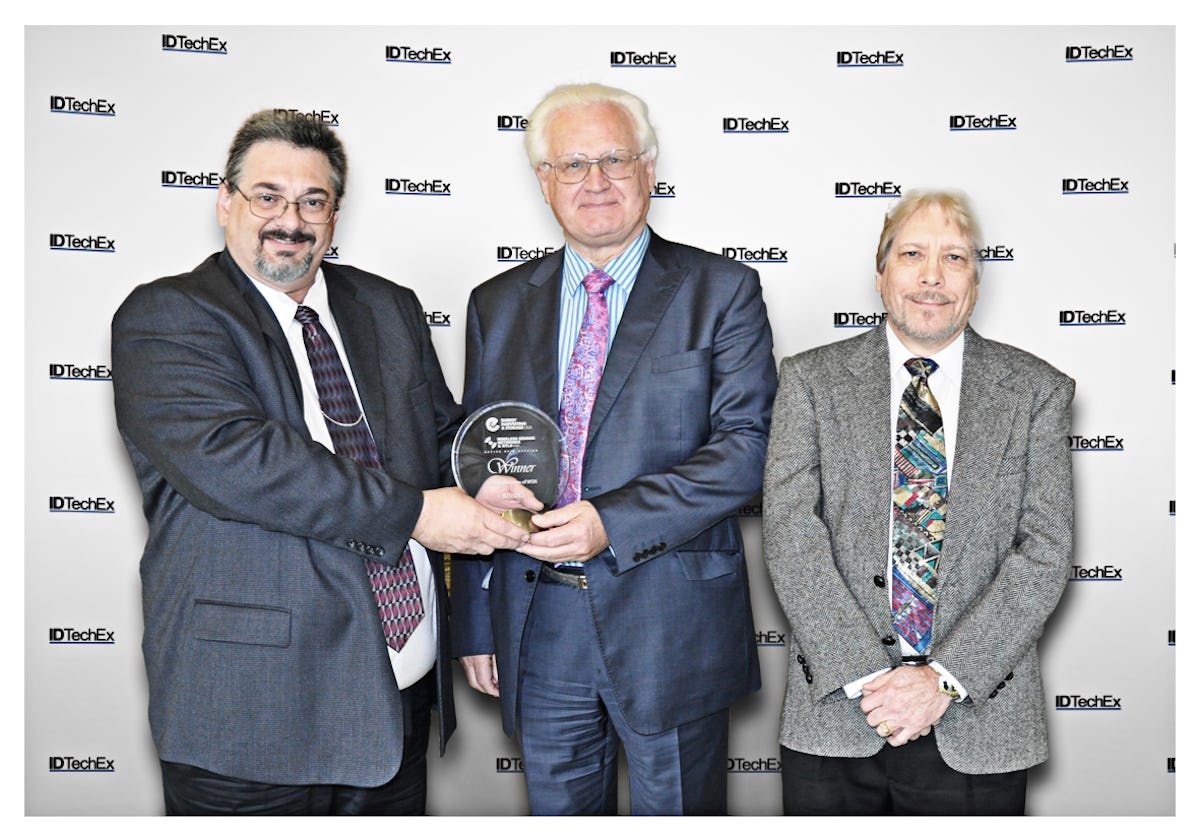 This award was voted for by attendees, who chose the company that they thought was the most impressive on the exhibit floor. It was awarded to Infinite Power Solutions, a US clean-technology company and global leader in manufacturing solid-state, rechargeable, thin film micro-energy storage devices for embedded applications. Infinite Power Solutions THINERGY® Micro-Energy Cell (MEC) products provide unprecedented efficiency in micro-energy storage and uniquely enable ambient energy-harvesting solutions to create miniature, autonomous, perpetual power supply solutions. THINERGY Ultra-Thin MECs are ideal for harvesting and storing all forms of ambient energy such as solar, thermal, RF, magnetic and vibration energy—providing a safe, reusable and clean energy source that can deliver a lifetime of power to electronic devices and systems.
Timothy Bradow, VP, Marketing, Infinite Power Solutions 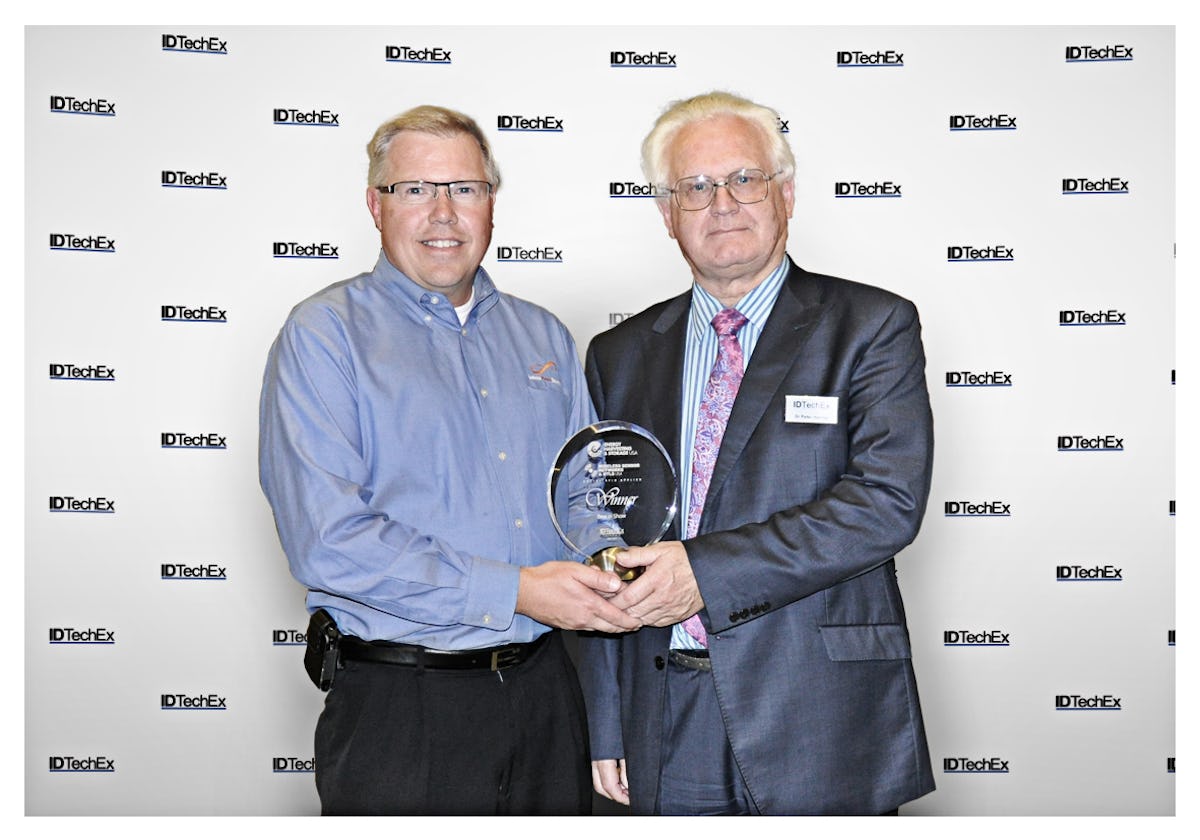 Of the academic posters on show at the event, the winning poster was awarded to David Pera and Pedro Gomes of the University of Lisboa, for "E-Turbine - Eolic Concentrator for Energy Harvesting in Highways and Urban Environments." One judge commented, " Very new and innovative. Lots of applications."
David Pera, University of Lisboa, Portugal 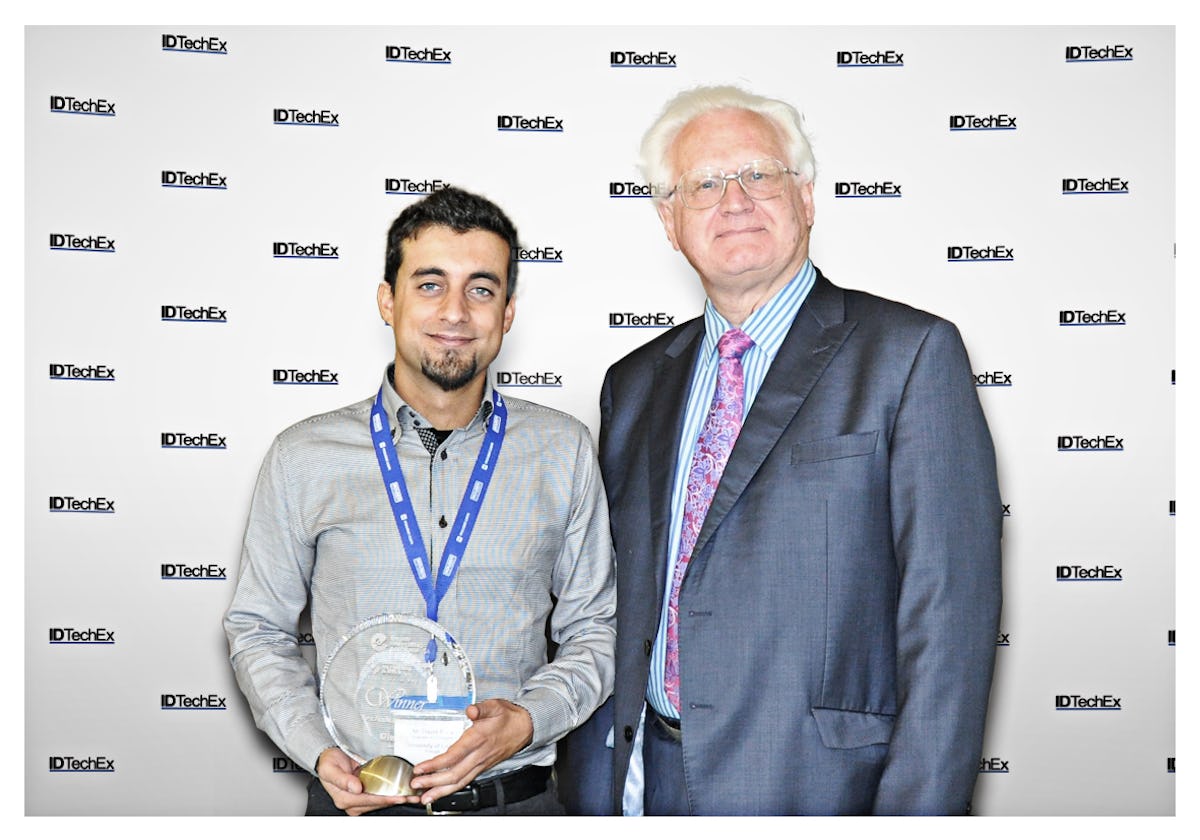 For more information about the next IDTechEx awards on this topic, see www.IDTechEx.com/Boston. The next awards for this industry will be held at the European version of this event in Berlin, Germany on May 15-16. See www.IDTechEx.com/eh for details.
PrintForwardTweetLikePinredditShare
Previous
Next