2017 7월28일 Dr Khasha Ghaffarzadeh
Mobile robotics in material handling and logistics will become a $75bn market by 2027. It will then more than double by 2038. These staggering headline figures mask turbulent transformative change underneath: some technologies will rise and transform the fortunes of industries, fuelling growth rates far outpacing recent trends, whilst others will face with decay and obsolescence. We are at the beginning of the beginning of a transformative change, and the time to plan is now.
The IDTechEx Research report Mobile Robots & Drones in Material Handling & Logistics 2017-2037 focuses on all aspects of mobile robotics in material handling and logistics. In particular, we consider the following: automated guided vehicles and carts (AGVs and AGCs); autonomous mobile vehicles and carts/units; mobile picking robots; last mile delivery ground robots (droids) and drones; and autonomous trucks and light delivery vans (level 4 and level 5 automation).
We provide technology roadmaps and twenty-year market forecasts, in unit numbers and revenue, for all the technologies outlined above (11 forecast lines). We built a twenty-year model because our technology roadmap suggests that these changes will take place over long timescales. We further provide investment/trend analysis and company interviews/profiles/reviews.
Here, in this rest of this article, we will briefly highlight the major changes that our report anticipates. 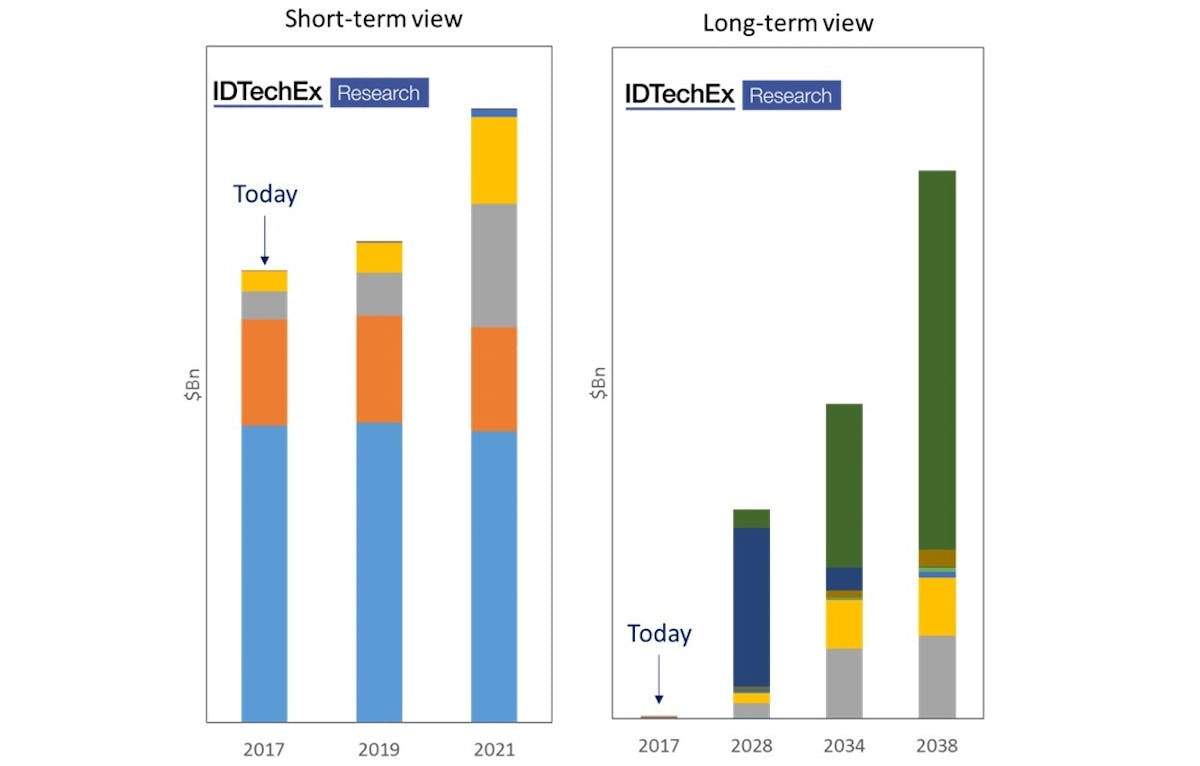 These figures show a short-term as well as a long-term view of the market evolution. Each colour refers to a different technology, demonstrating how the market composition will completely change in the coming years and how technology improvement (rise of autonomous mobile robots) will bring significant new revenue into the industries considered. We are at the beginning of the beginning of a transformative change, and the time to plan is now. This figure includes automated guided vehicles and carts (AGVs and AGCs); autonomous mobile vehicles and carts/units; mobile picking robots; last mile delivery ground robots (droids) and drones; and autonomous trucks and light delivery vans (level 4 and level 5). Note that the headline figure quoted above is at the level of complete autonomous vehicle. We also provide forecasts at the automation-only level where appropriate (e.g., autonomous trucks). For more information please refer to Mobile Robots & Drones in Material Handling & Logistics 2017-2037.

AGVs are a mature technology that can safely transport payloads ranging from several Kg to multiple tonnes, essentially acting as semi-rigid distributor conveyer belts covering large areas. Their navigation technology is evolving. Today multiple options are available ranging from the low-cost wire or magnetic tape guidance to the increasingly popular laser guidance. All however requires follow rigid guide points, thus requiring some degree of infrastructure modification and extended onsite installation. This industry is showing healthy, albeit small, grow rates.
This gives an illusion of security to this mature high-fragmented business where price competition is rise. The next generation navigation technology- infrastructure-independent flexible autonomy- has the potential to shatter this illusion. This new technology, whilst appearing just as the next natural step in navigation technology evolution, requires a wholescale change in the software side of the robots, giving an opportunity to new challengers to enter and to fully redraw the competitive landscape.
Our report Mobile Robots & Drones in Material Handling & Logistics 2017-2037 provides a detailed and quantitative (revenue and unit numbers) assessment, forecasting how sales of AGVs will grow then decline in the next twenty-years. In addition, it will show how autonomous mobile robots (AMRs) will rise, not just largely replacing AGVs but in time diffusing beyond the structured confines of warehouses and factories.

Forklifts will never be the same?

Navigational autonomy will induce a colossal transfer of value from wage bills paid for human-provided driving services towards spent on autonomous industrial vehicles. This, in turn, will fuel the growth in this material handling vehicle industry (e.g. forklift), creating significant revenues over a business-as-usual scenario. This is despite our technology roadmap showing that hardware commoditisation will slowly devalue such driving services particularly in high-wage regions.
AGVs barely made a dent in this industry. This is because their navigational rigidity put a low ceiling on their total market scope, keeping them as a small subset of the warehouse/factory automation business. Autonomous mobile robots are radically different however because they will ultimately enable automation to largely keep the flexibility and versatility of human-operated vehicles.
Our technology roadmap in the report- Mobile Robots & Drones in Material Handling & Logistics 2017-2037 - suggests that this change will not happen overnight, explaining why we have built twenty-year forecast models where each phase of market evolution is justified. They will, however, take place much earlier than mobile autonomy in general driving since the structured and controlled environment of indoor industrial facilities lends itself better to automation.
Indeed, our model suggests that autonomous forklifts, for example, will remain a tiny share of the global addressable market until around 2023 but will soon after enter the rapid growth phase, causing a transformation of the industry and dramatically raising adoption levels to as high as 70% by 2038.
This trend may not yet be on investor presentation of big, say, forklift suppliers, but will inevitable rise up the agenda as a key feature of the industry for years to come. Read Mobile Robots & Drones in Material Handling & Logistics 2017-2037 for more details.

Navigational autonomy will induce a colossal transfer of value from wage bills paid for human-provided driving services towards spent on autonomous industrial vehicles. This, in turn, will fuel the growth in this material handling vehicle industry (e.g., forklift), creating significant revenues over a business-as-usual scenario. This is despite our technology roadmap showing that hardware commoditisation will slowly devalue such driving services particularly in high-wage regions.
In our report Mobile Robots & Drones in Material Handling & Logistics 2017-2037 we provide a forecast model showing how mobile picking unit will evolve going through different phases of performance (sub-human, approaching human, and potentially exceeding human) over a twenty-year period for both regular and irregular/mixed shaped items. We provide forecast in unit sales as well as revenue. We further include company overviews/interviews as well as technology analysis.

Last mile delivery remains an expensive affair in the parcel delivery business, often representing more than half of the total cost. Its importance is also growing thanks to a change in the composition of total deliveries with B2C deliveries rapidly taking on a bigger share. E-commerce companies are also pushing next-day and now same-day services hoping to take away that last stronghold of bricks-and-mortar shops: instant customer fulfilment.
Autonomous mobile delivery robots are currently small slow-moving units that will need to return to base to charge. They often need close supervision and can only operate in sparsely-populated and highly-structured environments such as university campuses or special neighbourhood. They therefore are unproductive and easy to dismiss as gimmicks.
This is however only the beginning of the beginning. Our cost projections in the report suggest that these mobile robots can indeed become low-cost. The robots are now in the trial and learning phase, gathering more data and optimising the navigational algorithms. They will become increasingly more adept at path planning, even when GPS signals fail, and at object avoidance. The increased autonomous mobility capability will in turn enable a lower operator-to-fleet-size ratio, furthering boosting overall fleet productivity.
Our report Mobile Robots & Drones in Material Handling & Logistics 2017-2037} details a quantitative picture, in unit numbers as well as revenue, of the emergence of last mile delivery mobile robots over the coming two decades, clearly explaining the different phases of evolution from trial/early commercial sales toward rapid market penetration and finally towards maturity and then revenue decline (our model shows that hardware commoditization outpaces volume growth).

The idea of drone delivery sharply divides commentator opinion: some dismiss it as a mere publicity stunt whilst others consider it a game changer that will bring near instant product fulfilment to e-commerce, stripping traditional shops of their last major differentiator.
Drone delivery faces critical challenges. Individual drones offer limited productivity compared to traditional means of delivery. They can only carry small payloads and battery technology limits their flight duration, constraining them to around 30min radius of their base whilst further lowering their productivity due to the downtime needed for re-charging/re-loading. Safety is a potential showstopper with many accidents waiting to happen.
Drone delivery however is still in its infancy. Its short-term potential, we find, has been exaggerated. However, the technology has long-term future, particularly within the context of the bigger trend to automate as much as of the logistic chain as possible.
Indeed, we find that delivery drone sales will remain limited until 2027/28. Demand will then start to taking off in remote or sparsely-populated (e.g. suburbs), ultimately enabling companies to establish large accumulated fleets. Despite their ultimate rise, however, drone delivery will remain only a small part of the much bigger commercial drone story.

Trucking is a big business. In the US, the trucking industry revenues are in excess of $726bn. This is the equivalent of combined revenues of Apple, Amazon, Google, Microsoft, IBM, Baidu and then some (a lot) more. It is also a big employer: the US Bureau of Labour Statistics suggests that 1.79m people work in this sector driving trucks for inter-city freight transport earning an average salary of 41.3 k$/year. No wonder this is a hot topic now then.
Trucking is also potentially an easier target than general passenger cars. This is because it spends much of its time in intercity roads which are less congested and less sinuous than city ones. The driver may remain in the vehicle, but the commercial inventive, even in this hybrid approach, exists because it may justify a relaxation of the rulebook which limits driving hours. This can therefore boost driver productivity and asset utilization.
Our forecasts and technology roadmaps show how different levels of automation (level 4 and 5) will rise and fall in trucking over the next twenty years. Our forecast model has detailed projections for the future cost of automation hardware systems (Lidar, radar, IMU, GPS, PC, etc.) based on historical learning curves of similar technologies. Our forecasts are expressed in unit numbers as well as in value- both at the level of the truck itself and the automation part. We further provide reviews/profiles of industry players.
PrintForwardTweetLikePinredditShare
Previous
Next