2014年1月27日 Dr Peter Harrop
This article shares some of the research in the IDTechEx Research report Mobile Phone Indoor Positioning Systems (IPS) and Real Time Locating Systems (RTLS) 2014-2024.
Indoor positioning systems (IPS) is a term confined to indoor positioning presented on mobile/cell phones, or the like, to create added value services. For example, the derivatives of smart phones taking the form of glasses or eyepieces will have the ability to superimpose all manner of information across the items being viewed. For example, thanks to the work of US companies APX Labs, Vuzix and others, a service engineer might see "preventative maintenance due now" superimposed on their view of a machine in a factory. Position is known in 3D thanks to IPS often combined with real time locating systems (RTLS) by which second generation RFID tags are interrogated by several readers at a time to give location. That technology is usually different from IPS which seeks ubiquity before accuracy and therefore will use known location of Bluetooth and WiFi emitters and dead reckoning (inertial navigation) using the gyroscope, barometer and accelerometer in the typical smart phone. Linking RTLS and IPS gives powerful facilities that can revert to satellite navigation outdoors when the phone, smart glasses or whatever are outdoors. From consumers to emergency services and even surgeons, the uses will be many and varied. IDTechEx assesses that a $10 billion addressable market awaits.
Fig. 1. Survey of 74 case studies of RTLS by application. 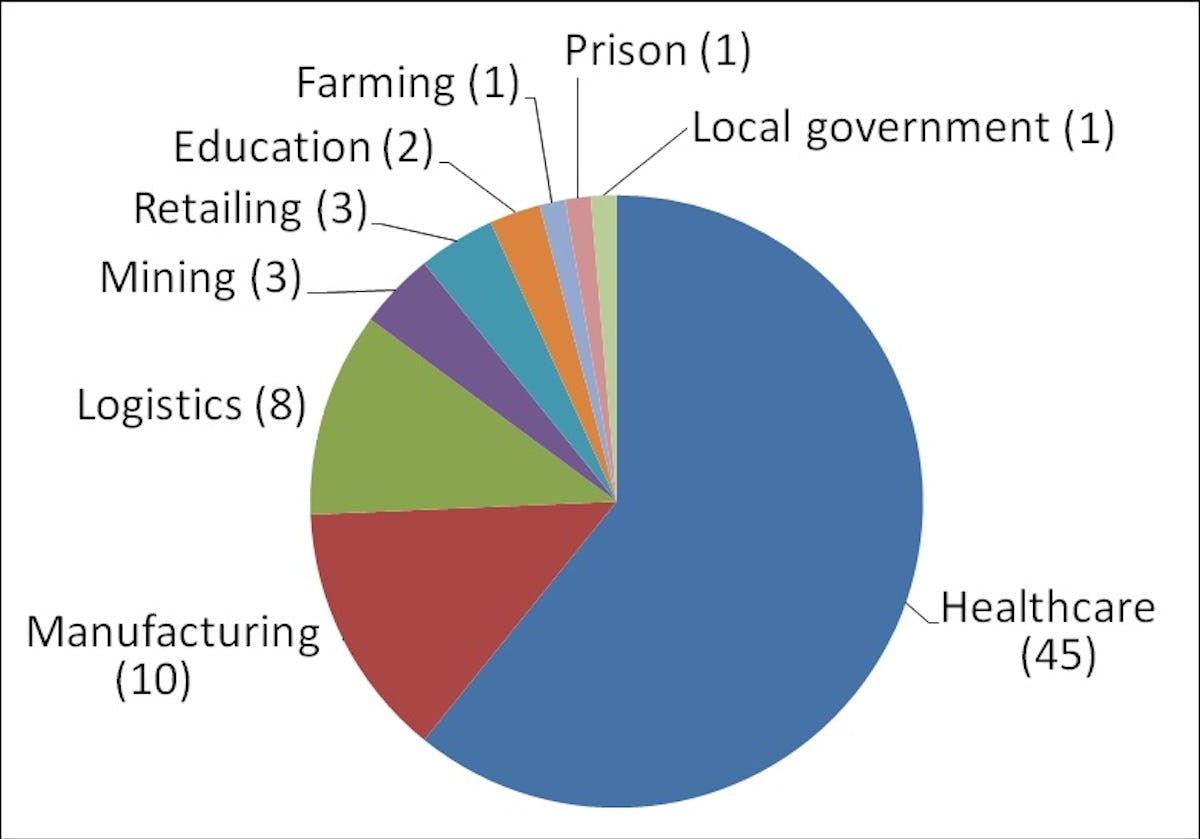 Source: IDTechEx report "Mobile Phone Indoor Positioning Systems (IPS) and Real Time Locating Systems (RTLS) 2014-2024" www.IDTechEx.com/ips
Whereas IPS is only now starting to be widely deployed commercially, Hewlett Packard is servicing an RTLS order for $543 million from the US veterans' hospital group with IBM the unsuccessful bidder. This order was 100 times the size of the previous record order for RTLS. Indeed, IDTechEx forecasts $4.8 billion in RTLS sales worldwide in 2024.
Rather different large companies are clashing over IPS, such as Apple, Microsoft Sony and Google because it will be a source of competitive advantage and of extra earning streams in the mobile phone and similar industries. They also foresee it in their planned smart watches. RTLS is even finding its way into wearable electronics having started with the ubiquitous pendants that track hospital staff and give their coordinates when they press the button for assistance. Cadi Scientific of Singapore and Harmonic Group of South Africa are new RTLS suppliers alongside US companies RF Technologies, Zebra Technologies and other incumbents.
Axcess International, a leading RFID/ RTLS system supplier puts it this way:
"Across the globe and among many industries active RFID/RTLS technology has evolved far beyond the days of barcodes in retail. Lives are being saved, businesses are innovating at the speed of light, and automation of everything has become the de facto standard. RFID/RTLS technology and sensor networks are delivering critical data in multiple types of environments far beyond the enclosed, wired limitations of yesterday.
U.S. businesses absorb $40 billion per year in lost productivity and increased costs because crucial process and environmental data is not effectively captured and analyzed. Fortunately, that is changing. With the innovation of RFID/RTLS technology and wireless sensing capabilities, you can automatically relay real-time information that was previously unattainable and use it to improve efficiencies, maximize security, and minimize risk."
In its 267 pages the unique IDTechEx report Mobile Phone Indoor Positioning Systems (IPS) and Real Time Locating Systems (RTLS) 2014-2024 analyses and forecasts all this in 72 tables and figures.
PrintForwardTweetLikePinredditShare
Previous
Next