2017年9月5日 Dr Khasha Ghaffarzadeh
Robots are becoming uncaged, mobile, collaborative and increasingly intelligent and dexterous, moving beyond their traditional strongholds to bring automation to previously inaccessible tasks. Agriculture is also no exception and is being quietly transformed by this rising new robotics.
In this article, we will consider the evolution and the long-term impact of autonomous mobility in farm vehicles. In our report "Agricultural Robots and Drones 2017-2027: Technologies, Markets, Players", we provide more details on how progress and innovation in robotics is changing agriculture. There, we provide granular ten-year segmented market forecasts for 14 categories; assess all the key technological components; and include more than 20 interview-based full company profiles with detailed SWOT analysis. Also included are 40 company profiles without SWOT analysis and summarized coverage of the works of more than 80 companies/research groups.
Evolution towards full navigational autonomy
Agriculture is the leading adopter of autonomous driving technology despite all the hype around driverless cars. Real time kinematic GPS (RTK-GPS) forms the backbone of this outdoor navigational technology with its centimetre level positional accuracy. Here, first came tractor guidance, helping drivers drive more accurately and relieving some of the pressure of maintaining driving accuracy. Next came autosteer, giving the operator the ability to programme a map into the tractor and let it navigate autonomously.
In agriculture, more than 210k RTK GPS receivers were sold last year. We project that this number will rise to 335 thousand by 2023. Autosteer will be the fast growing use case whilst other cases such as variable rate equipment will also see accelerated growth. This trend will be boosted as receiver prices continue to fall. The receiver technology is becoming increasingly commoditized. The uptake will also be helped by increased uptake in precision agriculture practices. The full ecosystem is finally coming together with more reliable variable rate equipment such as seeders and sprayers. We project that some 330 thousand VRT equipment will be sold in 2023, up from a mere 40 k or so in 2015.
Technology is now evolving towards full autonomy. Master-and-slave (or follow-me) systems are being trialled, enabling one driver to guide a fleet, thus boosting the driver's productivity. Next will come manned yet fully autonomous tractors (level 5). This has already been technologically demonstrated. Here, the vehicle's sensing suite has to be expanded to enable it to avoid collision and operate even when the GPS signal is lost.
The next stage will potentially be unmanned autonomous tractors. In fact, this year, we saw the first public demonstrators for such vehicles. Currently, however, the farmers want to stay in charge, thus the cab is likely to be kept in the design. In the long term, however, the meaning of staying in charge will change, transiting from driving the vehicle to, for example, remote fleet operation/management.
In general, agriculture is well suited to autonomous mobility: farms are semi-structured, sparsely-populated environments and are thus simpler to autonomize than general driving on congested roads. There is also commercial incentive: reducing the wage bill. The challenge however, is to convince the farmers to pay for the technology and to adopt it. Indeed, farmer conservatism and the general characteristic of the agriculture market will turn this potentially revolutionary technology into an evolution.

Technology evolution towards full unmanned navigational autonomy.
What happens when we take the driver out of the equation?
Taking the driver out of the equation can have profound consequences for the way we envisage agricultural machinery. The well-established notion that bigger is better has its origins in the need to enhance the productivity of the driver but this notion loses some of its relevance if farm vehicles become autonomous and unmanned.
The navigational autonomy can, therefore, initiate a major transition from large, heavy, fast and expensive vehicles towards fleets of agricultural robots. These agrobots would move slowly, giving extra attention to plants; and they would be light weight, eliminating soil compaction. They would also have to be inexpensive in order to compensate for their lower individual productivity through fleet operation.
Many small robots have been developed at the research level and a few have been commercially launched and sold. The machine designs are not the done deal yet. In fact, there is still some way to go: these robots often only work on highly structured farms and on crops with limited height; they take action using mechanical means which can be slow otherwise they will need to carry tanks of water and chemicals which adds to size and weight; the cost of data capture is relatively high compared to other methods such as drones given their high unit current unit costs and slow pace; and so on.
We are however only at the beginning of the beginning of here. Indeed, the rise of small mobile robots is not limited to just agricultural machinery. Take, for example, vehicles used in material handling. Here, small robots are being commercially developed to carry loads inside facilities. These mobile robots can autonomously navigate with no reliance on guiding infrastructure (e.g., magnetic tapes). These mobile robots will become increasingly able and authorized to share spaces with humans, intelligently navigating their way and avoiding objects. They will therefore enter new spaces to ferry items around, diffusing from highly controlled and structured environments towards increasingly less structured ones. This is considered more in our report "Mobile Robots and Drones in Material Handling and Logistics 2017-2037". 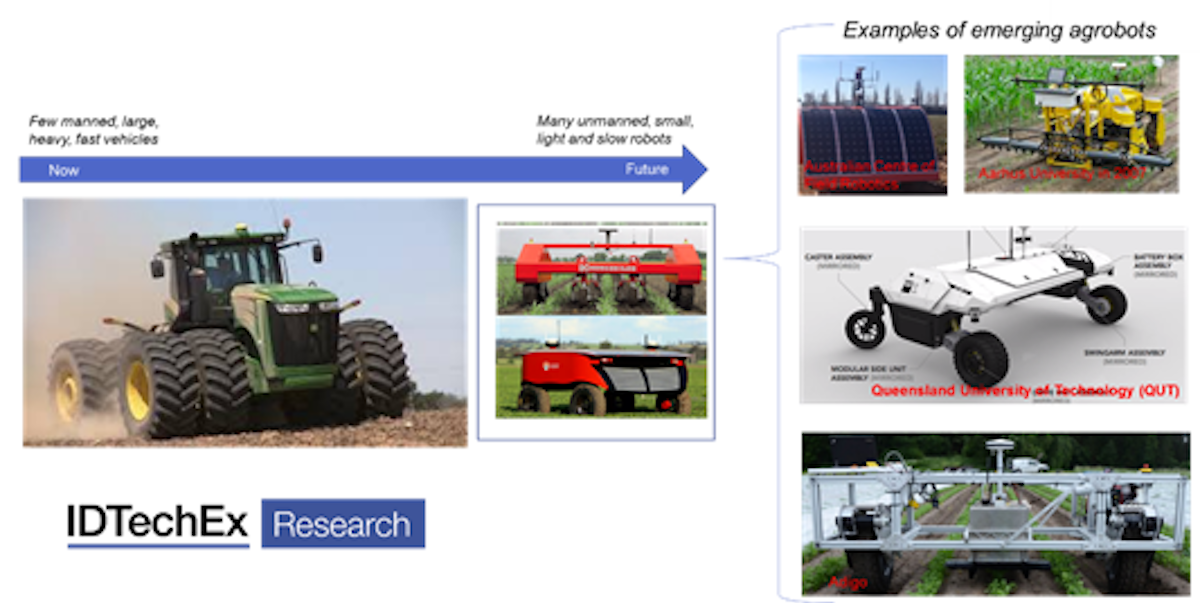 The battle between the big and the small in the design of farm vehicles. Can a major change take place with the rise of autonomous unmanned mobility?
PrintForwardTweetLikePinredditShare
Previous
Next