2020年3月25日 Dr Michael Dent
Plastic pollution is rapidly becoming one of the world's biggest environmental issues as increasing production of single use plastic products far outweighs the world's ability to deal with them. This is particularly visible in African and Asian nations, where trash collection infrastructure is often lacking, although Europe and North America also struggle to collect discarded plastics and recycling rates remain troublingly low. Most plastics are currently made from petrochemical feedstocks, furthering the world's dependency on crude oil. Despite growing awareness around the problems of plastics, global plastics production is growing, with the recent IDTechEx report, "Bioplastics 2020-2025", forecasting it to pass 600 million tonnes by 2030. 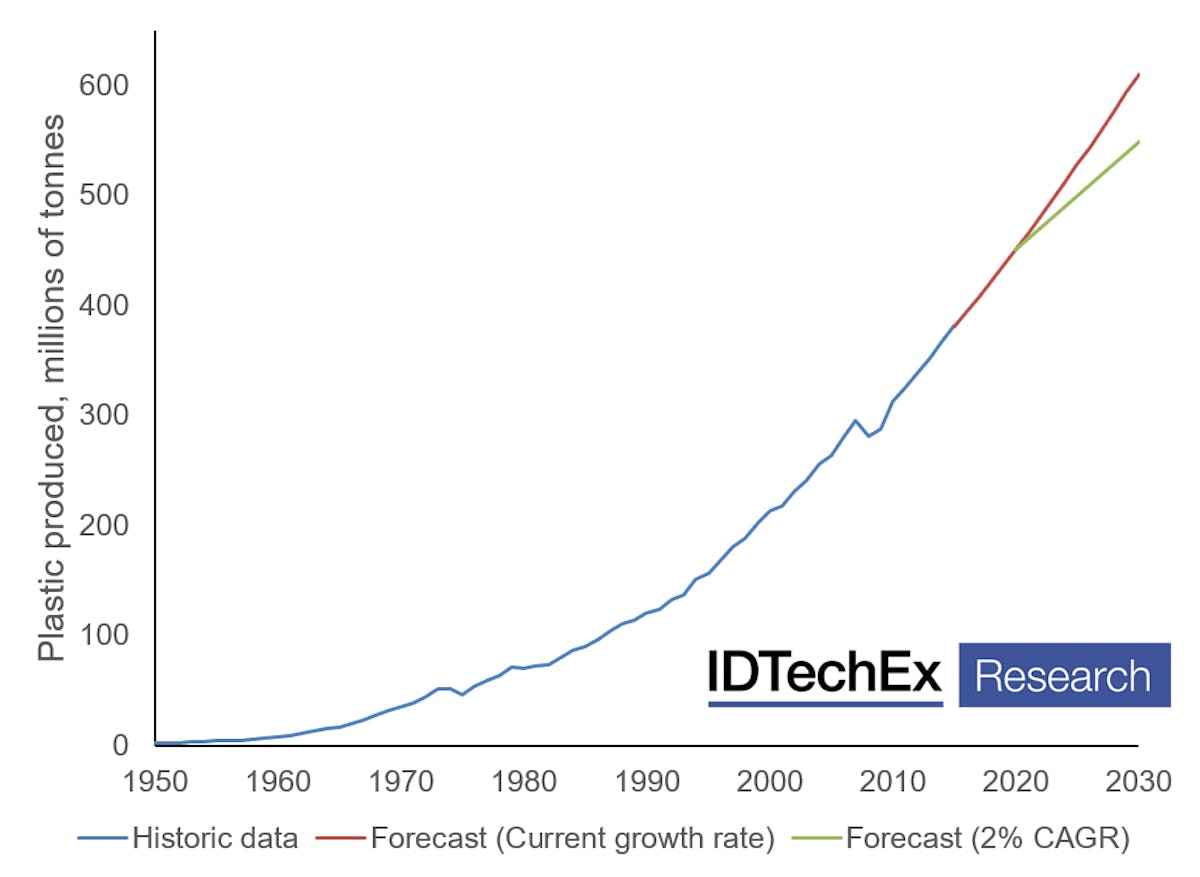 Global plastic production will reach 600 million tonnes by 2030, if no measures are taken to reduce demand (red). Source: IDTechEx Report Bioplastics 2020-2025.
A potential solution to world's plastic problem is the growing bioplastics industry. Bioplastics are a family of polymers derived from a biomass feedstock. There are a wide range of available bioplastics, from direct substitutions to existing fossil-based plastics ("drop-in" bioplastics) to new plastics produced through innovative methods, such as polyhydroxyalkanoates, bioplastics produced by microorganisms. Although only about half of the bioplastics produced globally are biodegradable, they are renewably sourced and there is an industry drive to improve the mechanical properties and reduce production costs for biodegradable bioplastics.
However, despite the environmental benefits, the bioplastics industry is yet to take off and the sector is littered with bankruptcies. Bioplastics are often significantly more expensive than their petrochemical counterparts, something consumers and businesses aren't willing to pay for. The situation was exacerbated by the 2014 oil price crash, which widened the gap between fossil-based plastics and bioplastics. Former rising stars like Bio-On and BioAmber have recently declared bankruptcy, while Metabolix abandoned attempts to commercialise polyhydroxyalkanoates after spending hundreds of millions of dollars on the efforts, rebranding itself as an agritech company.

The fall in oil prices made bioplastics less competitive with petrochemical plastics, causing bankruptcies. Source: IDTechEx Report Bioplastics 2020-2025.
But the situation is beginning to change. Recent technological are making biobased polymers cheaper than ever to produce at scale. Californian start-up Newlight Technologies claims that its AirCarbon brand bioplastic, produced by ocean bacteria from waste gases from the dairy industry, is cheaper to produce than conventional plastics. And in 2019, Anellotech claimed it had achieved commercially-targeted yields of its wood-derived terephthalic acid, a precursor to some of the world's major plastics. The next five years could be a pivotal period for the bioplastics industry and the new IDTechEx report, Bioplastics 2020-2025, provides an in-depth review of the range of available bioplastics, evaluating the benefits and challenges in production and providing an outlook for the industry.
PrintForwardTweetLikePinredditShare
Previous
Next

Artificial Intelligence in Drug Discovery and How it is Applied
Antimicrobial Technologies: New materials to meet new demand
その他の