2011年8月4日 Raghu Das
In 2011, IDTechEx research finds that the amount of money spent on energy harvesters will be $0.7Bn, with several hundred developers involved throughout the value chain. Energy harvesting is the process by which ambient energy is captured and converted into electricity for small autonomous devices, such as satellites, laptops and nodes in sensor networks making them self-sufficient. Energy harvesting applications reach from vehicles to the smart grid.
The majority of the value this year is in consumer electronic applications, where energy harvesters have been used for some time. In 2011, 1.6 million energy harvesters will be used in wireless sensors, resulting in $13.75 million being spent on those harvesters. The full breakdown is shown below. 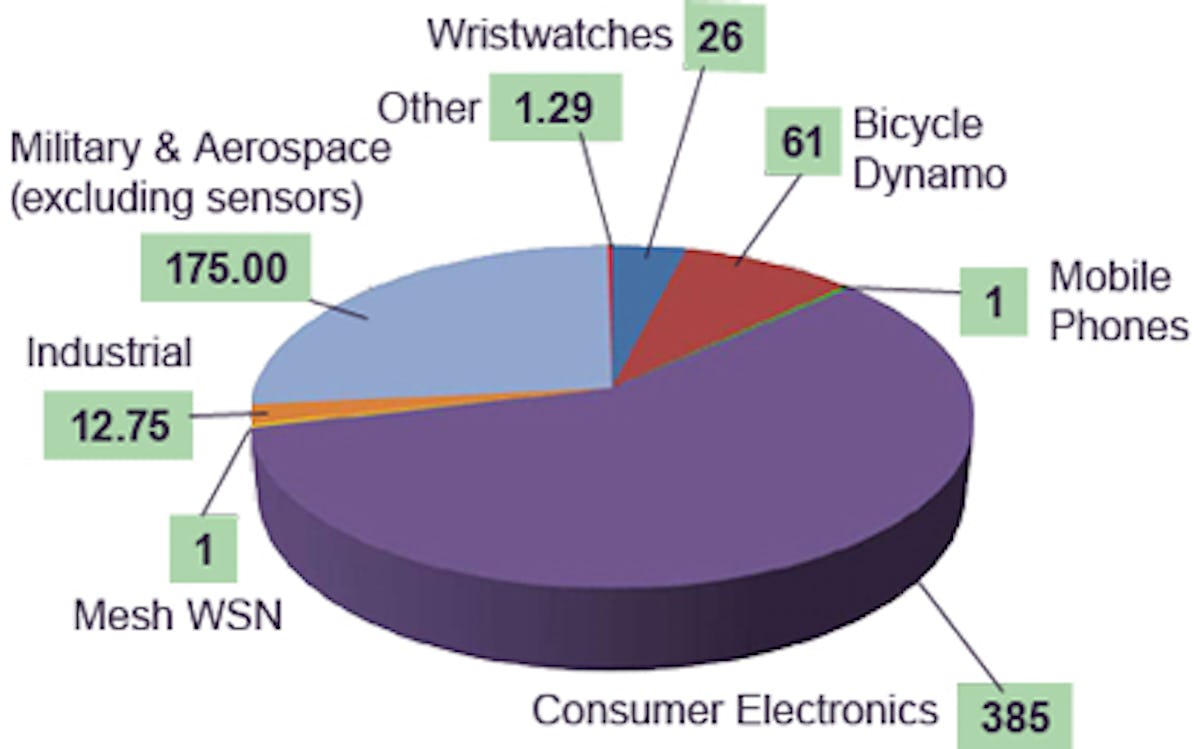 This year, most of the harvesters used in the above market segments are solar cells followed by electrodynamos, two relatively mature energy harvesting technologies. However, many new technologies are now taking some market share enabling power in areas not possible before. This includes thermoelectrics - generating power from heat - where organisations such as the Department of Energy in the US are working with BMW and GM to turn heat waste from engines and exhaust into power for the vehicle's electrical systems. NASA use thermoelectrics to power Mars rovers where they work without light, unlike solar cells. Piezoelectric energy harvesters are also of great interest due to their small form factor and high efficiency. In 2021, these four energy harvester types will have near similar market share for industrial sensing applications. However, even by then solar will continue to dominate for consumer applications.

Challenges in the value chain

In addition to the energy harvesting component, there are those developing energy storage, interfacing electronics and low power electronics. There is no one-size-fits-all solution - even similar energy harvesters are rarely "broadband" - they are tuned to the requirement of the actual application, such as the heat gradient available or the frequency of motion. Like most industries at this stage, there is exciting enabling technology but many component suppliers sell horizontally when users want solutions, not components. The opportunity is there for the taking. 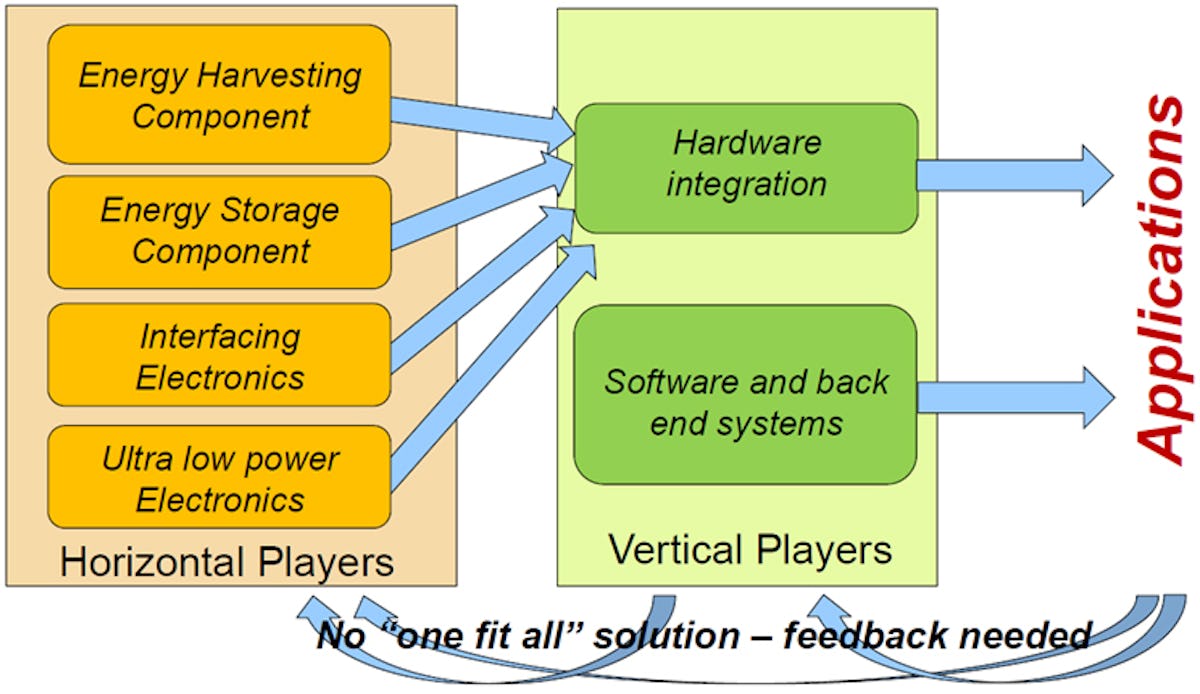 In recent years the thrust of focus for those developing energy harvesters is powering wireless sensors. Energy harvester powered wireless sensors are now available, but there is some delay in adoption of wireless sensors which is outside the control of the energy harvesting community, which is the lack of standards - too many are pushing proprietary wireless standards and users are unwilling to commit to large numbers as a result. Still too many sell hardware and not full solutions which should include the software (do they expect users to write their own software?). Governments are moving rapidly, and could mandate the use of energy harvesting as they have with smart meters, RFID, PV etc. For example, new legislation in the UK requires carbon monoxide sensors in every classroom. In the US, the government want automatic tyre pressure monitoring. Conventional batteries will fail at low temperatures - several are now offering energy harvesting powered solutions. All of these trends, including extremely detailed ten year forecasts, are covered in the IDTechEx report Energy Harvesting & Storage for Electronic Devices 2011-2021.
The topic has also expanded into replacing grid energy locally. Several companies have developed paving tiles that generate energy when stood on, which could be used to power or supplement the power to street lighting, for instance. In addition, the new range of form factors are incredibly exciting. For example, at the IDTechEx Energy Harvesting & Storage event in Boston, USA November 15-16, Princeton University will discuss flexible ribbon energy harvesters and MC10 will talk about stretchable electronics. These new technologies will create new markets, electronic apparel sportswear being one target.

This will all galvanise into a market of $4.4 Billion ten years from now - that is the money spent on the energy harvesting component alone. That includes 250 million sensors powered by an energy harvester (at an average price of $6 per harvester), and by then numerous consumer electronics devices including laptops, ebooks and cell phones.
For more information attend the world's largest event on the topic in Boston on November 15-16. See www.IDTechEx.com/Boston for details. It explores the applications with many end users presenting their needs and experiences and it covers all the technologies.
For more information on Energy Harvesting and Storage for Electronic Devices 2011-2021 the IDTechEx report please contact Raoul Escobar-Franco on raoul@IDTechEx.com or call +1 617 577 7890 (USA)
For more information on attending, exhibiting or sponsoring the Energy Harvesting & Storage and Wireless Networks & RTLS USA, November 15-16 2011, Boston USA contact Ricky Purnell on r.purnell@IDTechEx.com or call +44 (0)1273 777134 (UK)
PrintForwardTweetLikePinredditShare
Previous
Next