Energy Storage in 2021: Challenges and Opportunities

Energy Storage in 2021: Challenges and Opportunities

Demand for Li-ion batteries is forecast to undergo rapid growth over the next 10 years, driven primarily by the electrification of transport. This will involve growth in demand for battery-electric cars, but also for a wide spectrum of vehicle types and segments, and it is these non-car segments that many pack manufacturers will be targeting. IDTechEx's report "Lithium-ion Batteries for Electric Vehicles 2021-2031" covers the trends in battery technology for EVs and studies the pack manufacturers targeting buses, commercial vehicles, and many other non-car segments. However, while Li-ion will continue to remain the dominant technology in electric vehicles, the fears of potential bottlenecks to the supply of certain critical materials, such as lithium, nickel, or graphite, may ultimately limit the rate of EV uptake. IDTechEx's report "Materials for Electric Vehicle Battery Cells and Packs 2021-2031" forecasts the growth in demand for Li-ion battery materials included in the cell and pack, while IDTechEx also covers the wider Li-ion market, including detailed analysis of the technology and players. Beyond the problems that may be caused by the rapid growth in material demand, concerns also exist over the environmental impact and sustainability of Li-ion production.

Recycling offers a partial solution to both the sustainability and supply chain issues faced by the Li-ion industry by providing a degree of circularity - materials from waste and end-of-life batteries can be extracted and refined to be re-used in cell and battery manufacturing. This can have several beneficial impacts. It can diversify material supplies, helping to reduce reliance on any single country or region. Environmentally, Li-ion recycling, especially via hydrometallurgical or direct recycling routes, is expected to reduce the total energy requirements of producing a cell, compared to using virgin materials. Other emissions, including SOx, NOx, and particulates, in addition to CO2, are also expected to be lower by using recycled material over primary extraction. Local recycling and refining capabilities, as are beginning to be built up in Europe and the US, can also reduce the distance traveled by materials further reducing the emissions profile of Li-ion batteries. However, even if enough recycling capacity was built up to deal with the entire volume of waste Li-ion batteries by 2030, recycled material could only contribute a fraction of the material demand.

Without recycling, valuable critical metals will go to landfill creating both waste and safety hazards. Source: IDTechEx
To help alleviate possible supply chain constraints, a number of alternative battery and energy storage technologies are under development that may be able to replace Li-ion batteries in applications where energy density is not such a critical parameter. The applications for these technologies could include small, city-dwelling electric cars, e-buses, hybrid electric vehicles, fuel-cell trucks, or autonomous guided vehicles, all of which are covered by IDTechEx's portfolio of EV research. But the array of energy storage technologies available and underdevelopment is most obvious in the stationary energy storage sector. This is true because energy density becomes a less critical factor in stationary energy storage, allowing a range of technologies to be utilized.
To find out more on the stationary storage markets and electric vehicle markets, please see the reports "Batteries for Stationary Energy Storage 2021-2031" and "Electric Vehicles: Land, Sea and Air 2021-2041". More detailed analysis of individual EV segments can be found in specific reports on electric buses, cars, 2-wheelers, commercial vehicles, and boats, amongst others. 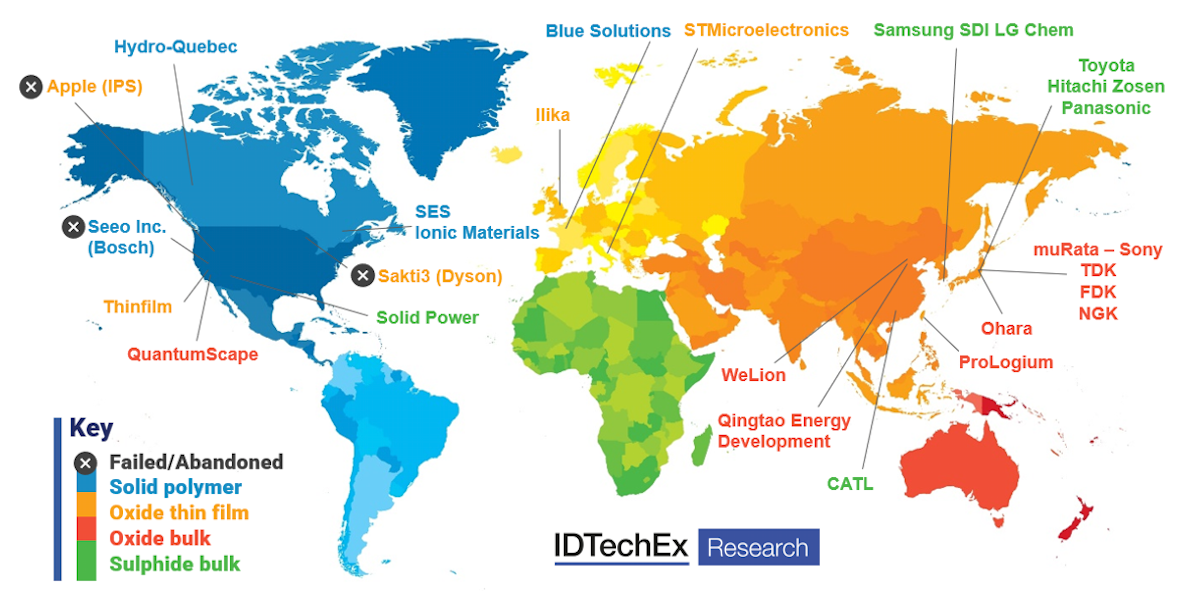 Na-ion has seen renewed interest after CATL's announcement of their development of Na-ion. Similar in many ways to Li-ion batteries, Na-ion batteries utilize Na as the working element instead of Li, as the name would suggest. Na-ion batteries are generally characterized by having slightly higher powers and cycle lives than NMC and LFP Li-ion cells, but with slightly lower gravimetric energy densities. While Na-ion will of course reduce reliance on lithium, their cathodes can still make use of cobalt and nickel, and so whether they can be utilized to reduce reliance on these materials depends entirely on the specific cathode chemistries that will be used.
For greater insight into the technological capabilities of different battery forms, please see Advanced Li-ion batteries.

Redox flow batteries differ from intercalation batteries such as Li-ion and Na-ion, by storing energy in the electrolyte, separate to the electrochemical cell, thus allowing the de-coupling of energy power. This key aspect makes RFBs well suited to stationary storage applications, especially long-duration applications. Vanadium is by far the most widely deployed chemistry, with 15-20 companies commercializing vanadium systems. However, the high cost of vanadium leads to high capital costs that may be prohibitive to widespread use, though schemes such as electrolyte leasing are being explored to try and reduce the initial capital expenditure. Nevertheless, the high cost of vanadium has led to the development of alternative RFB chemistries that utilize low-cost active materials, such as the all-iron-based chemistry being developed by ESS Inc or even flow batteries that can utilize low-cost, widely available organic compounds as the electrolyte active material. 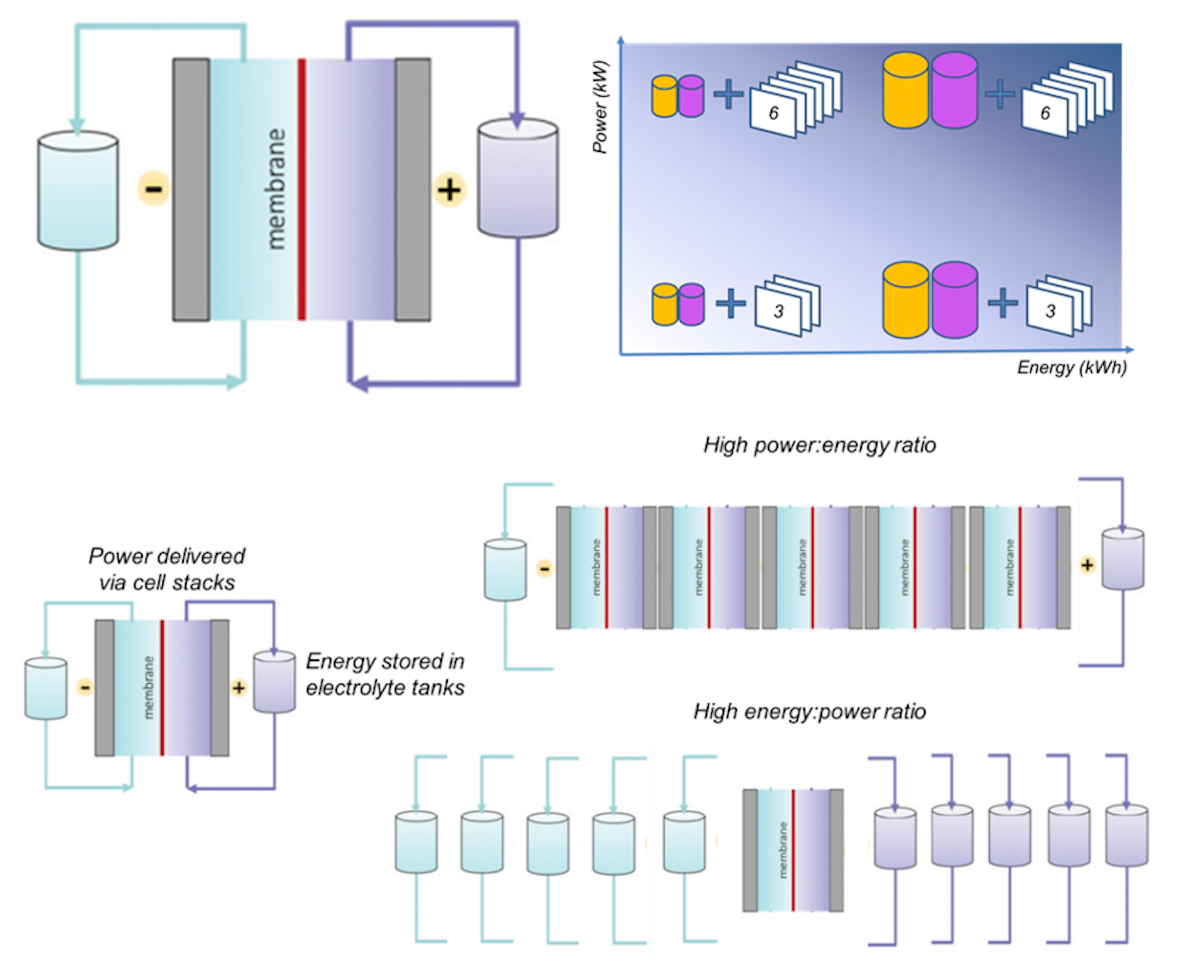 Non-electrochemical technologies such as gravitational storage or cryogenic air storage are also being explored, but they are at an early stage of development and may not be suitable for economic storage over longer timeframes. Balancing of supply and demand for grids utilizing high percentages of variable renewables will require a combination of energy storage, overcapacity, interconnection, and other solutions such as vehicle-to-grid capability and demand-side response. Indeed, a variety of non-electrochemical storage technologies, from supercapacitors to compressed air energy storage are being explored for stationary applications.
Green hydrogen is also discussed as a potential solution for long-duration energy storage and continues to receive government support. Electrolyzers, whether PEM, alkaline or solid-oxide type, can be used to produce hydrogen from water to be stored for use at a later time. Whether long-term storage of hydrogen will become feasible remains to be seen. Storage in gas cylinders may be too costly, while underground storage in aquifers or salt caverns for example has geographic constraints and remains relatively untested. An alternative H2 storage method being explored consists of injecting H2 into existing natural gas pipelines where there is an inherent energy storage capacity, though there will be limits to the amount of hydrogen that can enter current gas networks. Beyond this, electrolytic hydrogen will be necessary to green various industries such as ammonia, steel, or chemicals production. The use of hydrogen for energy consumption, where there are alternative solutions, may not be the optimal choice. Instead, it is demand from industrial sectors which IDTechEx expect to drive demand for electrolyzers and green hydrogen. 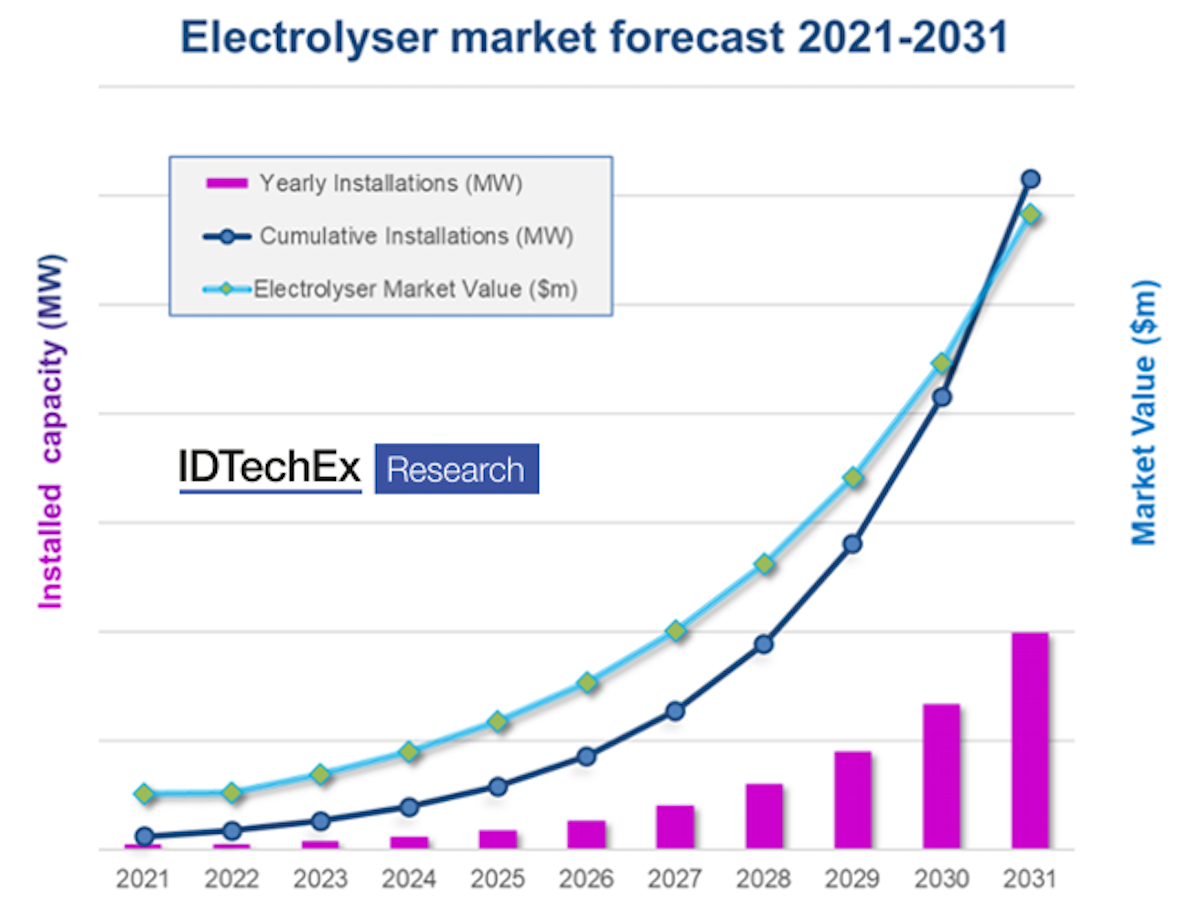 Growth expected in demand for electrolyzers. Source: IDTechEx
To find out more on the wide array of battery and energy storage technologies being developed, please visit www.IDTechEx.com/EnergyStorage.
IDTechEx guides your strategic business decisions through its Research, Subscription and Consultancy products, helping you profit from emerging technologies. For more information, contact research@IDTechEx.com or visit www.IDTechEx.com.
PrintForwardTweetLikePinredditShare
Previous
Next