2012年8月20日 Dr Harry Zervos
As more and more flexible devices are becoming available, the need for better performing barriers and encapsulation materials at lower cost points intensifies. The stringent requirements make this a difficult task for some applications, although others, with less intensive demands are already appearing in the market. Examples include flexible electrophoretic displays (e-paper) currently being commercialized as e-book readers, smart labels, etc. IDTechEx forecasts a $1 Billion opportunity for the market for encapsulation materials for a variety of applications, with details on the market and the way it's going to develop in the "Barrier Films for Flexible Electronics 2012-2022" report.
Flexible displays and photovoltaics and their barrier layer needs
According to IDTechEx, in 2012 6% of printed electronics will be conformal or flexible (mainly due to the huge rise in the adoption of OLED on glass for smart phones and tablet applications) while the rest will remain rigid (usually being that they are on a rigid glass substrate). In 2022 the amount that is conformal/flexible rises to 32% of the total value.
Supporting that increasing trend are interviews with companies like 3M, who are describing their efforts in making flexible barriers available at price points that are comparable to that of optical glass, increasing competitiveness as well as offering unique selling points such as lighter weight and increased robustness. Nokia, presenting at IDTechEx Printed Electronics events, has shown roadmaps to move to OLED displays in their cell phones - when they are available on plastic substrates. Samsung has already moved on to OLED displays even though they are still on glass and they tend to be quite fragile. In these cases and in others such as laptops or e-readers for children or educational purposes, the companies do not need flexible or rollable displays but they do benefit from the added robustness that flexible substrates offer.
These trends lead to an overall market forecast by IDTechEx of $200 million dollars by 2022 for the display market alone, as described in the report "Barrier Films for Flexible Electronics 2012-2022". In OLED displays in specific, almost 2.5 million square meters of barrier material will be utilised in the making of more robust and in some cases flexible displays.
Area of flexible barriers forecasted for utilization in OLED displays 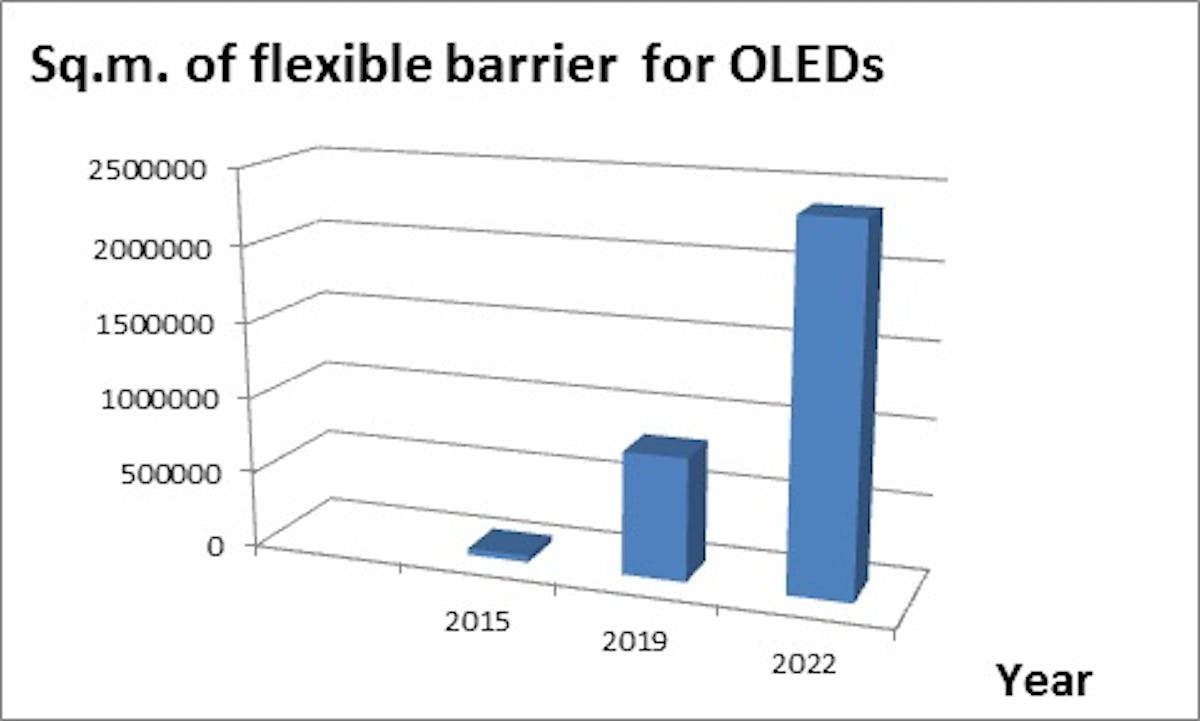 Source: IDTechEx
"Barrier Films for Flexible Electronics 2012-2022"
Flexible barriers in photovoltaics applications
The trend of flexible/conformal devices claiming a part of the now mature glass-based market is also appearing in the photovoltaics sector. Although the more established technologies, such as crystalline silicon and CdTe will always remain glass based and will continue to cater for the largest amount of rooftop and solar farm installations, in some cases, specific requirements will lead to further adoption of flexibly encapsulated solar cells.
Light weight requirements for example, integration into portable devices or conformal deposition of solar cells would make an ideal case for solar cells that are not glass-based.
The growth in this sector is not as fast as initially forecasted a few years ago, and that's mainly relating to the slower than expected development of 3rd generation technologies (organic photovoltaics and dye sensitized solar cells) and some difficulties in their commercialization. Limitations in these technologies' lifetime and efficiency are making it harder for them to compete with other thin films that can also be flexible and lightweight (CIGS or a-Si for example) but these issues are hopefully going to be resolved in the next few years.
Encapsulation materials going into the photovoltaics sector are going to be forming another large segment of the overall barrier layer market. IDTechEx forecasts a $380 million market by 2022 for barriers for inorganic photovoltaic technologies such as CIGS and amorphous silicon. This would correspond to a total area of barrier materials in excess of 12 million sq.m. by 2022.
For more attend the forthcoming events:
Printed Electronics Asia, Japan, Oct 2-3 2012
Printed Electronics USA, CA, USA, Dec 5-6 2012
Printed Electronics Europe, Berlin, Germany, April 17-18 2013
PrintForwardTweetLikePinredditShare
Previous
Next