Oct 26, 2017 Dr Khasha Ghaffarzadeh
The idea of drone delivery sharply divides commentator opinion: some dismiss it as a mere publicity stunt whilst others consider it a game changer that will bring near instant product fulfilment to e-commerce, stripping traditional shops of their last major differentiator.
In our report "Mobile Robots and Drones in Material Handling and Logistics 2017-2037", we have analysed the technologies that are emerging in the last mile delivery space including drones and autonomous mobile ground robots (or droids). We provide a quantitative picture of the market evolution, in unit numbers and revenues, over a twenty-year period (2017-2037). We do this for all aspects of mobile robotics in material handling and logistics also including autonomous trucks and light vans, autonomous mobile material handling carts and vehicles (e.g., forklifts), AGVs and AGCs, mobile picking robots. We provide technology assessments, detailed twenty-year market forecasts, and company overviews/profiles.
Here in this article, we paint a big picture of how we see the emergence of drone delivery. For details refer to the report "Mobile Robots and Drones in Material Handling and Logistics 2017-2037".
Drone industry is changing character
Drone delivery must be first viewed within the context of the emerging drone industry. This industry has rapidly grown with the market leader's income reaching $1.5bn per year. The industry is now led not just by Made-in-China but also by Designed-in-China.
The market is, however, in the midst of changing its character. The consumer drones' hardware platform has become rapidly commoditized with prices falling, according to our data, exceeding 60% in the past two years or so. The growth in unit sales is yet to catch up, causing many to feel the pain and laying off staff en mass. Investment levels are also showing signs of slowing down (see below), prompting concerns about a potential crash after the hype. 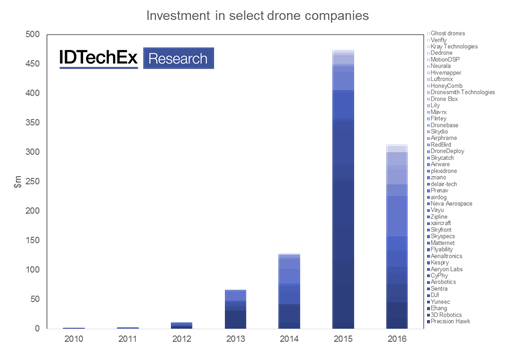 Accumulative investment in drone firms as a function time. Investment rose nearly 50 fold between 2012 and 2016, exceeding $450m in 2015. Investment peaked in 2015 as industry moved past hype and as the platforms commoditized. New opportunities beyond platforms are now sought in specialised software, hardware components such as sensors and drone services.
The new prevalent strategy is to pivot towards commercial drones. The drones will be higher performance and potentially application-customized, leading to higher prices. This will hold true in the medium-term but there will be no escaping the ultimate fate: hardware platform commoditization. The rise of prosumer drones- with prices already pinned down close to the consumer end- attests to this.
The lasting source for value however is likely to be found (a) in specialized vertical (or application) focused software (apps) providing a higher value service, or (b) in specialized hardware components such as sensors or batteries. Indeed, the value of drone-enabled services will only grow as the installed base of drones expands, creating an infrastructure that will support large-scale service deployment. This is not much different to the rise of mobile phone apps that followed the large user base.
Drone delivery is also part of the same trend: pivot towards specialized hardware platforms enabling a new commercial service.
The idea of drone delivery entered mainstream media in late 2013. Around that time, drone delivery of e-commerce parcels were first demonstrated whilst, in parallel, drones successfully delivered medicine to remote areas. Since then numerous deliveries have been made, partnerships announced, and substantial sums invested (see as example Matternet and Zipline raising a total of $12.95m and $41m, respectively). Despite these, the industry is still in its infancy.
For more information on the drone market please see"Mobile Robots and Drones in Material Handling and Logistics 2017-2037".
Fleet operation to compensate for poor individual drone productivity?
Drone delivery faces critical challenges. Individual drones offer limited productivity compared to traditional means of delivery (e.g., consider a van delivering cir. 150 parcels in an 8-hour shift). They can only carry small payloads and battery technology limits their flight duration, constraining them to around 30min radius of their base whilst further lowering their productivity due to the downtime needed for re-charging/re-loading.
The limited productivity, in our view, is not a showstopper. This is because fleet operation will compensate for poor individual drone productivity. The unit cost of drones will be substantially lower than, say, a van, enabling the conversation of a few, highly-productive vehicles into many small drones with high productivity at the fleet level. This will require a further major reduction in hardware costs for commercial drones, but if the past is to be our guide, this will be inevitable, as explained above.
As a general point, autonomous mobile robotic technology is causing a paradigm shift in the way we envisage many commercial vehicles. Take an unrelated example: tractors in agriculture. Here, the traditional design objective has been to make the tractor bigger and faster to amplify the productivity of the driver. Autonomous mobility can upend this by converting a few, fast, heavy tractors into a fleet of many slow, small driverless agrobots. This process has begun and drone delivery can be viewed as part of this same long-term trend.
Limited payload is also not a showstopper because, according to Amazon statistics, some 85% of packages weigh below 5pounds. Furthermore, the fall in delivery costs and time for customers is changing purchasing habits: frequent orders of small items is replacing that big infrequent order. This matches well to the strong points of drones.
The limited range is also not a showstopper even in suburban areas where customers do not live close to a distribution point. It will, however, mandate a gradual yet wholesale change in the location of warehouses with more placed closer to end customers or the use of large mobile drone carrier vans. The former is already happening in the background, whilst the latter has also been demonstrated at the proof-of-concept level. 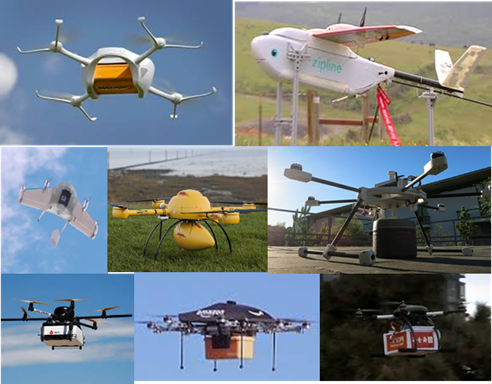 Photos of select delivery drones. First row, left to right: Matternet, Zipline; Second row: Google, DHL, Connect Robotics; Third row: Flirtey, Amazon, Alibaba
Will safety concerns stop the show?
The most critical challenge is safety. This can indeed be a showstopper and will almost certainly limit the market scope to sparsely populated areas. Regulatory framework is already being relaxed for commercial drones, but it still rightly continues to put brakes on large-scale deployment of beyond-line-of-sight commercial drones. Indeed, there are many accidents waiting to happen: mechanical failure causing crash, software failure leading to early release of payloads, etc.
Safety concerns will be a major damping factor. Together with technology limitations they will limit the market scope. Indeed, our market roadmap suggests that drones will initially be constrained only to deliveries to remote areas. Technology evolution will enable them to next diffuse towards deliveries of urgent vital items, and then towards places with low sprawled-out population densities. High-density apartment-ized urban environments will remain largely out-of-reach.
Our forecast model and technology roadmaps show that delivery drone sales will remain limited to a few hundreds of unit sales per year between now and 2027/28. Demand will then start to take off, reaching sales volumes exceeding fifty thousand unit per year by 2038. Thanks to accumulation effects, we therefore expect to see major drone delivery fleets in operation within our twenty-year forecast period. For details about our forecasts for drone delivery in unit numbers and revenues refer to "Mobile Robots and Drones in Material Handling and Logistics 2017-2037".
Conclusions
Drone delivery, therefore, is still in its infancy. It's short-term potential, we find, has been exaggerated. However, the technology has long-term future, particularly within the context of the bigger trend to automate as much as of the logistic chain as possible. Its realization will require patient investment in R&D and trials, constant negotiation with regulators, and wholesale re-organisation of distribution points and practices.
This technology will therefore be a loss marker for its main users for years to come. The ultimate grand prize of instant fulfillment will, however, drive this industry forward as players will have no choice but to continue to sink money into distribution technology/services, viewing them as marketing expenses in their battle for market share against each other as well as against traditional stores. Despite their ultimate rise however, drone delivery will remain only a small part of the much bigger commercial drone story.
For a more detailed technology and market assessment for drone delivery in the next twenty-years refer to our report "Mobile Robots and Drones in Material Handling and Logistics 2017-2037". This report covers all aspects of mobile robotics in material handling and logistics, covering last mile drones, autonomous forklifts, AGVs, AGCs, autonomous vans, autonomous trucks, mobile picking robots and so on. It provides technology assessments, detailed twenty-year market forecasts, and company overviews/profiles.
PrintForwardTweetLikePinredditShare
Previous
Next