Is Silicon the Key to Another Technological Revolution?

Is Silicon the Key to Another Technological Revolution?

Apr 28, 2020 Dr Alex Holland
Silicon is one of the most important materials of the past century. It enabled the digital revolution and the advent of PCs, laptops and smartphones. Its value has been obvious during the recent Covid-19 crisis, allowing many companies, businesses and individuals to remain productive. While the Covid-19 crisis is rightly occupying most minds, the longer-term impact of climate change could be even more damaging. Silicon, key to the digital revolution, is beginning to show potential in Li-ion batteries, a critical technology in solving the longer-term crisis of climate change.
It is perhaps a stretch to compare battery technology to the digital revolution that silicon transistors enabled, but they are undoubtedly central to the decarbonisation of modern society. On-road transport in the EU is responsible for 30% of CO2-equivalent emissions, according to the European Environment Agency. In most cases, battery electric vehicles (BEVs) are best placed to reduce these emissions (leaving for the time being arguments for/against hydrogen, fuel cells, biofuels, etc.). For those interested, the new IDTechEx report "Electric Vehicles 2020-2030" reviews the electric vehicle market beyond just cars, including analysis of vehicle segments where Li-ion may not be the optimal choice. Despite being best placed to replace internal combustion engine (ICE) cars, BEVs are still more expensive on an upfront basis, while range and re-fuelling times still struggle to compete with ICE vehicles. Increasing economies of scale, manufacturing innovations and vertical integration should help to push battery prices down further, but improved battery performance requires new materials and technology innovations, and are the topics explored in this article. More detailed analysis of all the major trends in this market, including the role silicon has to play, can be found in the new IDTechEx report "Li-ion Batteries 2020-2030".
Currently, most BEVs make use of a graphite anode with perhaps small percentages of silicon material as an additive, organic liquid electrolyte and a cathode that uses lithium nickel-manganese-cobalt oxide (NMC) or nickel-cobalt-aluminium oxide (NCA) if you are Tesla. The leading cells on the market using these materials can reach energy densities between 600-700 Wh/l, can recharge to 80% capacity in around 40 minutes (assuming reasonable temperatures) and can be cycled around 2000 times. These contribute to BEVs with ranges above 200 miles, re-fuelling times on the order of an hour and 10+ year lifetimes. Sufficient for early adopters, but maybe not for the mass market. Greater range and faster re-fuelling would go a long way to solving this.
Silicon can help on both of these fronts. Firstly, every silicon atom can, in theory, bind with 3.75 lithium ions, where it takes 6 carbon atoms to bind with just 1 lithium-ion. This results in silicon having a theoretical capacity 10 times higher than graphite. The graph below shows calculations on how much the energy density of a representative cell can be improved by adding silicon to the anode. 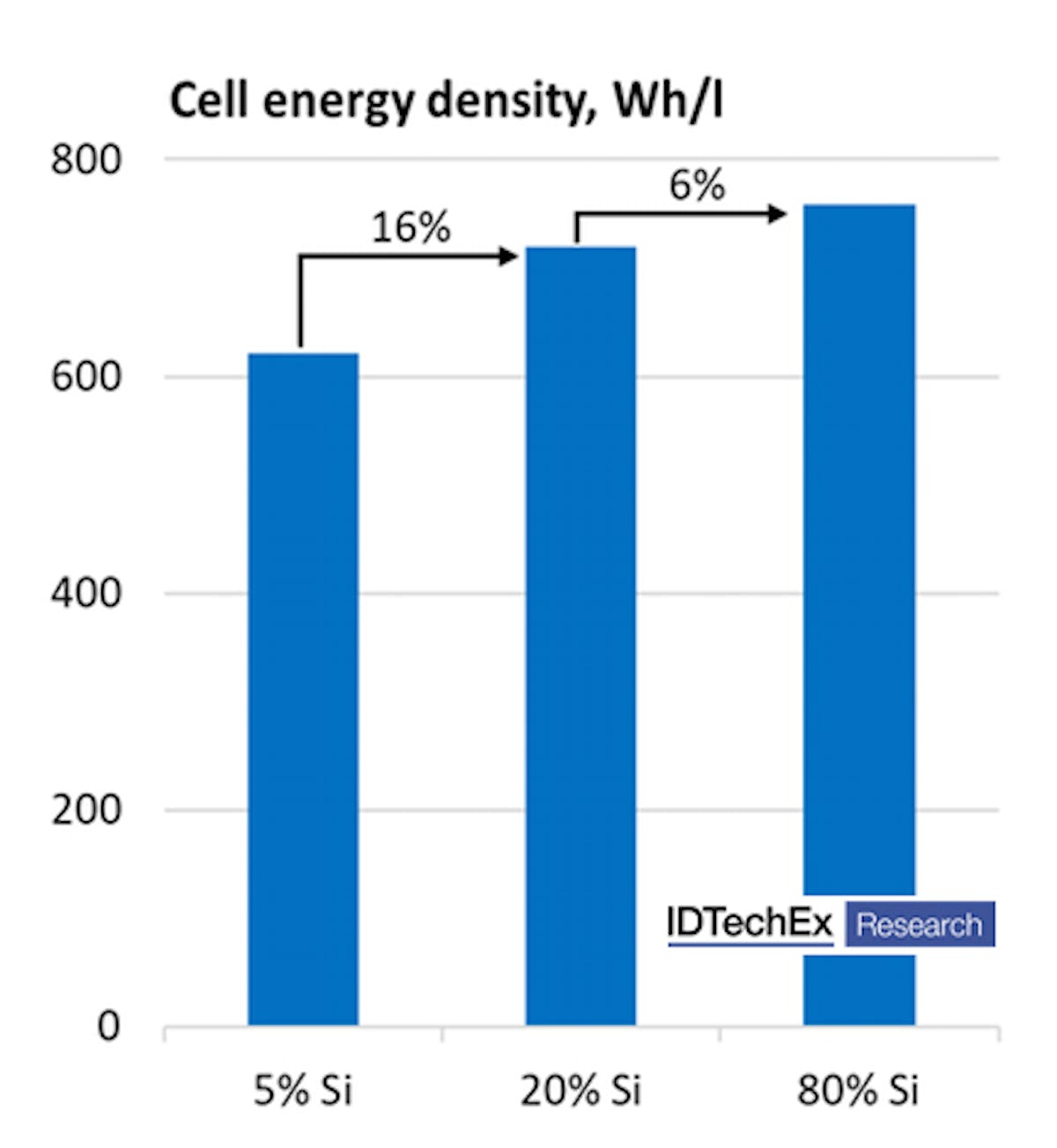 Cell level energy density increases, of a representative cell, from increasing silicon percentage in the anode. Source: IDTechEx (www.IDTechEx.com/Lithium)
Improvements may be slightly lower than expected due to aspects such as the operating voltage of silicon, capacity utilisation, electrode capacity matching and electrode density, but considerable energy density improvements are still possible. Unfortunately, improving Li-ion batteries by adding silicon is not simple. The material is plagued by one major issue: when lithiated, it can expand in volume by 300%. This causes various issues around loss of electrical connection between electrode particles and decomposition of the electrolyte, which ultimately leads to poor cycle life. A cell can see cycle life fall from thousands to the low hundreds, or worse. Fortunately, or rather through extensive R&D effort in academia and industry, a variety of solutions that mitigate against these issues are close to commercialisation.
One of the solutions to stabilise silicon cycling includes the use of highly porous materials. This provides volume for silicon to expand into but has added benefits of improving fast charge capability and low temperature operation as well, which are highly important metrics for BEVs. However, porosity does cause a problem to electrolyte stability - new problems, new opportunities to serve the needs of the lithium-ion market. Tens of companies are looking to commercialise silicon-dominant anode material, each taking different routes to stabilise the material. The huge promise of silicon and the massive growth potential of the Li-ion market means combined, Si-anode start-ups have received over $750 million in funding. 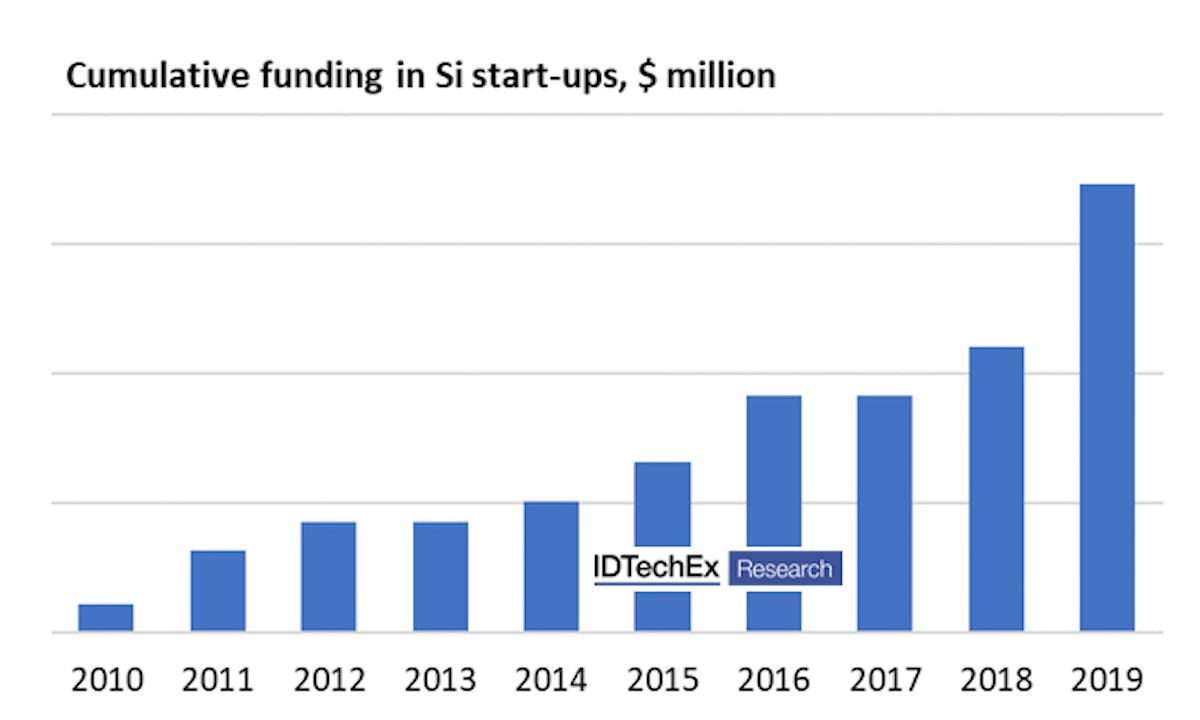 There has been continued interest in the use of silicon in Li-ion, as demonstrated by the extensive funding invested into silicon anode start-up companies. Source: IDTechEx. "Li-ion Batteries 2020-2030".
In short, silicon can provide a step-change improvement to Li-ion battery performance, not only to energy density but fast charge capability as well, helping to enable cleaner, quieter and more environmentally friendly transport. The primary hurdle is to mitigate against the issues caused by its extreme volume expansion/contraction and vast sums of money have been spent to solve these problems - companies will have to start making money soon. To that end, some are actively targeting applications that can make use of their solutions on a timescale that is shorter than possible in the automotive sector. Consumer devices and power tools have been quoted and for these applications, IDTechEx believe silicon dominant anodes may well be ready to enter the market. Beyond this, companies will have to demonstrate the feasibility of manufacturing novel silicon material and anodes, both economically and at scale. For BEVs, qualification times and development cycles are, understandably, longer. IDTechEx forecast that Li-ion batteries using silicon dominant anodes to not account for a significant percentage of total deployed capacity until the late 2020s.
The updated report from IDTechEx, "Li-ion Batteries 2020-2030", provides a deeper analysis of silicon anodes, player involvement and potential markets as well as an in-depth overview of the Li-ion market and technology more generally. UK-based analysts, IDTechEx, provide analysis and insight on various aspects of the energy storage market. For the full portfolio of energy research available from IDTechEx, please visit www.IDTechEx.com/research/ES.
PrintForwardTweetLikePinredditShare
Previous
Next