Oct 17, 2017 Dr Khasha Ghaffarzadeh
Investment in mobile material handling and logistics robotic companies is heating up. This is demonstrated in the chart below showing how the investment scene has come alive since 2014.
In this article, we provide an overview explaining the major technology changes and market trends that underpin this growing interest. We will also consider how the future will look like, discussing the rapid rise and fall of multiple technologies.
Our report "Mobile Robots and Drones in Material Handling and Logistics 2017-2037" provides a more in-depth and comprehensive analysis. It examines all aspects of mobile robotics in material handling and logistics including AGVs/AGCs, autonomous mobile material handling carts/units and vehicles, mobile picking robots, autonomous light vans and trucks, last mile delivery drones and ground-based droids, and so on.
This report provides the full picture, including a technology assessment, detailed twenty-year market forecasts clearly explaining and justifying the different phase of market evolution, and company overviews, profiles and interviews. 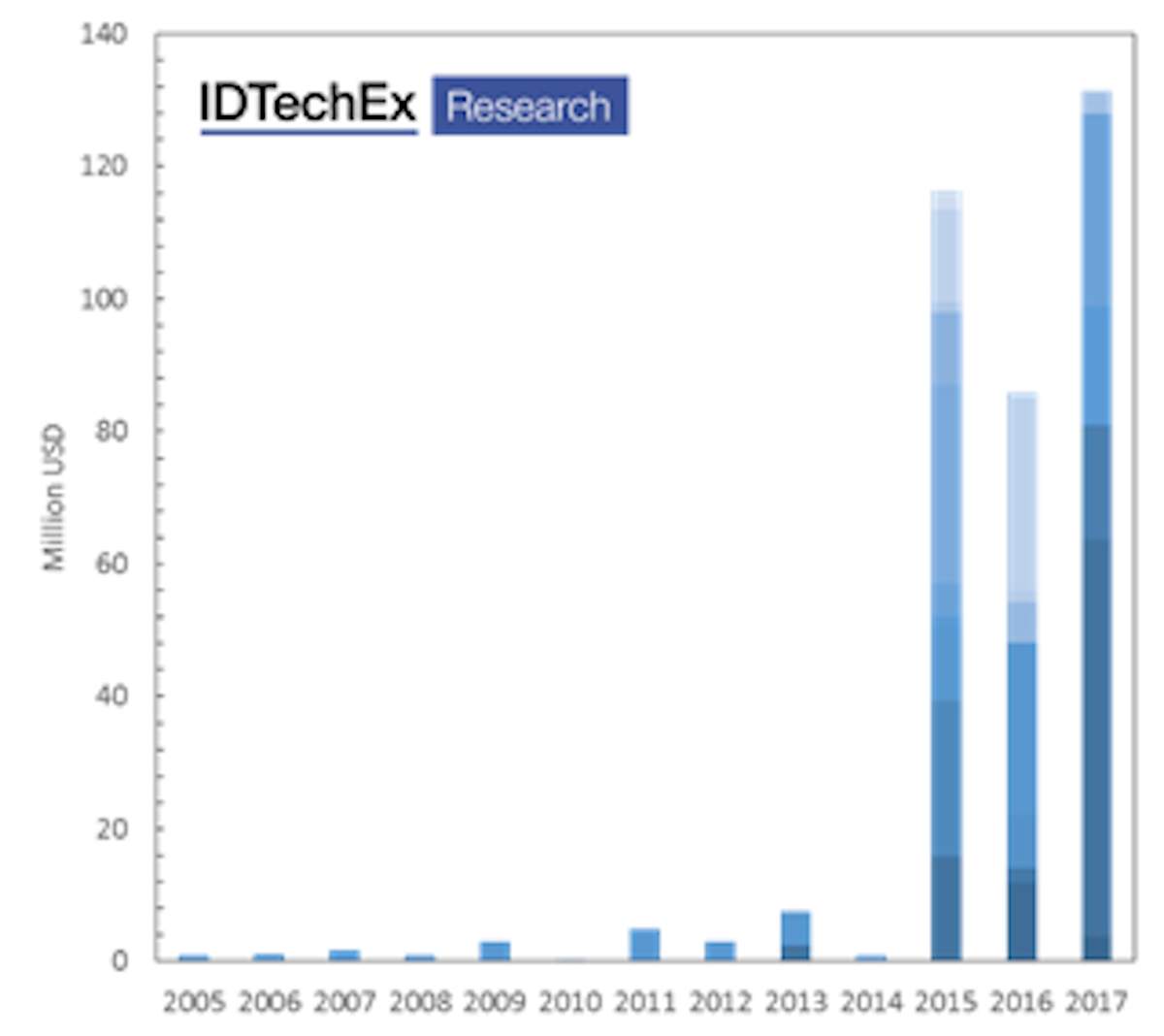 This data shows the investment data for ground-based 25 start-ups focused on mobile robotics in warehouses/logistics.
Evidently, the interest has increased in recent years in mobile robotics targeting the warehouse/logistics area.
Note that this figure excludes some major events: Does not count money spent internally by existing firms to launch such robots; Some start-ups are at seed stage with an undisclosed amount; it does not include acquisitions.
Some notable ones are Amazon's acquisition of Kiva for $775 in 2012, Omron's acquisition for Adept Mobile Robotics for $200m in 2016, and Uber's acquisition of Otto for $680m in 2016 (note Otto's acquisition is highly controversial and Google is suing, and Drone-based delivery robots are not included
New mobile robots emerge: time of transformative change
In robotics everything is changing: robots are becoming uncaged, mobile, collaborative and increasingly intelligent and dexterous, moving beyond their traditional strongholds to bring automation to previously inaccessible tasks.
Automation in material handling and logistic industries are also no exception. Indeed, investors are eyeing mobile robotics opportunities at every stage of the journey of a product; from raw materials, all the way into the end consumer's hands: material handling, movement within facilities (e.g., factories & warehouses), goods transport on the ground over long distances and last mile delivery. The schematic below depicts the number of firms positioned at each stage of this chain, showing an increase.
AGV faced with obsolesce?
Automated guided vehicles (AGVs) have been around since the 1950s. They act essentially as semi-rigid distributed conveyor belts covering large areas. Here, the vehicles merely follow guideposts fixed into the infrastructure. They are therefore rigid systems that require infrastructure modification and are time-consuming to install and commission.
AGVs are now a mature technology that can safely transport payloads ranging from several Kgs to multiple tonnes. This mature industry has a fragmented business landscape where most firms offer a comparable level of technical competency; therefore price competition is rife.
The navigation technology has been changing over the years with laser guidance systems becoming more popular of late, whilst wire and magnetic tape keep their grip on the low-cost or hybrid indoor/outdoor end of the market. The business overall is showing modest growth and has somewhat diversified its customer base to minimize heavy exposure to the automotive sector.
All this may give an illusion of long-term industry security, except that the foundations are shaky. This is because navigation technology is evolving towards full infrastructure-free autonomy, enabling flexible robots that are quick to install and can safely share a workspace with humans.
In time, this technology has the potential to render AGVs obsolete whilst enabling mobile robots to leave the structured and confined environment of factories and warehouses to enter into less structured spaces of general life that were hitherto inaccessible to robots. This will be transformative.
It is this type of mobile robot that has caught the eye of investors. The incumbents can change but that requires fundamentally altering their skillset towards software. The emerging robots too will in time commoditize once they leave this current phase where hardware is an integral part of the software and where acclimatising the robot to a given environment gives a competitive heads-up. The opportunity will then shift towards new offerings based either on Robots-as-a-Service or high-value data analytics with fleets of mobile robots acting as roving data acquisition infrastructures.
To learn more about this changing landscape refer to our report "Mobile Robots and Drones in Material Handling and Logistics 2017-2037". Here, we provide a detailed and quantitative assessment of these emerging robots. We offer a twenty-year market analysis forecasting the future, in revenue and unit numbers, of AGVs as well as this new type of autonomous mobile robots. We provide technology assessment and benchmarking, company overviews, profiles and interviews, trend and investment analysis and market forecasts with clear explanations of different phases and conditions of market evolution.
Rush to fill gap left by Amazon
Amazon's acquisition of Kiva for $775m in 2012 kindled interest in grid-based automated guided carts (AGCs). Here, small robots move underneath totes, or shelves, lift them, and move them within a grid system marked by regularly-placed barcodes to bring the items to a stationary human packer (still dexterous compared to a robot). This is a true goods-to-person system which fully eliminates the time workers spend transporting items. This saving, together with the system's fleet and inventory management software- a key source of value- bring productivity gains, justifying the design of compact warehouses around this principle.
The Amazon acquisition however left a glaring gap since it took the technology completely off the market. Amazon thus left no alternative for other warehouse/logistic firms. This was perhaps to keep the advantage to itself- however short-lived that may be- or to not share the data/optimised algorithms in its inventory management software.
In any case the result is that numerous well-funded firms have emerged, and continue to emerge, to fill the gaps. This is global trend with companies in India, China, Europe, and USA all offering a system that is basically an adaption of the Kiva concept with some modifications here or there. This is justified because the need is large and the market global, and no company has yet won the race to establish market dominance.
Note that here too more flexible systems that offer autonomous infrastructure-free navigation are emerging. Furthermore, the outlines of a battle is taking shape between warehouses centred around flexible autonomous mobile robots where humans/robots co-exist and those designed around the total goods-to-person principle enabled by Kiva and the like.
Read our report "Mobile Robots and Drones in Material Handling and Logistics 2017-2037" to learn about this market. Here, we provide an assessment of the AGC market, forecasting its short-term as well as long term future in unit numbers and revenues. We also review the key companies around the world, whilst also examining the latest technology trends. 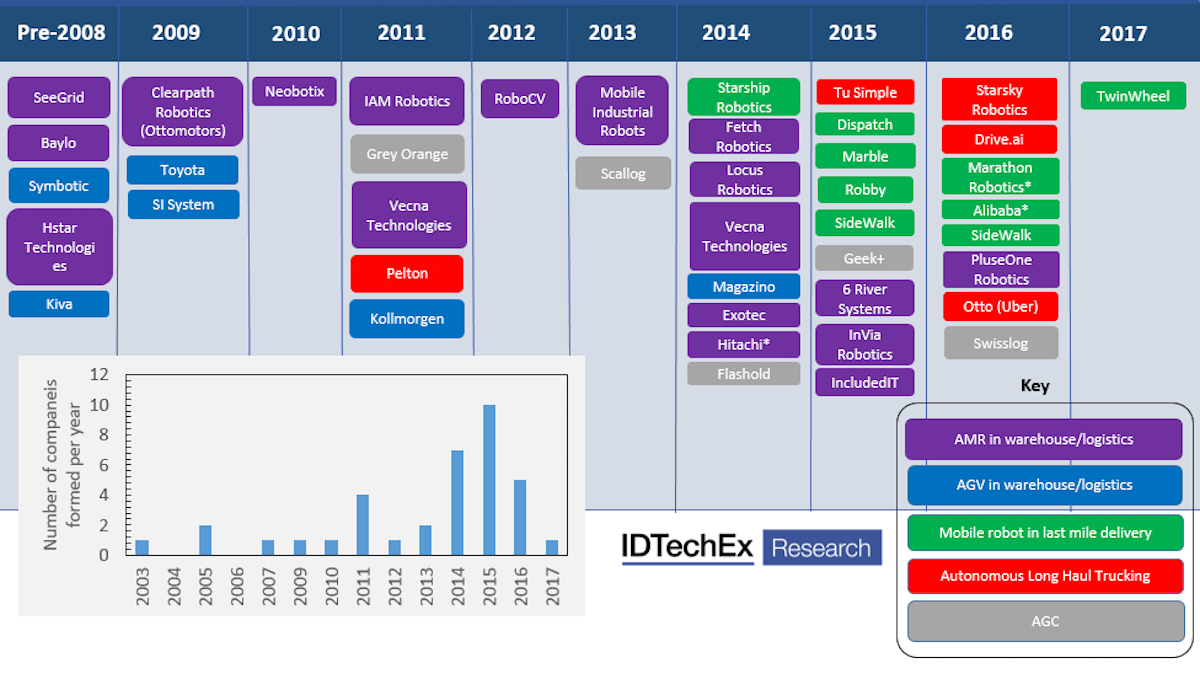 The above schematic shows the establishment year of different companies. The colour coding demonstrates the type of the company. The number of autonomous mobile robotic companies is on the up. Note that AGV technology is mature (available since the 1950s) and is thus generally not included. The trend is to increasingly transition from AGV to AMR. Will all forklifts be autonomous given sufficient time (i.e, 2-3 decade)? Shall we not prepare now? Read more at "Mobile Robots and Drones in Material Handling and Logistics 2017-2037".
Forklifts will never be the same again
Autonomous navigation in the semi-structured environment of warehouses/factories will also transform the industrial material handling vehicle industry. It will enable a colossal transfer value from wage bills paid for human-provided driving services towards capital expenditure spent on vehicles. This transfer will take place over the next two decades, whilst the technology learning curve will devalue driving-service, particularly in high-wage regions. The diffusion of this technology is still in its early slow phase but our model suggests that it will accelerate after reaching an estimated turning point around 2023-2025.
The transformation will also create opportunities for investors. Big forklift companies are already moving to acquire automation firms in their search for rapid revenue growth. They will also have to obtain, one way or another, autonomous driving technology so as to be strongly positioned for the long-term.
This is in fact already happening with investment in or partnerships with autonomous vehicle companies active in material handling. This trend too will continue. For more details about our assessment of the future of this industry, expressed in detailed twenty-year forecasts (revenue/unit numbers) refer to "Mobile Robots and Drones in Material Handling and Logistics 2017-2037".
Mobile picking robots will learn
Mobile robotic picking is generally restricted to stationary robotic arms operating on known objects in controlled environments. The artificial intelligence technology for robotic grasping is, however, changing with a transition taking place from deterministic scripting towards perception-driving learning.
In the past five years or so several major research groups have demonstrated that robots can learn to grasp novel, varied objects with accuracy levels around 80-85%. Performance levels, even in the labs, are sub-human but this is changing fast.
Indeed, already companies are actively generating data to train their robots, and cloud robotics will help with the rapid sharing of data and learning at scale whilst helping lift the computational burden from the robot itself and onto the cloud. This will be particularly important in mobile robots which have constrained on-board computing power and energy supplies.
In parallel, soft robotic technology is offering innovative end effector designs that can adapt their shape- without computer guidance or instruction- to the target object. For certain objects and cases, this will dramatically ease the intelligence challenge in picking (identifying objecting, recognising optimal grasp point, developing approach path, etc).
This is opening up a new opportunity for mobile robotic companies. Already firms are rolling out the first few commercial trial units to operate in warehouses picking known and regularly-shaped (e.g., boxes) objects. In fact, some even claim reaching picking rates and accuracy levels exceeding those of humans.
This technology is improving fast. As with many other deep learning technologies, it will also soon enter its own phase of diminishing returns where significant additional time and data will be needed for small improvements. Nonetheless, the reliability and safety requirements are nowhere as onerous as those in, say, driverless cars thus roll-out will happen much sooner.
In our report "Mobile Robots and Drones in Material Handling and Logistics 2017-2037" we provide a forecast model showing how mobile picking unit will evolve going through different phases of performance (sub-human, approaching human, and potentially exceeding human) over a twenty-year period for both regular and irregular or mixed shaped items. We provide forecasts in unit sales as well as revenue. We further include company overviews and interviews as well as technology analysis.
We will leave the discussion of trends in autonomous trucking and light delivery vans, as well as mobile robots (drone and ground droids) to another article.
For more details see "Mobile Robots and Drones in Material Handling and Logistics 2017-2037".
PrintForwardTweetLikePinredditShare
Previous
Next