Apr 19, 2016 Dr Khasha Ghaffarzadeh
The OLED lighting technology faced a difficult challenge since the very beginning in the shape of inorganic LEDs. The challenge was that LED lighting got there first and leveraged its accumulated production experience to improve its performance and to reduce its costs. This in turn created a large gap between the two technologies that shows no signs of narrowing.
The OLED lighting industry generally had a confused commercialization strategy. The LED incumbents viewed OLED technology as a threat and as such invested only to hedge their bets. Some ignored the potential uniqueness of OLED lighting, trapping themselves in the rigid (glass-based) and/or high-power corner of the markets.
Unsurprisingly, all these led to failures and disillusionment. Many simply gave up and now few committed players remain. Most notable amongst them are LG Chem and Konica Minolta. Both are from Asia and both see in OLED lighting a way into the immense prize that is the lighting market.
We got it right, so far
IDTechEx Research had anticipated these trends and developments in its market research report OLED Lighting Opportunities 2016-2026: Forecasts, Technologies, Players. We had warned about the consolidation, confused commercialisation strategies and also the limited short-term market prospects of OLED lighting technology. Indeed, in 2014, we forecast that the market would be smaller than $80m by 2018 and we still think that this will hold true.
We even correctly modelled and anticipated the price evolution of OLED panels. We anticipated in 2013 that the production cost will reduce to around $200/klm by 2015. This was confirmed when LG Chem announced a very aggressive sales price of $200/klm in mid-2015. Our model enabled us to conclude that the panels were being sold at or below cost in order to stimulate the market. 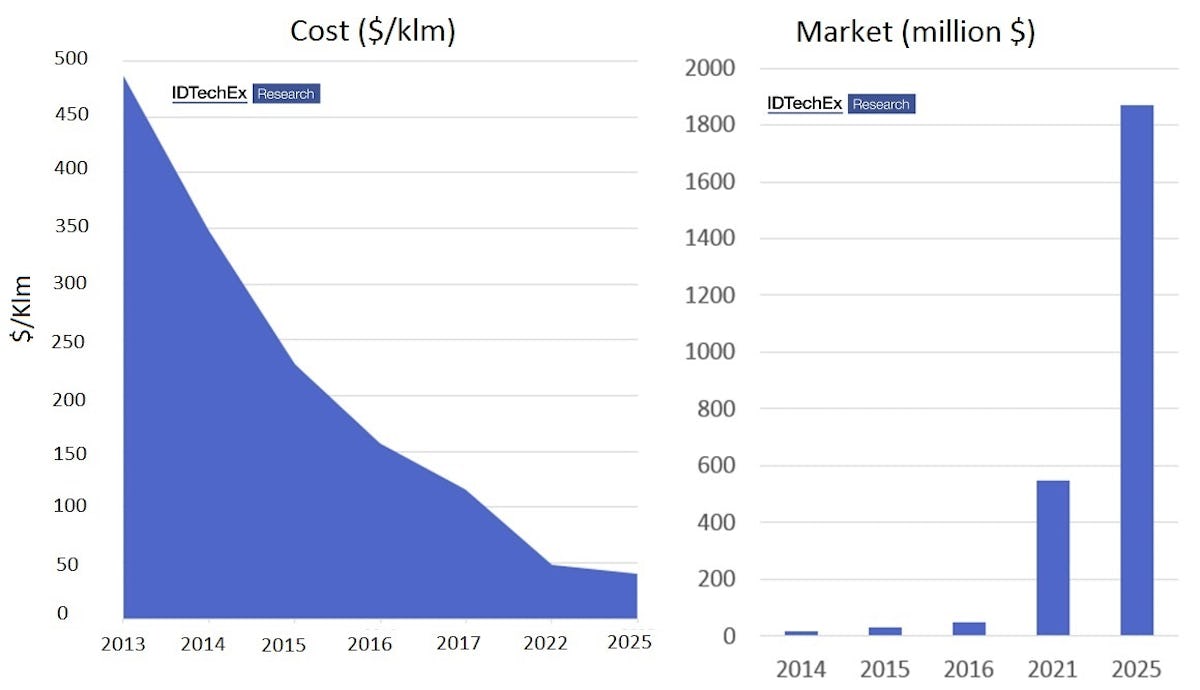 Left: IDTechEx cost projections developed in 2013. Right: Segmented IDTechEx Forecast developed in 2013. Source: IDTechEx Research.
What does the future hold for OLED lighting?
IDTechEx Research had also forecasted that OLED lighting will reach more than $1.8 billion in 2025 at the panel level. We still remain optimistic about the long-term prospects of this technology. This is because OLED lighting exhibits key characteristics of a disruptive technology: it underperforms and is overpriced when measured on the standard industry figures-of-merit such as lm/W and $/klm; but it can create new markets that value novel figures-of-merit such as large areas emission, light-weight and flexibility.
IDTechEx Research believes that OLED lighting can exploit these differentiators to cultivate a series of niche markets and use its accumulated industry experience to become good enough in an increasingly series of established segments.
This process will be helped by two fundamental characteristics of the lighting market: enormous product diversity and importance of aesthetics. This is in contrast to, for example, the photovoltaic market where there is little product diversity therefore emerging technologies as OPVs find it exceedingly hard to create niches.
Ultimately, however, the future will depend on whether the believers will keep faith through this period of disillusionment. We certainly hope that they do.
PrintForwardTweetLikePinredditShare
Previous
Next

RADAR and LIDAR So What's New?
Highlights from the IDTechEx Show!
More