Aug 03, 2015
This event of a few hundred people and twenty or so exhibitors had a good range of coverage from many choices of EV test drive to sitting in on focus groups of people minded to buy an EV. Reflecting the success of electric buses this year, BYD was ferrying people in its large pure electric coach and Proterra, US champion of pure electric buses, spoke at the event. Hybrid buses are not a focus these days. See the new IDTechEx report, Electric Buses 2015-2025.

The conference sessions, most of which were parallel had high calibre speakers including a significant input from the automotive and government research giants and companies abroad. Indeed one of the best presentations was by Ola Elvestuen Chair Energy and Environment Committee, Member of Parliament Norway and former Deputy Mayor of Oslo. He basically described how Norway is doing everything right, starting with 95% hydro power and moving to all new cars EV in Oslo by the end of 2015, Public Transport fossil free by 2020 and Taxis zero pollution 2022 a far cry from the London equivalents killing thousands yearly with no end in sight although he was too much of a gentleman to point this out. 45% of people now take the bus up from 35% earlier. Despite that hydro power, Norway is reducing climate gas emissions 40% between 1990 and 2030. 100% 0f new cars will be zero emission in 2025.
In the exhibition, a nice change from the usual suspects was the large "Farm Dog" quad bike of CEO Melissa Brandao Rogue Rovers who targets agriculture and specifically what she describes as the 5.4 million small farmers in the world constituting 90% of all farms. 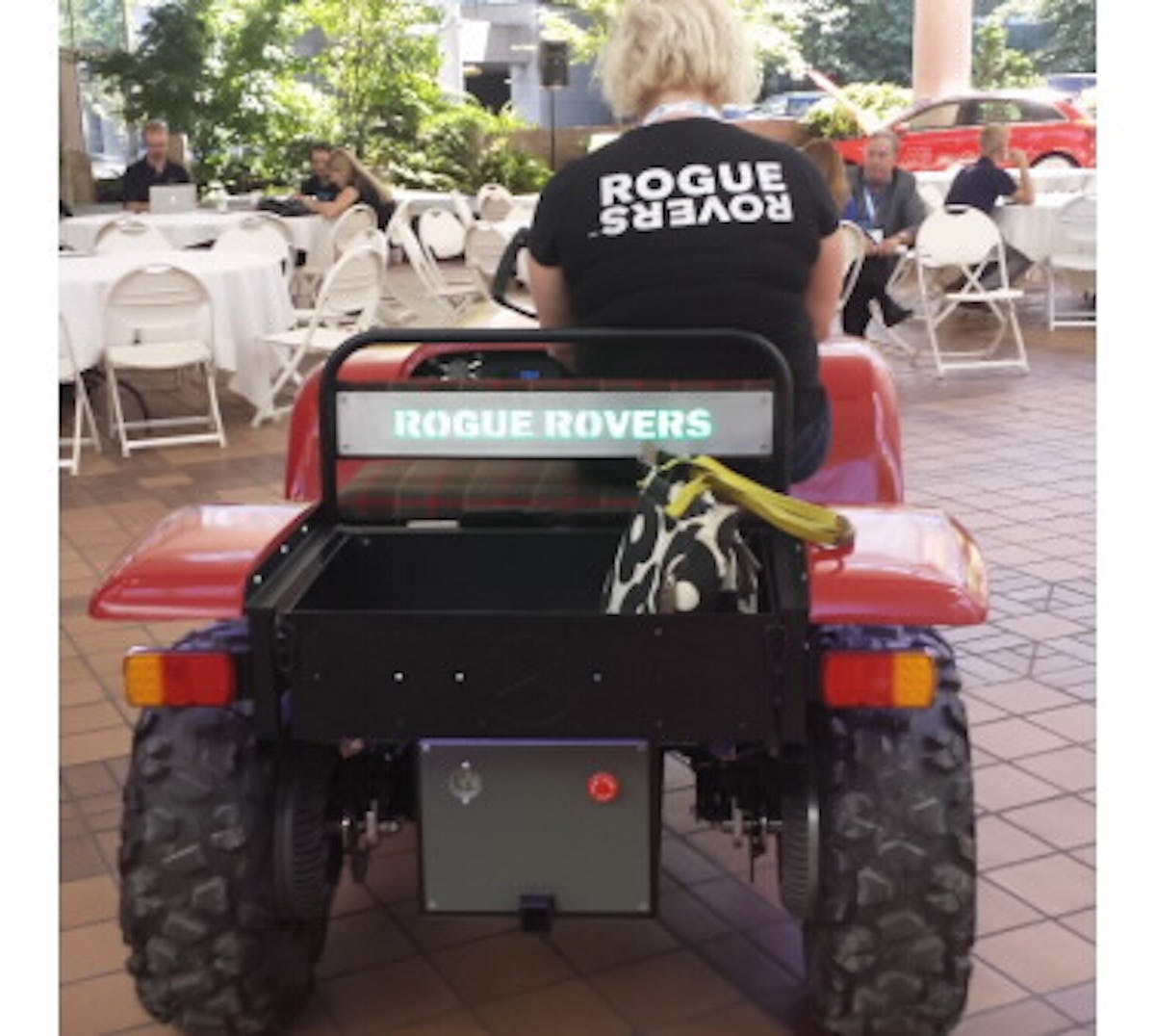 Her $10K vehicle is intended for both autonomous and manned use so it operates like a dodgem - pull back on the accelerator it brakes. Unlike the similar looking Polaris vehicles such as the Ranger being for leisure use, this addresses the needs of farmers from a standard platform basis something IDTechEx has long advocated. In autonomous mode it will have sensors for measuring acidity, temperatures and so on with data collection. "Software is all I need to go to autonomy now," she said. It has a lithium battery giving about five hours duration in an agricultural terrain and she is aware of the potential of new components such as energy harvesting shock absorbers she understands are being developed at Penn State and the University of Texas.
The panel discussion/ short presentations on "Here Comes Long Range EVs" was loaded with the status quo and how impending 200 mile range in affordable cars ($20-$35K) will not excite most people, though Tesla saw it as impactful and 300 mile range may or may not do so.
There was discussion of charging points which really concerned dealing with inadequate range. Chargepoint claim to be number one with 22K installed. Tesla has adjusted strategy to reflect the popularity of its superchargers. Plugshare saw fast chargers as the big demand but mostly it was Level 3 at typically 30-60kW not Tesla at 125 kW and rising. On the second day there was a complete session on contactless charging reflecting the surge in interest and the plans of several leading automakers to incorporate them in coming years. 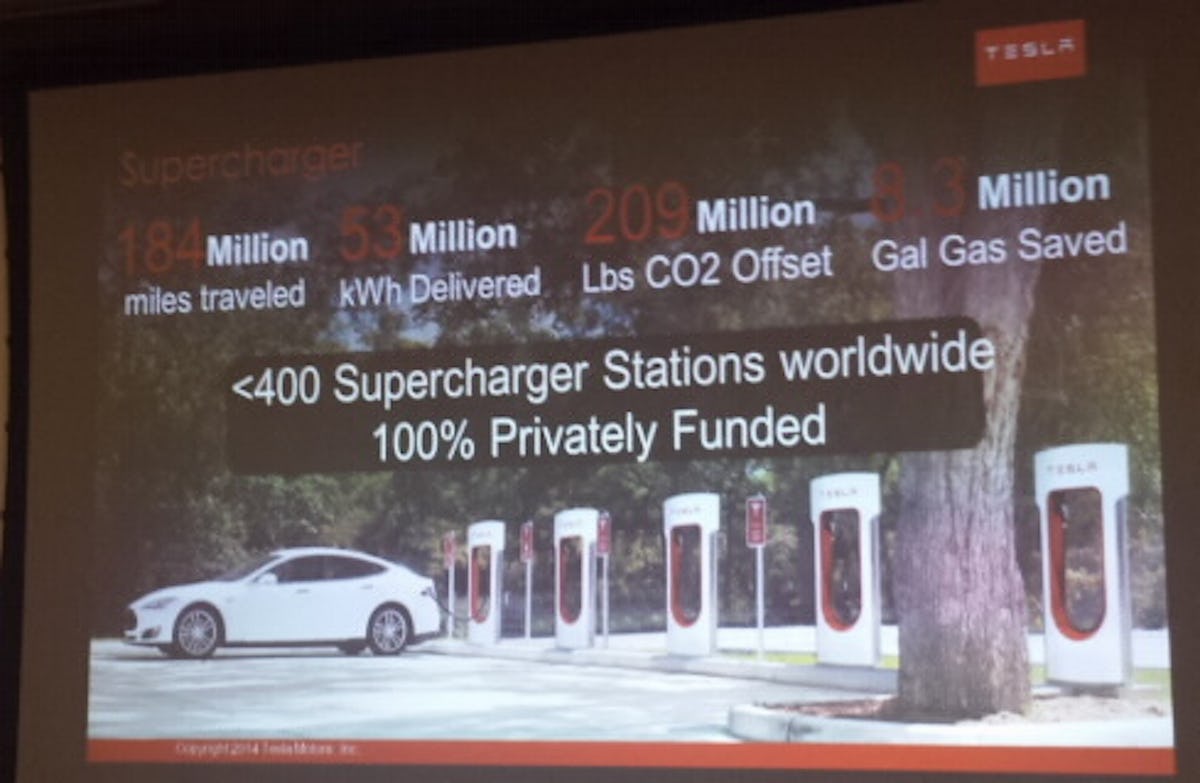 Roadmaps of battery and - equally important - other range enhancements such as structural electrics and other lightweighting, more efficient powertrains and aerodynamics were sadly missing from the long range discussion. No one would be drawn on where range will be in ten years from now. Ford said grid interaction is already happening with a 200 mile range car: increased range boosts this adoption. Extra range means people drive more miles. Ford said longer EV range will probably push average usage to conventional vehicle mileage levels.
Honda showed slides of their latest on their fuel cell concept car with range matching the Toyota Mirai fuel cell car and Tesla S pure electric car at around 300 miles and a powertrain now to conventional format and insertion from below. The implication seemed to be that Honda is not yet certain which powertrain will win for large cars and bigger vehicles. 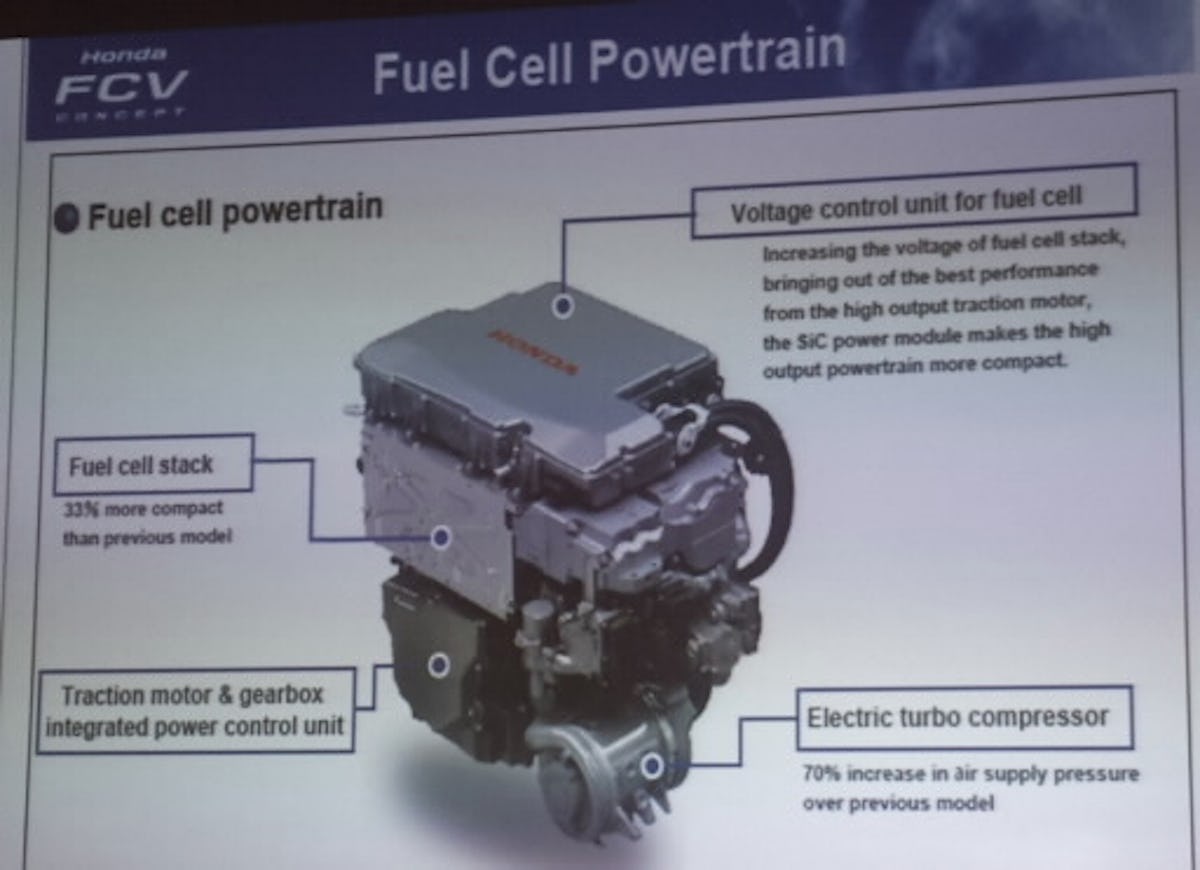 The "Electric and Connected" session was very good with Jaguar Land Rover describing work on open infotainment systems and a graphic description of the different approach of the next generation of young drivers with their demand for a mobile phone world of constant updates and interoperability. 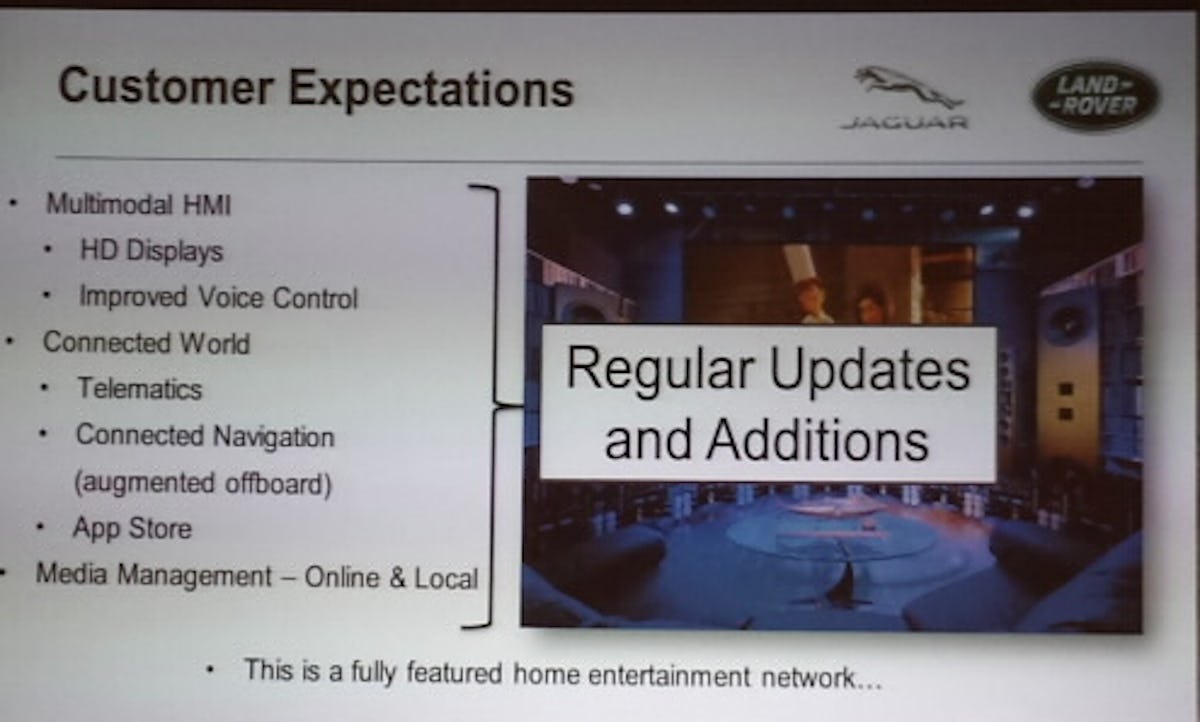 Intel, EPRI, NREL and Empirical described fascinating challenges including subtleties of human psychology when making a vehicle anticipate needs.
Energy harvesting
Regenerative braking is now a given and people were aware of the impending regenerative suspension and energy harvesting shock absorbers but solar panels on vehicles were not discussed. Solar charging stations were promoted by exhibitor EV4 of Oregon and Plugshare promoted solar and wind turbines as charging sources as well as vehicle to grid improving viability. The IDTechEx stand saw great interest in its new report High Power Energy Harvesting 2015-2025 as this covers many new "free" ambient energy sources being tapped to charge vehicles off-grid as well as a large number of energy harvesting modes soon to be seen in the vehicles themselves.
PrintForwardTweetLikePinredditShare
Previous
Next