Feb 05, 2021 Dr Peter Harrop
Sensors are a business of extremes. Many drop to one-thousandth of the price by achieving one thousand times the number sold and by clever redesign. That happens with the sensors in our mobile phones. It needs to happen with LIDAR in robot vehicles. With sensors, the systems and software are a bigger business than the sensors themselves. For example, your body has primitive sensors such as eyes and fingers, but it processes the data in combination, so the whole is greater than the parts. Call it "sensor fusion", something increasingly seen in the automotive, healthcare, and robotic industries.

Sensors for Internet of Things

The Internet of Things (IoT) was promised to be billions of nodes yearly, each with a transceiver, microprocessor, and several sensors inside, all at an affordable few dollars each or less. Those things were going to collaborate with each other for human benefit but without humans involved at the time. Each node was to be connected directly to the internet, unlike anti-theft tags, RFID, and LPWAN nodes. Sadly, in those terms, the IoT is deploying one-thousandth of the promised number because they are rarely fit-and-forget and affordable.
Another system may come to the rescue around 2030. 6G Communications will, for the first time, merge communications, sensing, positioning, and other aspects in one system to replace 5G. 6G will serve nodes and devices with no power or little power, solving that IoT problem. Importantly, 6G Communications breaks with tradition by being as much about sensors, positioning, imaging, and edge computing as it is about communications. Proponents say it may do away with all those expensive LIDARS and RADARS in robot vehicles, so we do not have to get their price down after all. That may be true, but Tesla develops vehicles that navigate without connectivity so they can go anywhere.

Huge new needs for new sensors are part of the sensor melodrama. For example, there will be 500 million people with diabetes in the world soon and they may value a blood glucose monitor you simply wear - non-intrusive. So what is the overview? Sensors will always go on things more than people. However, they will often be biomimetic - usefully copying nature.

Patents must be treated with great caution because, for example, the Chinese tend to patent the sensor system, not the sensor itself. Japan, China, and Korea develop sensors more intensively than most other countries.

Patent trends, taken with other indicators, show us where the research pipeline and possibly the sales value are headed. Sensor patenting is extremely strong and little affected by recessions or COVID-19. Partly this is because they are a key enabling technology for more-and-more tasks in more-and-more types of equipment and in more-and-more locations.

Smart cities have huge investment regardless of recessions. NEOM in Saudi Arabia has a budget of $500 billion, for example, and its zero-emission, high-security, robotic approach calls for a vast number of sensors. Its first smart city, 'The Line', will accommodate one million people with no commuting to work. It is being reclaimed from the desert, so water production and conservation alone requires many sophisticated sensors. Forest City being reclaimed from the Malaysian sea has equivalent needs and a useful $100 billion budget to satisfy them. 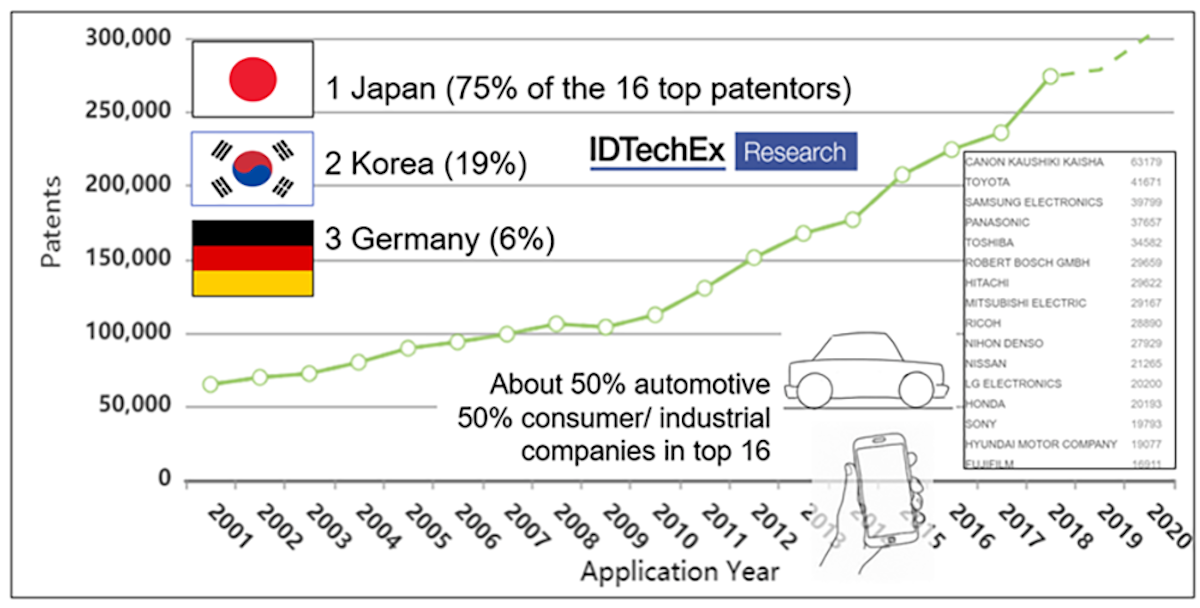 Where are the leaders headed?

Let us look closer at those leading patentors. What types do they lead in? Below are their places in the league table by parameter measured. For example, Samsung files the most patents in the world for accelerometers/ measuring acceleration. An interesting first observation is that many of the leaders are patenting sensors to protect the equipment they put those sensors in, not because they wish to sell individual sensors. 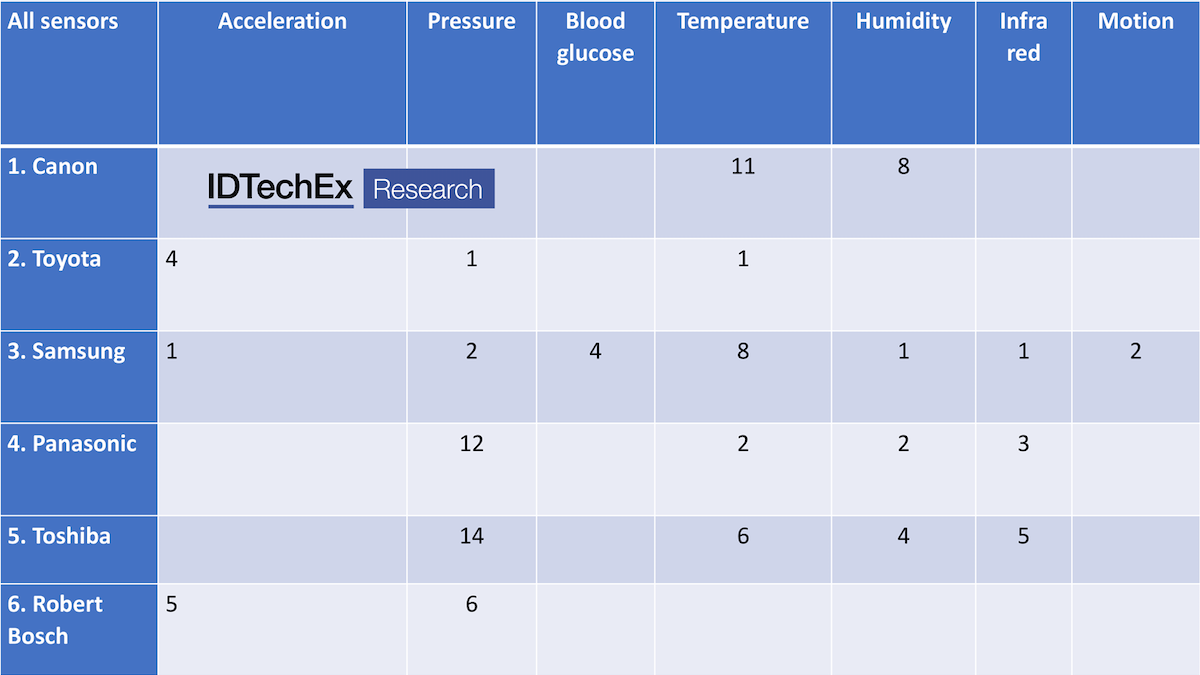 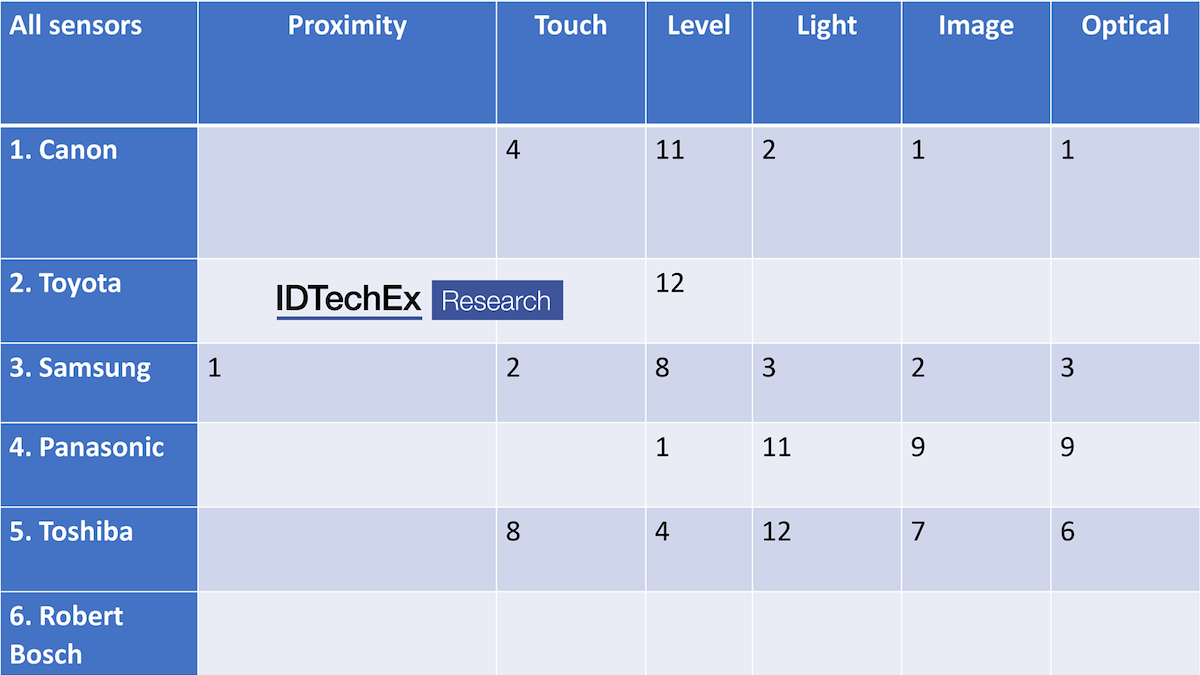 Leading sensors patentors. Source: IDTechEx
Canon is intensively focussed on light/ imaging and related topics like touch. The Toyota activity may be consistent with its declared determination to put combustion engines in vehicles for longer than much of its competition. Its projections for its future battery electric vehicle sales are a long way behind leading developers such as Tesla and Volkswagen. However, Tesla has few patents, yet its market value dwarfs that of all other automotive manufacturers showing that patents are only part of the story.

How are these leading patentors performing in three up-and-coming sensor types - vehicle RADAR, LIDAR, and biosensors? There are two definitions of biosensor, and here we use that relating to the use of biological mechanisms to perform sensing. We do not mean any parameter measured on a living thing. 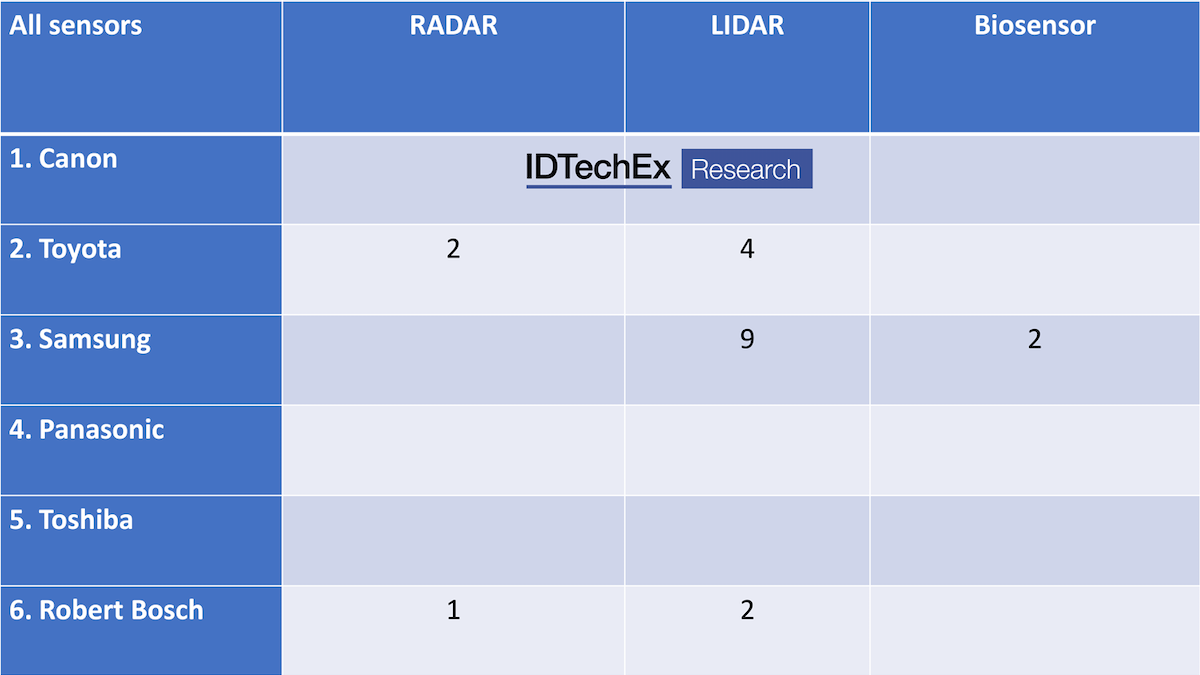 Leading sensors patentors in up-and-coming sensor types. Source: IDTechEx
Toyota is seen to be very active in robot vehicle technologies RADAR and LIDAR. Its multi-purpose e-Palette robot shuttle is the basis of Toyota's planned Woven City at the base of Mount Fuji. Samsung is clearly expanding strongly into healthcare because the biosensor principle is particularly favored in the medical industry. Of course, a part of that is the mobile phone becoming a medical device. Samsung intends to remain a leader in mobile phones.

Now here is a surprise. What parameters were first sensed a very long time ago so you may think those sensors are now mature and no longer researched. Temperature? Pressure? In fact, these "unexciting" subjects are the basis of large and rising numbers of patents. There may be 50,000 patents filed in 2021 for temperature sensors alone! The reason seems to be the burgeoning variety of specifications demanded for "unexciting sensors" and the need for ongoing cost reduction by redesign.

Let us finish by looking at some sensor superlatives. They can be understood by realizing that imaging is key to personal electronics, entertainment, healthcare, and robotics. Temperature sensing is vital from battery electric vehicles to industry, military, healthcare, environmental and other sectors. Cleaning the environment and keeping it that way is one of the new megatrends. 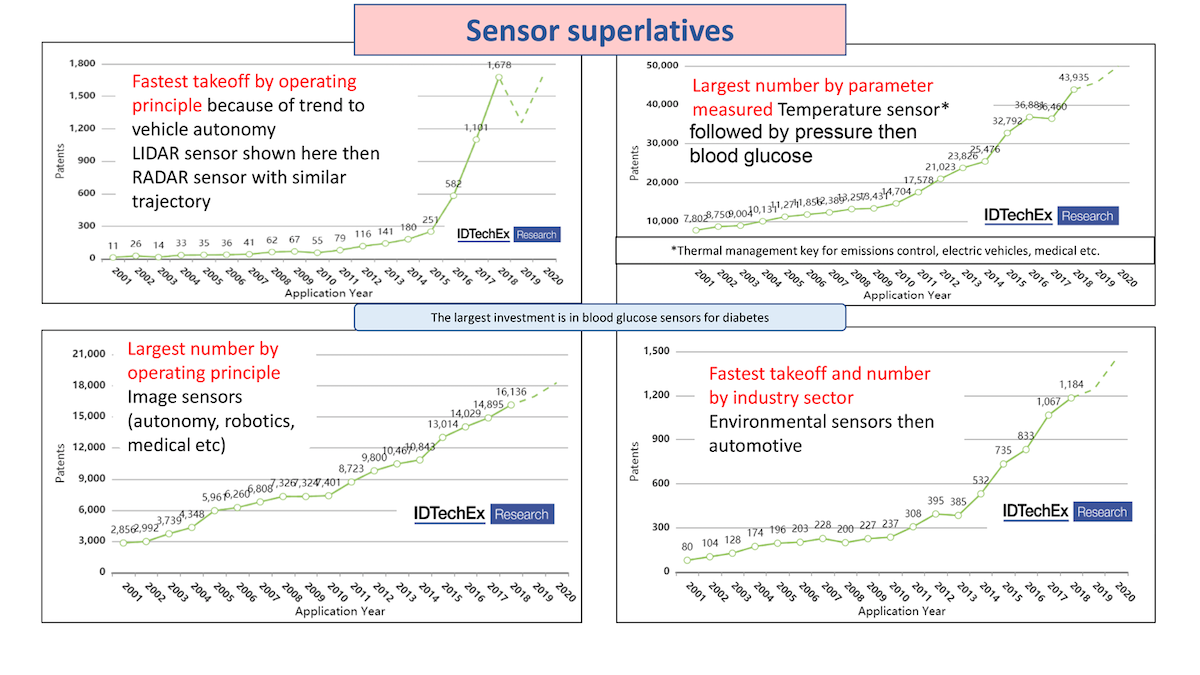