Nov 26, 2012 Dr Harry Zervos
The IDTechEx report The Market for Gold Inks 2013-2019 is looking to identify and assess the opportunities for a printable nano-gold ink, excluding its use in graphic arts applications (where it could be used for both its graphic arts benefits in addition to being used as a functional component in a circuit, such as printed touch switches, are taken into account).
The performance of current nano-gold inks has been assessed and it has been found that its conductivity is usually comparable to that of the most commonly used printed inks (silver and copper) - although one company that has used gold ink, but doesn't want to be named, told us "Gold has a volume resistivity 53% greater than silver, which translates into a required 53% thickness increase for a gold circuit to have identical resistance to a silver circuit." However, for a given metal ink the ranges in resistivity are large depending on particle size, carrier material, loading, sinter/cure process etc, and nevertheless the conductivity of nano-gold ink is acceptable for many applications.
Compelling benefits highlighted by potential users in our interviews were its high stability - unlike silver there is no crystal growth which is often damaging when interfacing with other materials - and no tarnishing, leading to high reliability and longevity. It has a high work function making it of particular interest as an electrode in many printed architectures. It is also of interest to those working with organic materials as these are prone to failure over time when interfaced with silver electrodes due to migration issues.
The cost of gold versus other precious metals
However, gold's high cost is an important disadvantage - starting with the costs for the bulk material. The graphs below showcase the difference in price between silver and gold in recent years.
Prices for silver ink are already considered too high, with efforts underway to identify solutions such as copper-based inks in order to reduce costs. This involves also overcoming issues such as surface oxidation of copper (copper oxide is not conductive but silver oxide is) by using other thin layers as interfaces or protective layers. Overall, according to IDTechEx interviews, where the use of a gold ink can be avoided, it will be, and companies are willing to explore different possibilities that would lead to improved cost structures. Despite this, we have identified some market opportunities where the benefits of using gold could potentially outweigh the higher cost.
Figure. 10 year gold/silver ratio 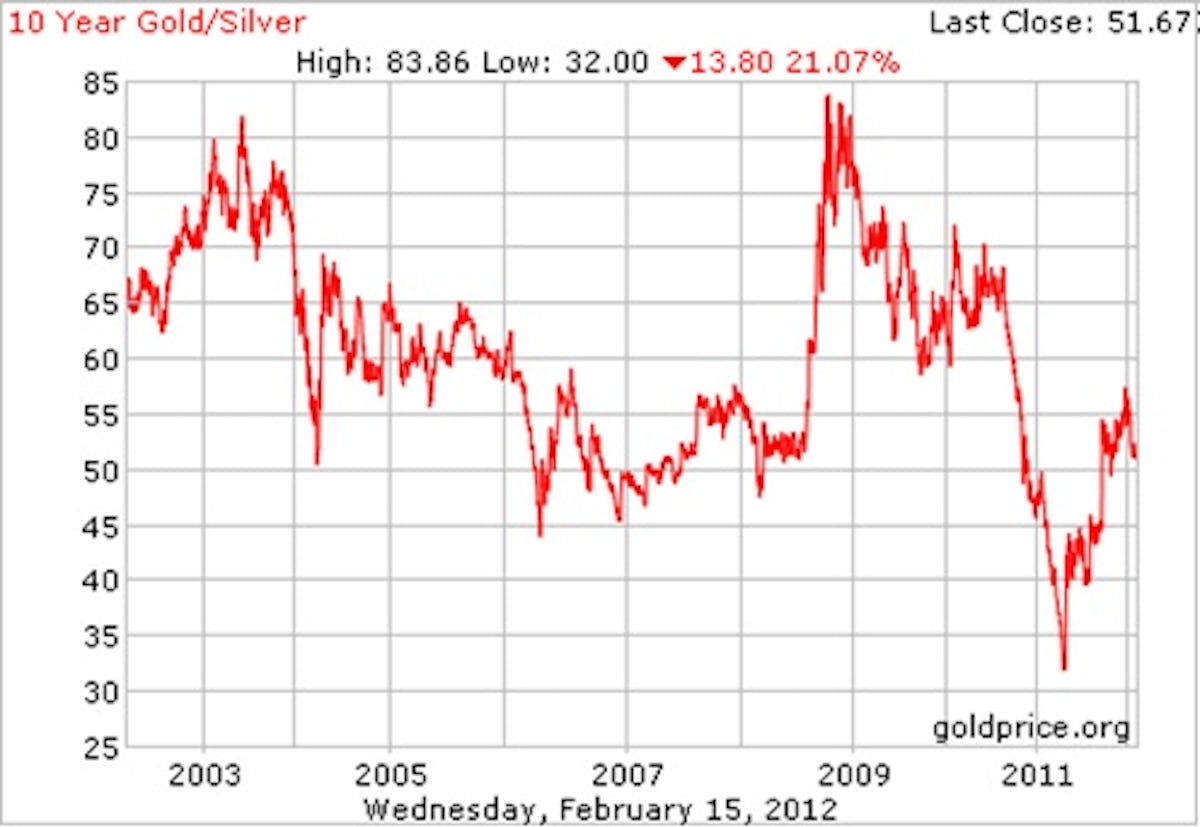 Source: J.M. Boullion
Applications of gold inks
There are several organizations using nanoparticle gold inks today, but most of the work is R&D and some way from commercialisation. Making OPV or TFT prototypes utilizing gold electrodes is a far cry away from full scale commercial production where golden printed electrodes would constitute a prohibitively expensive option.
This indicates that the high cost of gold is the biggest barrier for adoption, but there are a number of niches where nano-gold ink could potentially be used in commercial products. These include pharmaceutical applications where gold is being utilized already. Deposition techniques currently utilized are adding cost to the final devices so pharmaceutical companies are looking to replace them with additive printing techniques, one major point is always made clear though, and that's the fact that there can be no compromise in the performance of the final device due to the difference in deposition techniques.
However, it is important to note that companies will look for alternatives in production if they could offer cost reductions, and it is not clear due to the early stage of the industry how successful some of these gold-based components will be. Based on our estimations in the IDTechEx report in which we study the benefit gold brings www.IDTechEx.com/gold, the market opportunity for a nanoparticle gold-based ink could be of the order of $10 million by 2016.
For more information on other conductive inks, such as silver and copper-based flake and nanoparticle based formulations, please see Conductive Ink Markets 2012-2018.
PrintForwardTweetLikePinredditShare
Previous
Next