Jul 22, 2016 Dr Peter Harrop
The saying is, "In a gold rush, get there first, sell shovels". The "shovels" of the EV business are covered in the unique new IDTechEx report, Industrial and Commercial Electric Vehicles on Land 2016-2026. It is pivotal in any understanding of the EV business, hybrid and pure electric, because this category will be responsible for around 60% of the huge market of about $500 billion emerging in 2026. Indeed, it is and will remain more profitable than the highly competitive car market that gets all the press attention. The report gives the big picture not available elsewhere, for example, putting the business in the context of water and airborne commercial and industrial EVs and of 48V mild hybrids which are not electric vehicles in their initial form: only later do they evolve into vehicles with some pure electric modes as industrial and commercial versions become significant.
This is a world where billion dollar orders are being placed for electric buses and even for their batteries alone and a $20+ billion business in electric forklifts and other intralogistics is emerging. It is an industry in rapid change - geographical, technological and applicational. Three wheel electric taxis will sell in millions yearly and mobile industrial and commercial robots are appearing in a host of forms - it is all here.
The Executive Summary and Conclusions gives new infograms and forecasts explaining it all in an easily understood form. A chapter follows as introduction then one on market drivers. Then we have a chapter on heavy industrial then light industrial and commercial. Buses and trucks and then taxis get chapters of their own followed by a close look at those three wheelers. Construction, agriculture and mining are the important topic covered in the next chapter with $10 billion plus giants such as Caterpillar and Komatsu converting to the technology for many reasons. That is followed by a close look at key components and then there is a selection of company profiles. 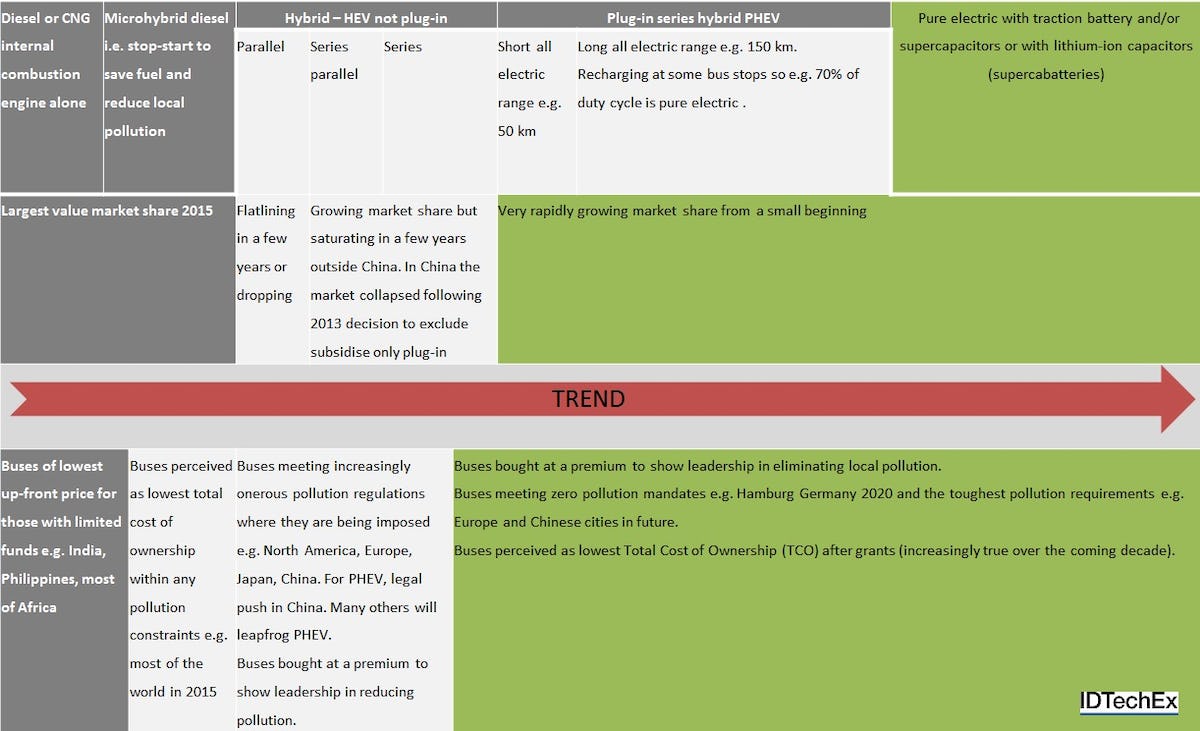 Market for conventional diesel buses, hybrid and pure electric buses > 8t by rationale, end game in green. Source: IDTechEx Research report Industrial and Commercial Electric Vehicles on Land 2016-2026.
The report explains how electric powertrains have been used in mobile machinery for a long time but most of the machines are still based on traditional diesel-mechanical or diesel-hydraulic transmission. Energy efficiency is improved with EVs. Lower maintenance costs and better controllability and drivability result. Due to the intensive use electrification results in a huge reduction in greenhouse gas and other pollutant emissions increasingly pushed by new regulations. Huge opportunities emerge for key components and systems such as energy storage, power electronics and motors.
Because the PhD level analysts are multilingual and intensely travel, much of this is primary research and all of it has new insights explaining why we will have 48V mild hybrid versions and energy independent vehicles added to this sector and why mobile robots will be hugely popular not least in agriculture. IDTechEx has staged conferences on these subjects from the vehicles to the enabling technologies for 15 years so the company is uniquely positioned to spot trends and distrust promises and claims where appropriate. For example, every component is changing and many mechanical, electronic and electric components of these vehicles are merging as new systems are added. It takes a cool head to make sense of this and spot the gaps in the market as well as the dead ends. Many other IDTechEx reports are referred to that permit the reader to drill down into each subsector as required, from range extenders to fuel cells, supercapacitors, future powertrains, energy independent vehicles and structural electronics in this context. All must be taken into account: the box-ticking extrapolations offered by some traditional analysts are grossly misleading now.
This report will interest all manufacturers of electric vehicles and their components and systems as they diversify into better sectors, achieve economy of sales, derisk earnings and participate in the consolidation of this fragmented industry, something also of interest to investors, government and service providers who will also find the report a vital guide.
For more see www.IDTechEx.com/icev.
PrintForwardTweetLikePinredditShare
Previous
Next