Sep 07, 2018 Dr Khasha Ghaffarzadeh
The need for flexible, transparent, ultrahigh performance, and low-cost barriers has long held back the promise of many flexible devices. Indeed, for long, it appeared as the grand challenge, and a potential showstopper. After nearly a decade and half of development, however, this challenge appeared overcome around 2014 when curved plastic OLED displays commercially adopted inline thin film encapsulation (TFE). As such, many pronounced the issue permanently resolved and declared all competing solutions obsolete.
This article will demonstrate that this conclusion is short-sighted. This is because we are only the beginning of the beginning of the commercialization trajectory. Indeed, high-performance TFEs and barrier films have so far only really been commercially employed in small-sized flat devices and are just about to reach their primary target markets: flexible devices.
Our report suggests that flexible devices will create new product categories - in displays, in lighting, and in photovoltaics- that will have lifecycles spanning decades, transforming the landscape of electronic products. In this long process flexible barrier technologies will have to become a ubiquitous, widely-available, and low-cost component in devices of all sizes, sensitivity levels, flexibility degrees, and so on.
Our report, Barrier Films and Thin Film Encapsulation for Flexible and/or Organic Electronics 2018-2028, provides a detailed assessment of all the emerging flexible barrier technologies including inline TFE, various roll-to-roll multi-layer barriers (R2R MLBs), single layer atomic layer deposition (ALD), and flexible glass. It includes detailed overviews of the key technologies as well as the key players in the industry worldwide. It also offers detailed application assessments, examining the market dynamics, commercial potential and technical challenges/requirements in markets such as plastic and/or flexible displays, quantum dot displays, OLED lighting, organic photovoltaics, flexible CIGS photovoltaics, and so on. It combines our deep understanding of the technology and the markets to produce ten-year market forecasts, in sqm and value, segmented by end use as well as technology. 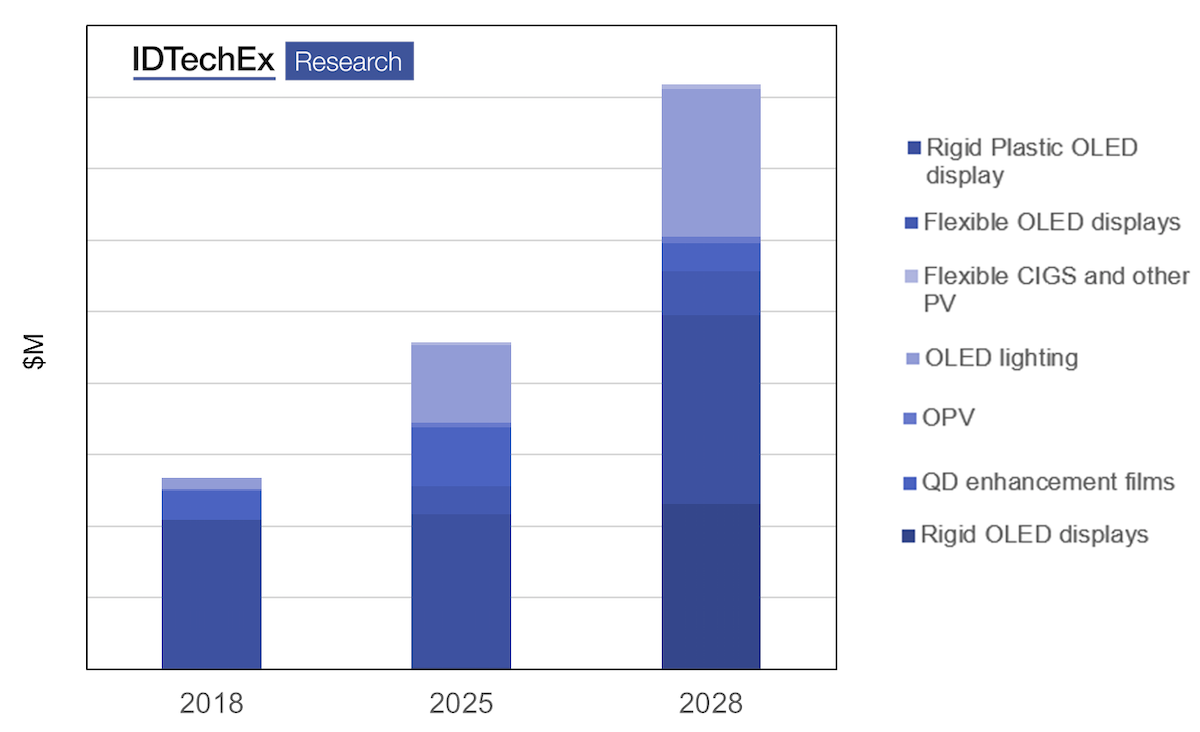 Market forecasts for barrier films and encapsulation- at the barrier or encapsulation level whether sold as a film or deposited inhouse- as a function year. Note that the shape of the figure- and relative contributions of each market- will look different when viewed on a sqm scale (vs $M scale), reflecting the wide difference in cost of production depending on barrier performance. For more information please refer to Barrier Films and Thin Film Encapsulation for Flexible and/or Organic Electronics 2018-2028 Source: IDTechEx

Curved, rigid and plastic OLED displays were commercialized around 2014. Here, the backplane is on PI (coated on glass, processed, then delaminated). These devices largely adopted inline TFE technology for top encapsulation although some companies explored a hybrid approach. Inline TFE was used because, compared to films, it eliminated the additional film and adhesives, leading to thinness and thus improved flexibility. The bottom barrier is just a relatively thick continuous inorganic layer (together with TFT and interconnect layers).
To make this technology viable, inline TFE was improved dramatically compared to its initial technology: PECVD and inkjet printing came to replace PVD and evaporation for the deposition of the inorganic and organic layers, respectively. This improved film quality, enabling makers to reduce the number of layers, thus further thinning the device.
Now inline TFE is the technology of choice for emerging small-sized bendable displays with bending radiuses at 2mm or lower. This is shown in the images below, showing that most makers now work on this technology. This technology is still a source of yield concern and questions remains as to how bendable they can become since bending strains might cause delamination. Furthermore, some are depositing the capacitive touch layers directly atop the TFE. This in-cell touch implementation itself will further reduce thinness but it requires compatibility with the barrier layer.
But has inline TFE technology reached a technological stalemate or are the materials and processes still evolving? What are the current drivers of innovation? What will be the market size, in sqm and value, in short-, medium- and long-terms? Will inline TFE be able to evolve to accommodate larger display devices, setting the scene for the adoption of larger sized plastic and flexible displays, or will it lose to MLB films in larger display formats? To learn more read Barrier Films and Thin Film Encapsulation for Flexible and/or Organic Electronics 2018-2028.

OLED lighting is another application requiring encapsulation. The challenges are significant: the devices are large area, the brightness levels are much higher than displays, and product lifetimes are longer than mobile phones and the like. Furthermore, the device is one big pixel as such defects can corrupt the entire panel and not just an isolated pixel.
OLED lighting holds significant promise. However, its rival, inorganic LEDs, arrived first and established a might price and performance gap. Indeed, matching this price reference is challenging, giving OLED lighting a target $/sqm cost far lower than displays.
Despite this OLED lighting is still making progress. Its scale up, in sheet-to-sheet (S2S) evaporated production, has reached Gen5 level. It benefits from synergies with displays in terms of material development. Ultimately, its key long-term differentiation is flexibility. As such, companies are today also offering curved lighting panels. They are mostly made S2S and then detached whilst some R2R manufacture directly on flexible substrates. These companies are exploring flexible glass (also as substrate), multilayer laminated barrier films, and even inline TFE. Here, the technology is more in flux and cost will have a major role in determining the ultimate winner.
But given the challenges will OLED lighting ever be commercialized? If so, what is the likely market size in short-, medium- and long-terms? Given the cost and size requirements, which technologies are being used now and which will win in the future? Who are the key players today? To find answers to these questions read Barrier Films and Thin Film Encapsulation for Flexible and/or Organic Electronics 2018-2028.

Organic photovoltaics (OPVs): will it even become commercial?

OPVs long had a seductive value proposition: R2R processing for organics using low-CapEx high-throughput equipment to achieve robust, flexible, and low cost solar cells.
Reality has been harsher so far. The first companies fanned the flames of hype to raise funds but struggle to raise efficiency and cut costs. In the process, they made many mistakes such as basing their production on an existing large-sized printer that could not be adopted and optimized.
In parallel, others took the patient approach of spending time to learn to process on pilot sized machine- be it solution processing or R2R evaporation- before recently embarking on scale-up which entails the development of custom equipment. This latter approach reflects the steep learning curve in processing OPVs and is more aligned with technical and commercial realities.
What is the past, present and future of OPV technology? Will OPVs ever become a commercial reality? If so, how large the market for barriers is likely to become? Who are the current players today and what is their production set-up? What barrier technology will win? To find answers to these questions refer to our report Barrier Films and Thin Film Encapsulation for Flexible and/or Organic Electronics 2018-2028.

Quantum dot (QD) enhancement films are a commercial success. Their main competitor- edge optic QD- is basically obsolete. In addition, a transition away from toxic Cd based QDs has taken place, thus lifting the legislative cloud of uncertainty from over the industry. This technology therefore represents an existing market for mid performance barrier films.
But there are many questions abound: will continued improvements in QD air stability relax barrier performance requirements, thus shrinking the market in value terms? QD displays will grow but can film-type integration keep its monopoly, or will it be replaced by other approaches such as color filter or on-chip type QDs? In total, how large will the market be in sqm and value terms? Who are the key players today? To find answers read Barrier Films and Thin Film Encapsulation for Flexible and/or Organic Electronics 2018-2028.

There are several other applications of flexible barrier films including other flexible photovoltaics, such as CIGS and flexible electrophoretic displays. These applications have very different requirements to displays and lighting, and as such will require different barrier solutions. Read our report to learn about the status of these applications and understand barrier uses/trends.
In summary, TFE and barriers are already a commercial reality after years of a decade and half of development. This, in our view, however is only the beginning of the beginning of the commercialization trajectory. This is because TFE have so far only really been commercially employed in flat devices and are only about to reach their main markets: flexible display, lighting and photovoltaic devices. These flexible devices will create enormous market opportunities spanning decades, and in the process will drive the market growth and technological change of barrier films and TFEs.
PrintForwardTweetLikePinredditShare
Previous
Next