Aug 12, 2015 Dr Khasha Ghaffarzadeh
Core applications of PV and touch panels continue to grow demand, but new opportunities emerge in the form of wearable technology, circuit boards and structural electronics.
The new IDTechEx Research report Conductive Ink Markets 2015-2025: Forecasts, Technologies, Players finds that the market for conductive inks and pastes will reach $2.8bn in 2020, and thereafter $3bn in 2025. This report is the result of our close engagement with the conductive ink suppliers and users over the past ten years.

Growth is back in the PV sector

The photovoltaic market has traditionally dominated the conductive paste market. Here, firing type silver pastes are screen printed atop billions of photovoltaic silicon wafers. The PV market experienced a drastic consolidation period between 2007 and 2014, causing the paste market to dip and also to consolidate. Growth is however now back in the underlying PV sector, causing volume demand to grow despite the gradual annual decline in silver content per wafer. The previous big boys dominate sales although there is now renewed friction on the top with heightened risk of IP battles.

The touch screen market is growing even though the uptake of large-sized touch has lagged expectation. Here, low temperature silver pastes are screen printed as the edge electrodes. A big trend is towards narrowing the bezel even more in order to make thinner bezels around screens which consumers desire. This trend will ultimately push screen printing beyond its limits in the long term and will open door for other printing methods.
There is also continued pressure to switch to copper based inks to reduce cost. Here, the suppliers want to offer the same for less. There has been tremendous effort but copper is far behind silver in its technology learning curve therefore technical challenges still need to be ironed out. However, IDTechEx expects that the rising sales figures for innovative sintering machines (machines that prevent copper oxidization) to finally open the door for the flow of copper sales. This is a space to closely watch.
These two applications make up the majority share of the conductive ink and paste market today, as shown in the chart below. 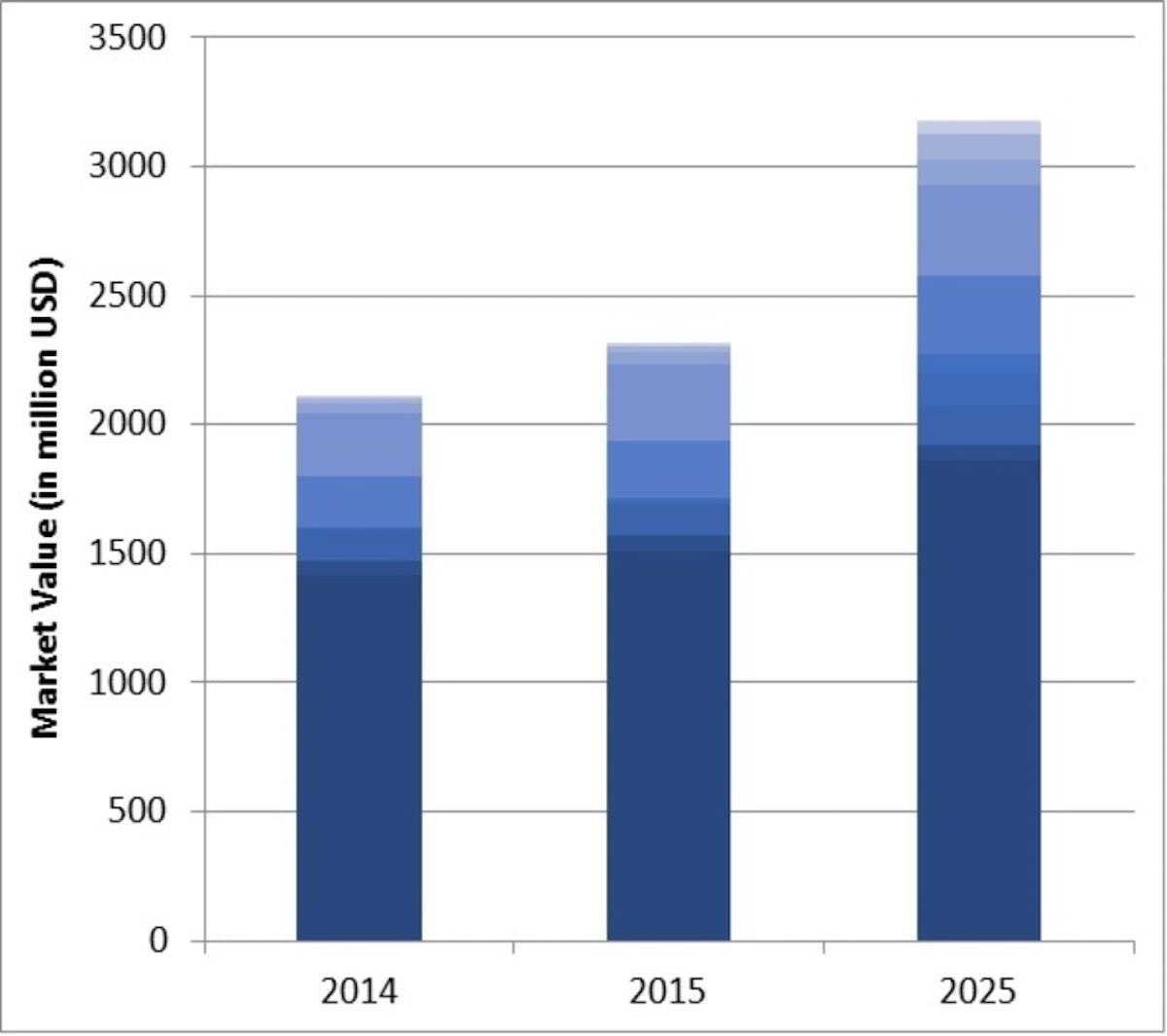 >Market for conductive inks and pastes between 2014 and 2025. The data is from the IDTechEx Research report on Conductive Ink Markets 2015-2025: Forecasts, Technologies, Players<

The market for silver nanoparticles remain small but the mood is changing. Larger companies have entered the scene, helping change a landscape previously in exclusive possession of small players. Many firms have left the scene but most have been replaced with fresh stock.
Silver nanoparticles initially set out to offer more for less compared to traditional pastes but they turned out to be less for more. There is now however a sense that they finally offer more for same. The prices have fallen but $/kg manufacturing cost will always remain many times higher due to the need to keep the nanoparticles de-aggregated throughout the chemical growth process.
The $/Kg will matter less, however, when you need less material. This is why higher silver prices would have certainly accelerated the uptake as it would force a more efficient use of silver. We feel that there is a robust and diverse application pipeline emerging, and success in one will transform the fortune of the industry. These are critical years for this industry as suppliers seek to evolve out of custom development work with select customers to large scale volume sales.

A range of emerging application now capture all the attention. We will briefly discuss each in turn here. For more details please email us or refer to our report Conductive Ink Markets 2015-2025: Forecasts, Technologies, Players

Wearable electronics is now trending and so the topic is on all suppliers' agenda including conductive ink ones. Many detect an opportunity in creating speciality inks that can be washed and stretched. The idea is that the printed inks can act either as an interconnect or a piezoresistive sensor on textiles.
We are at the beginning of the beginning. At this stage, we witness many electronic-on-textile product concepts being quickly prototyped and marketed by nimble, small players. Many suppliers now set up partnerships with these small players to test out the markets. This sector is however far from mature and inks suppliers need to change formulation so their inks survive tough washing, stretching and adhesion tests. The race is on but all ink suppliers are keen to enable e-textile possibilities.

Using printing to rapidly prototype PCBs is being given a second chance. This time the market is emerging at two extreme ends: the hobbyist as well as the professional. In the former, small and simple machines create crude and simple (single and rarely double sided) circuits with low conductivity and wide tracks (e.g. 500 um). These machine makers raise money using crowd funding and price their products at the low end. We expect this trend to soon fizzle out because the incumbent, a low priced CNC machine, offers much more for less so chances are that the substitute will not succeed. The consumable costs for printing will be a further handicap as will be their inability to cost effectively create a continuous ground plane.
The professional end is a different story. Here, complex inkjet printing systems are being engineered that can deposit alternating layers of silver nanoparticle and insulting inks, thereby creating multi-layer PCBs with narrow tracks compatible with most SMDs. The target market here is rapid prototyping or low volume manufacture of boards with 4 layers or higher (etching PCBs gets more tricky with increasing layer numbers). This approach seeks to reduce prototyping turnaround time for multi-layer circuits and enable keeping all the circuit IP in house.
The value proposition seems strong but major question marks remain. The printed PCB may not have the same high frequency behaviour as the etched one. The turnaround time issue is only acute for 5 layers or more, and most importantly the technology itself is not yet market ready and we can verify if it will do what it says in the tin. 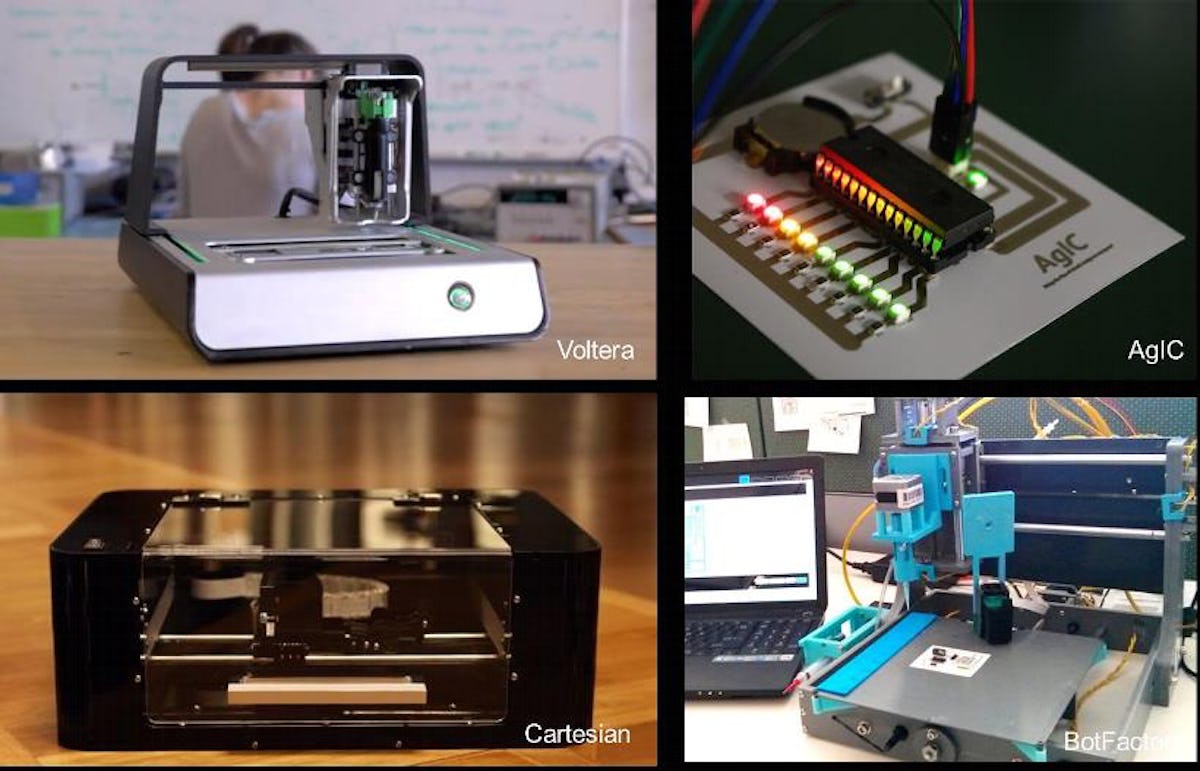 IDTechEx Research now also detects a trend towards combining printed electronics and 3D printing. The idea is to weave electronics into 3D printed objects. Various approaches are being developed in parallel. Conductive filaments are improving but they remain barely conductive, not even coming close to levels that enable useful circuits. Aerosol deposition is making good progress but it is at its best for depositing on the final surface. Standard printed conductive inks have a high sintering temperature, often above the glass temperature of 3D plastic whilst UV curing can have many side effects on polymer properties. So... different approaches, all with world to be done. These are also covered in the report From 2D to 3D Printed Electronics 2015-2025.

Molded electronics is a subset of structural electronics, a grand trend that sees electronics disappear into body of objects (see Structural Electronics 2015-2025: Applications, Technologies, Forecasts). Here, the idea is to put in the electronics on plastic films so they can be molded or thermoformed into 3D shapes. This way the electronics is part of object and not an extension of it.
This approach is best for manufacturing high volume but low complexity circuits. Indeed, molded electronics was once on the cusp of a fantastic success story when it was used to create a thin and sleek car overhead controller. Sadly Ford pulled back the parts soon after its launch.
The sector is not dead however and we expect it to make a comeback soon. The material armory is expanding. Here too the ink technology is still not mature as inks have to withstand thermoforming and extreme stretching conditions, there are therefore problems to solve but the big marketing challenge will ultimately be developing applications that steer well away from simple low-cost mechanical switches. 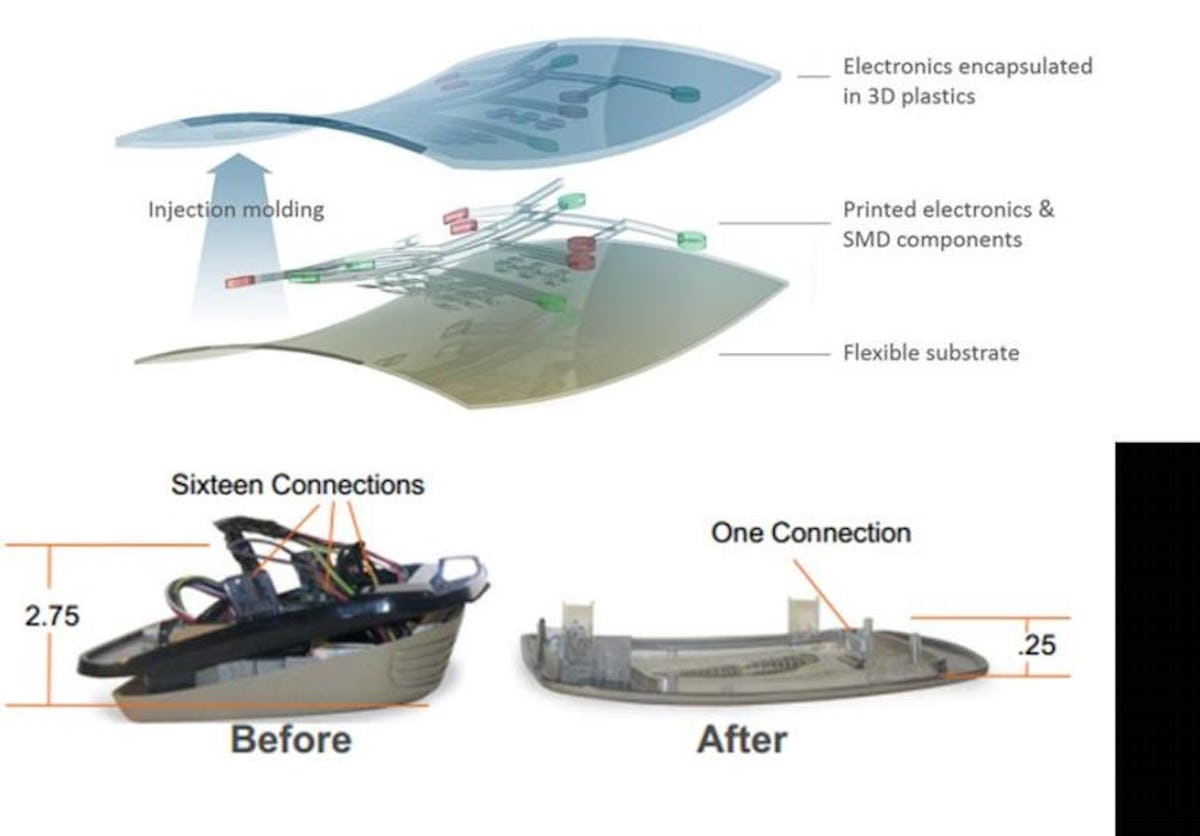 Source: Tacotek, T-Ink
The conductive ink and paste remains one of the largest and most dynamic sectors in printed electronics. It is often perceived that this technology is old hat, but the industry keeps itself very dynamic by offering new products and by findings new markets. The technology is not stale even in the more mature sectors like PV as here too cut-throat competition is pushing through rapid incremental product improvements. The strong pipeline of newly emerging market outlets also creates new requirements and opportunities. Next generation technologies like copper or nano inks also progress as the existing incumbent paste technologies are thought to soon plateau, although they so far always managed to stay ahead of the game.
The IDTechEx report on Conductive Ink Markets 2015-2025: Forecasts, Technologies, Players will help you assess how the conductive ink/paste technologies compare and will evolve, how the different players are positioned, and how each market will grow in the future. The world's largest event printed electronics - Printed Electronics USA, held on November 18-19 will cover the technologies and applications in questions. See www.PrintedElectronicsUSA.com

for more details.
PrintForwardTweetLikePinredditShare
Previous
Next