May 01, 2015 Ms Rachel Gordon
Each year IDTechEx recognises and rewards outstanding achievement of those involved in the rapidly growing industries they cover. For the first time, IDTechEx are including 3D Printing Europe Awards, which were announced at IDTechEx Show! on 28th April in Berlin.
The awards recognise exceptional progress in the development and commercialisation of equipment, materials and applications for 3D printing. The industry produces a huge amount of technical innovation and is now being widely adopted. The entries were judged by IDTechEx director, Dr Jon Harrop.
Best Development in 3D Printing Equipment has been awarded to Nano Dimension. Nano Dimension is developing a 3D printing system for rapid prototyping of professional multi-layer PCBs (circuit boards). The company is developing technologies in 3 areas, nano-materials, the 3D printer itself and software dedicated to 3D printing. The printer is designed to print the conductive material, the insulating material and to do so layer by layer. As a result the printer will produce, by additive manufacturing, complete multi-layer PCBs. The process includes printing the interconnections such as blind and buried vias as well as through-holes. In order to print the sub 100 Micron conductive traces of the PCB pattern the printer employs in-house developed software to generate 3D printable files from standard 2D PCB design files. The proprietary nano-silver particle ink provides highly conductive traces and the jettable epoxy creates a solid dielectric structure. 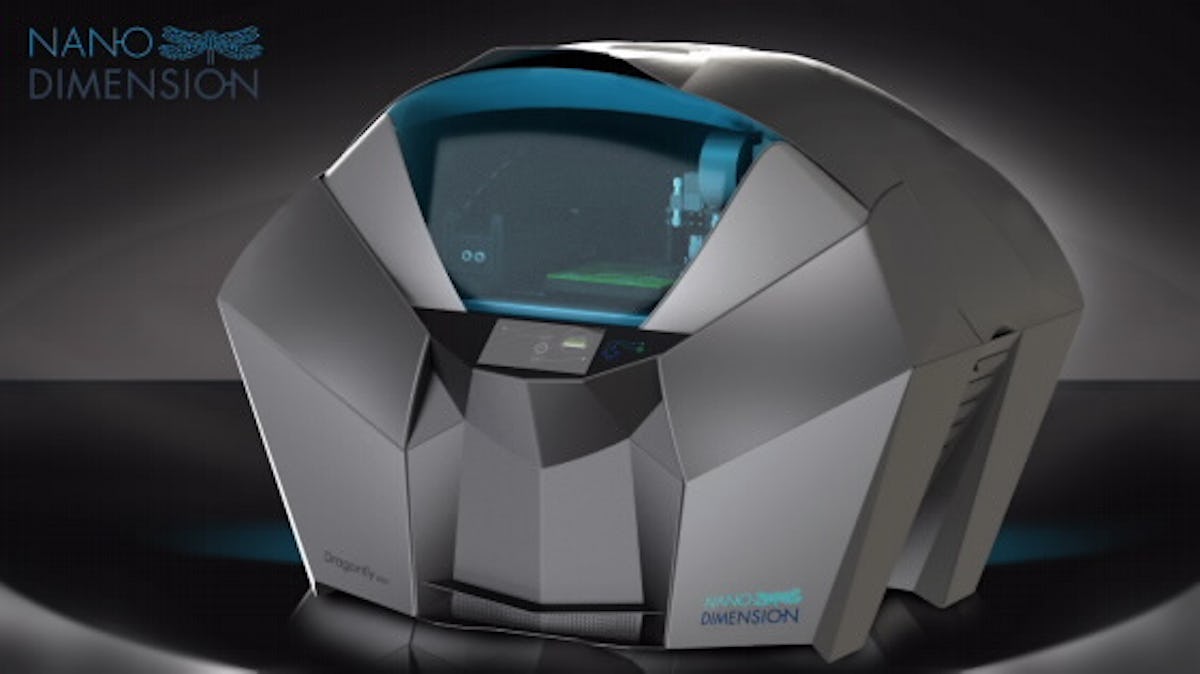 Image: Nano Dimension's Dragonfly 2020
When asked about the reasons for his decision, Dr Jon Harrop explained: "Nano Dimension are at the forefront of 3D printed electronics, a disruptive technology that will literally reshape the $100bn PCB industry. The Dragonfly 2020 is the only professional-quality 3D printer coming to market in 2015 that is capable of prototyping the most common multilayer PCB designs. With a huge addressable market and a green field with no direct competitors, Nano Dimension are positioned to become world leader in this rapidly growing market." 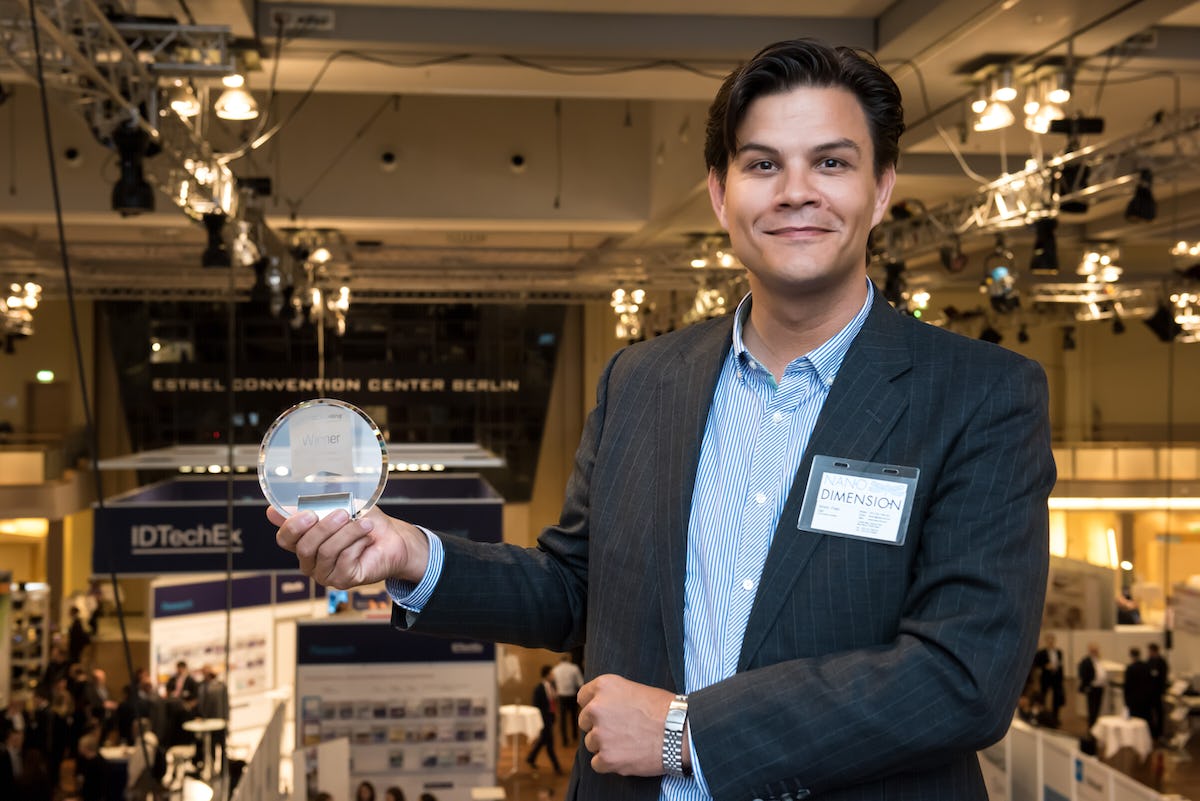 Simon Fried, Director of Business Development, Nano Dimension
IDTechEx are excited to award the Best Development in Materials for 3D Printing to Better Future Factory. The problem of plastic waste is increasing constantly. 90% of plastic waste isn't recovered. Better Future Factory's recycled filaments are not highly specific in terms of functionality, but around 70% of 3D prints use standard filaments. They have secured high quality supplies of source materials and processes that consequentially produce high end filaments in terms of quality and properties. Tolerances are kept low, roundness is high (> 95%), and the temperature range is similar. They have experimented with a range of recycled plastic waste streams, connected expert polymer recycling knowledge, and developed an EU-certified Reach and RoHs supply chain. Allocating specific but high quality waste streams is key; including monostreams of car dashboards, refrigerator insides and old PET bottles.
In terms of materials, ABS is already commonly used in 3D printing. ReFil has it currently available in black and a 100% recycled, while their 90% recycled PET is a transparent filament that is unique to the current market. The ReFil filament portfolio is constantly being diversified by allocating more highly specific waste streams and adding colouring. 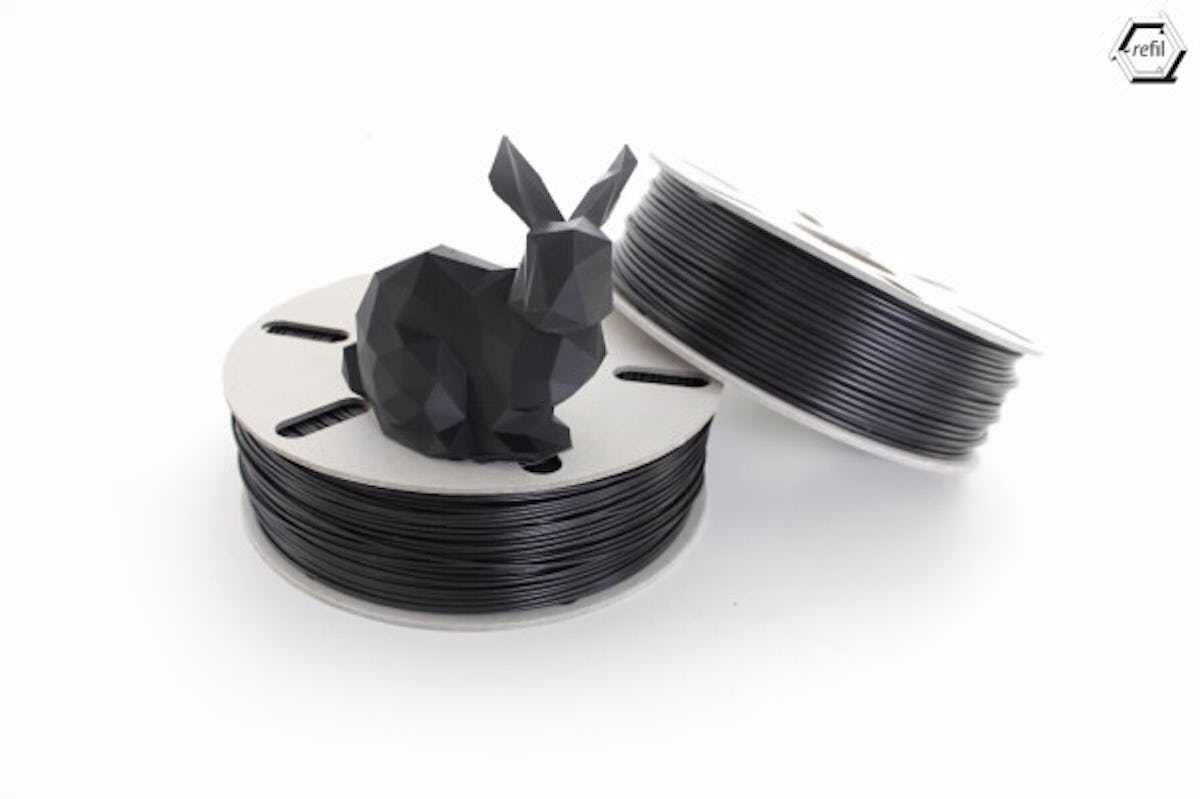 Image: Rabbit printed in ReFil
Jon Harrop explained his decision saying: "The thermoplastics used by the majority of the world's 3D printers can potentially be obtained from many different places including milk bottles, plastic cups and even the insides of refrigerators. 3D printing promised the dream of less waste. Better Future Factory are making this dream a reality with their Perpetual Plastic Project, turning plastic waste into almost anything by using recyclers and 3D printers." 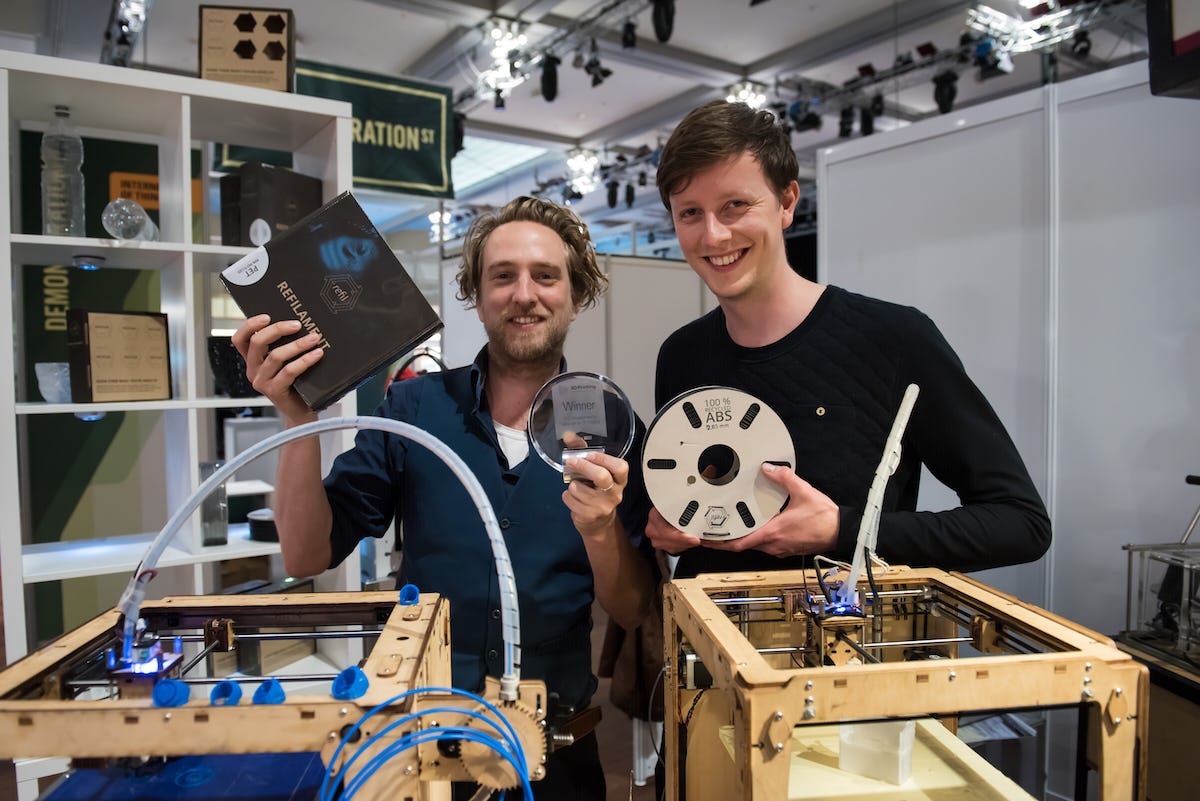 Jonas Martens, Captain and Bart Bleijerveld, Chief Cook, Better Future Factory
The Most Successful Application of 3D Printing has been awarded to 3Dponics. 3Dponics is the creator of the first 3D-printable hydroponics system, made up of 3D-printed components, empty plastic bottles and a basic aquarium air pump. Since successfully completing their Kickstarter campaign in summer 2014, they have been encouraging educators, students, parents, 3D-printing enthusiasts and urban farmers to build their own indoor gardens, grow fresh, healthy food, and create more parts and upgrades for the 3Dponics system. 3Dponics is completely open source. The digital files are free to download across multiple platforms and everyone is encouraged to engage and innovate in the growing 3Dponics community.
Jon Harrop explained: "Billions of people are pushing for better STEM education and 3D printing has the potential to be a major tool for teaching science, technology, engineering and even mathematics. Few companies have done as much to harness 3D printing for this purpose as 3Dponics. Their hydroponics system is easily 3D printed at home or at school and is a fascinating, fun and educational project in its own right, allowing people to learn about biology without even realising the crucial role that 3D printing plays." 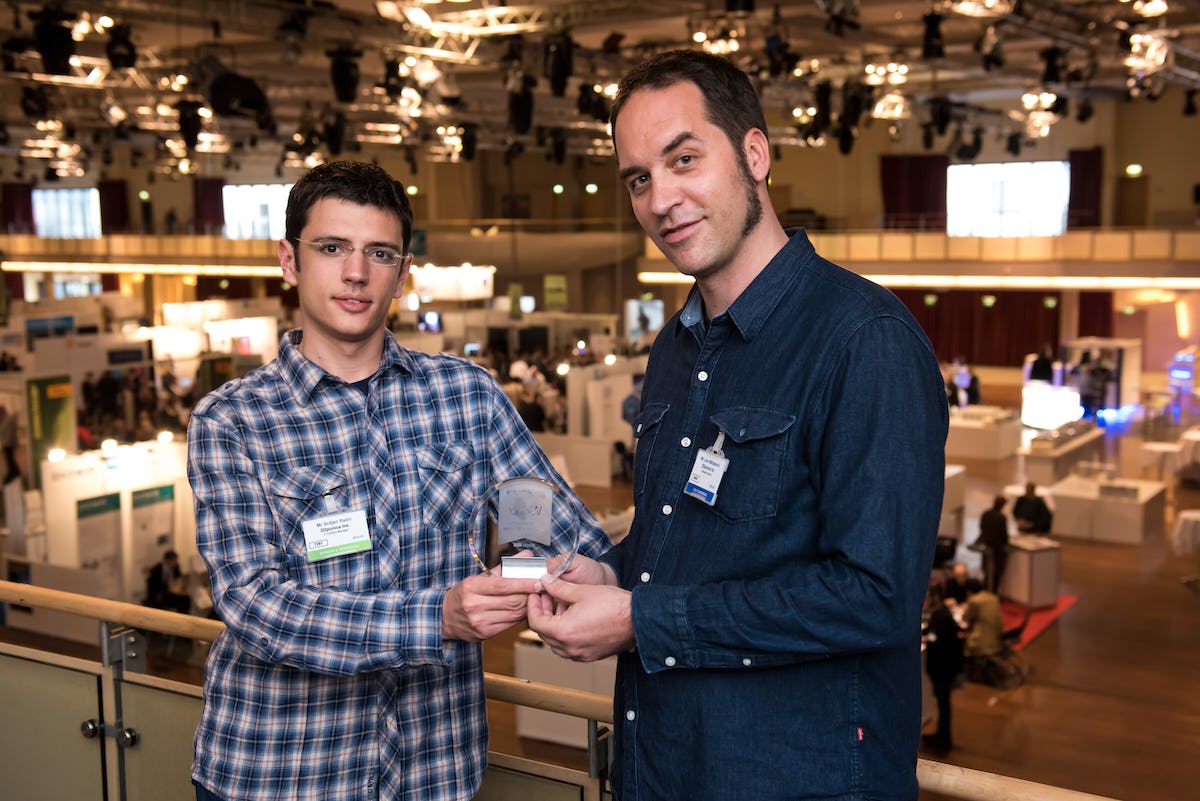 Srdjan Radic, R&D Manager and Luka Matijasevic, Managing Director, 3Dponics
The next IDTechEx awards will be presented at the IDTechEx Show! in Santa Clara, California, USA on November 18, 2015. For more information, visit http://www.idtechex.com/3d-printing-live-usa/home.asp
PrintForwardTweetLikePinredditShare
Previous
Next