ITO alternatives: light at the end of the tunnel

ITO alternatives: light at the end of the tunnel

Is the end of the downturn in sight?

The TCF industry has recently experienced sluggish growth. The industry has transitioned from being supply-limited to being commoditized and demand-limited with supply currently outstripping demand. This is a commonplace characteristic of supply industry into consumer electronic devices: there is often a scramble for supplies as demand rapidly takes off but the industry soon over-invests, the capacity overshoots demand, and competition renders the component a commodity.
Faced with the threat of alternatives and increased supply, the incumbents decided to protect their market share by slashing their prices. There were willing to reduce prices every time they sensed they were about to lose business. This caused a precipitous fall in film price from $30-35/sqm only a few years ago to now $15-17/sqm. This has upended the previously more-for-less value proposition of some alternative technologies.
As we predicted in the IDTechEx Research report, Transparent Conductive Films 2016-2026: Forecasts, Markets, Technologies this has triggered a consolidation period, adversely affecting existing ITO film manufactures as well as alternative suppliers. This process has begun to take its high-profile victims but will have likely reached near the end of its usefulness as price falls are likely to have largely plateaued.

ITO alternatives are here to stay

The ITO alternative landscape has for long been too technologically crowded. Metal mesh and silver nanowires (despite the recent setbacks) have emerged as the leading alternatives. They have raised the performance bar in the market. They are positioned as sustaining technologies in that they further the performance of TCFs along well-established figures-of-merit.
The challenge has been that the incumbent has proven good enough and thus hard to displace in most existing applications therefore alternatives are having to patiently wait for the emergence of new application areas such as large-area touch, flexible applications, etc. The value chain as well as the business case for many of these applications is finally coming together, opening the door for new TCF technologies.
Other alternatives now seek niche markets where their non-traditional figures-of-merit such as ultra-flexibility or stretchability count. In particular, 3D-shaped touch-sensing surfaces are emerging a market opportunity for TCF technologies that can be deposited flat and then thermoformed/moulded into a 3D shape.

The return of exciting times

Despite the recent setbacks, IDTechEx Research report Transparent Conductive Films 2016-2026: Forecasts, Markets, Technologies assesses that ITO alternatives are here to stay. They have matured as technologies and have already begun market penetration. Specific companies may come and go but the technologies will achieve market growth after a healthy period of valuation correction.
Indeed, IDTechEx Research report Transparent Conductive Films 2016-2026: Forecasts, Markets, Technologies projects that ITO alternatives will sell more than $220m in 2026 based on the latest and our projected film prices, thus achieving a 10-year CAGR for nearly 40%. We anticipate that nearly 65% of the growth will stem from applications which today make up only 3% of overall TCF/G sales.
These figures point to an industry that is on the cusp of major change. Established application areas will only experience small and incremental changes both in terms of sales and technology compositions. In fact, the three primary well-established applications are projected to register a measly 2.8% 10-year CAGR. This does not herald good news for the incumbent suppliers. In contrast, today's nascent applications areas are projected to achieve an exciting 42% 10-year CAGR. 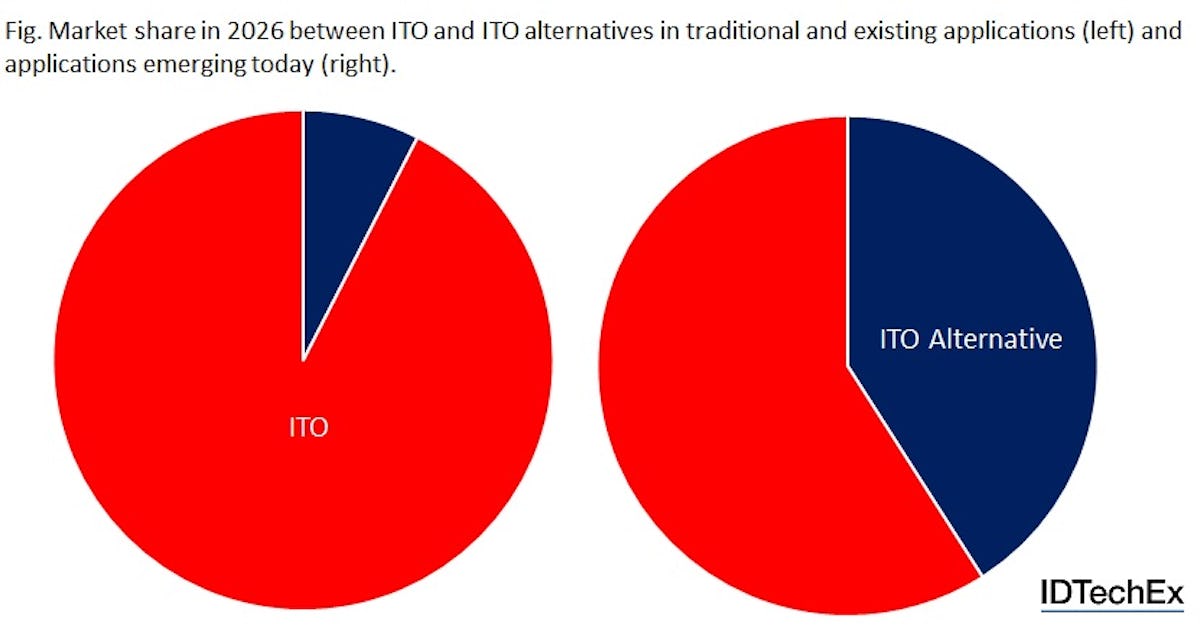 These pie charts show that ITO will retain its dominance in existing applications whilst it will be a closer market share competition for emerging applications. Source: IDTechEx Research "Transparent Conductive Films 2016-2026: Forecasts, Markets, Technologies" (www.IDTechEx.com/tcf).
For more information visit www.IDTechEx.com/tcf.
PrintForwardTweetLikePinredditShare
Previous
Next