The Challenges of the World's Largest Electric Vehicle Market

The Challenges of the World's Largest Electric Vehicle Market

Aug 04, 2021 Luke Gear
China's electric two-wheeler market is the largest electric vehicle market in the world. Some 29.66 million were produced in 2020 (with sales typically at over 98% of production). Today, however, the market is no longer seeing the explosive growth of the past, the IDTechEx report "Electric Two-wheelers 2021-2041" finds.
In 2016, after growing at a rate of 24% CAGR since 2002, China's electric two-wheeler market peaked at around 32 million. There are multiple factors at play, but perhaps the greatest is the rise of the passenger car, the ultimate mobility preference as consumer purchasing power has increased.
Another major cause is road safety. Since the market's origins, China's regulation has limited electric two-wheeler speeds, but in practice, this was not enforced. Demand for performance from riders resulted in it being common to illegally disconnect motor controllers, the device limiting two-wheeler speeds.
This allowed speeds of up to 40kmph with two-wheelers weighing over 70kg, all whilst being ridden and treated like a bicycle. The result was a massive wave of safety incidents and fatalities, causing many Tier 1 cities in China to ban electric two-wheelers outright or in central locations. 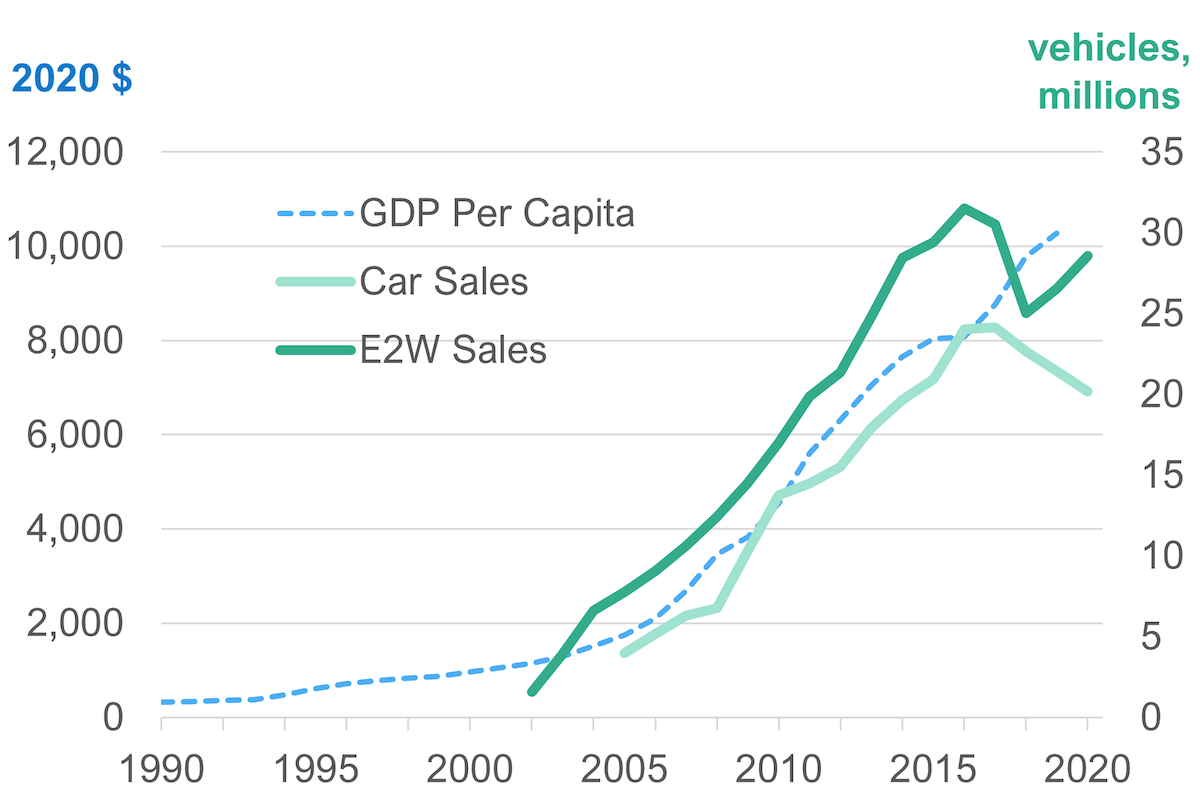 Correlation between individuals' wealth (blue) and electric two-wheeler and car popularity (green) in China. Data sources: World Bank, CAAM, MIIT, IDTechEx
China has also been grappling with a reliance on lead-acid batteries, where up to 80% of toxic waste from lead-acid batteries (from electric vehicle markets) is unaccounted for. In April 2019, China finally brought in a new standard for electric two-wheelers to both close loopholes compromising safety and transition away from lead-acid batteries. The new regulation brought in measures for motor controller tamper resistance, and two-wheelers not meeting the specification must now be registered as a motorcycle.
While the share of Li-ion batteries in two-wheelers was under 1% in 2010, in 2020 it was close to 20%. IDTechEx expects this to continue to at least 50% by 2025 as Li-ion production increases and costs fall. 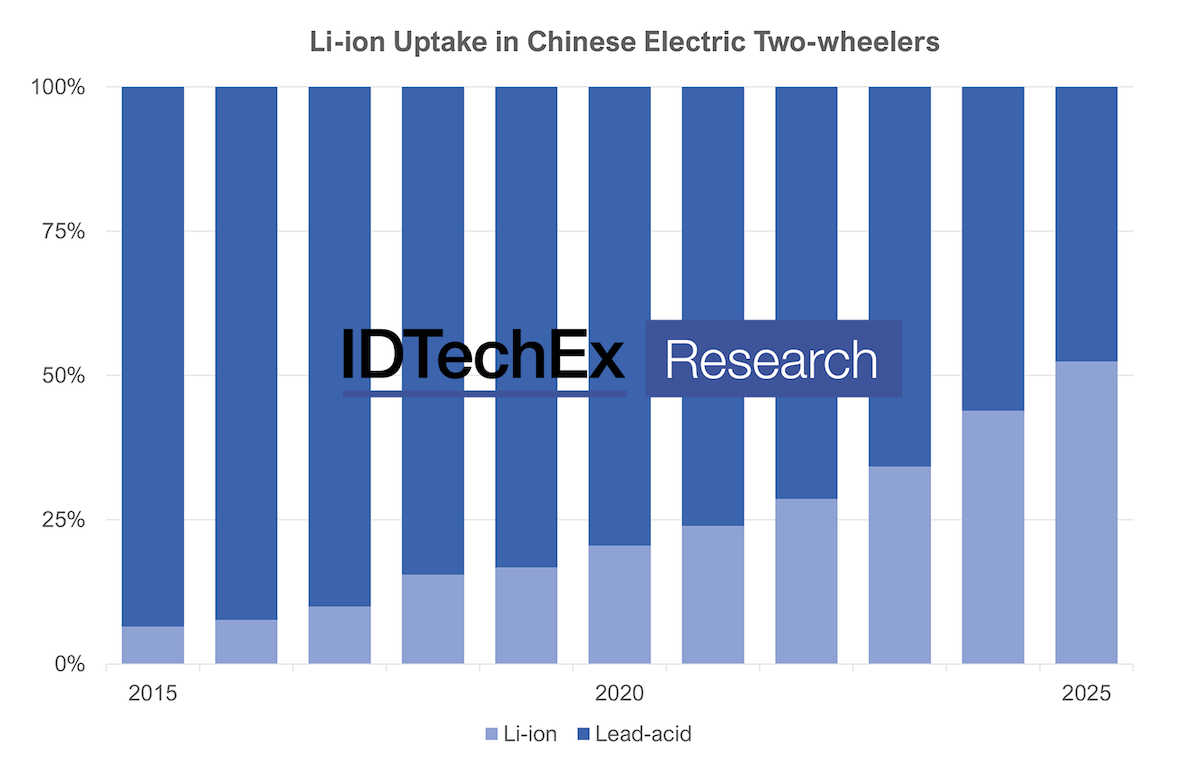 Data sources: MIIT, China Bicycle Association, IDTechEx
Moreover, an interesting mix of chemistries is helping to facilitate this transition. The usual suspects - Lithium Iron Phosphate (LFP) and Lithium Nickel Manganese Cobalt Oxide (NMC) - are supplied, but unlike any other electric vehicle market, variants of Lithium Manganese Oxide (LMO), which have a good balance of performance and cost, play a large role.
To learn more, the IDTechEx report "Electric Two-wheelers 2021-2041" addresses and forecasts electric two-wheelers with pure electric modes by power class (under 4kW, over 4kW) with historic data back to 2015 and forecasts to 2041, and insight into the drivers and uptake by region (China, India, Indonesia, Vietnam, EU + UK, US, RoW).
The report further explores key technology trends, such as the transition away from lead-acid and the reliance on permanent magnet motors for all power classes. Market shares of companies are provided regionally, based on primary interviews with market leaders. For more information please visit www.IDTechEx.com/E2W.

This research forms part of the broader electric vehicle and energy storage portfolio from IDTechEx, who track the adoption of electric vehicles, battery trends, and demand across land, sea and air, helping you navigate whatever may be ahead. Find out more at www.IDTechEx.com/Research/EV.
PrintForwardTweetLikePinredditShare
Previous
Next