Jul 20, 2015
At IDTechEx we have invited a number of leading players in the graphene industry to write opinion pieces, reflecting on their products, latest research, market insight, and commercialisation experience. We will be releasing these articles over the next few weeks.
This article is by Dr Paolo Bondavalli of Thales Group and Dr Gregory Pognon. Dr Bondavalli is the Head of Nanomaterials Group at Thales. His group has obtained promising results on graphene in supercapacitors.
To learn more about the industry, please refer to our report Graphene and 2D Materials: Markets, Technologies, and Opportunities 2015-2025
The supercapacitors are extremely interesting devices for a large panel of applications where it is necessary to deliver quite large amount of energy in a very short lapse of time. We can mention security issues for airplanes, electric vehicles, wind turbine pitch, backup power solutions, energy storage for autonomous sensors and many other potential applications. One of the advantages of non-faradic supercapacitors, where non-faradic means that there are no redox reactions and so exchange of matter between the electrolyte and the electrodes, is that they have very large charge and discharge cycles (more than 500000) compared to batteries (10000 at maximum). The main drawback is the quantity of energy stored considering that commercial supercapacitors show usually a specific energy (energy stored as function of the weight) of 6Wh/Kg compared to batteries that can reach 30Wh/Kg. The emergency of new nanomaterials as graphene has focused the attention of many scientists and companies on the potential performance enhancement using these new materials. Nanomaterials could allow storing more energy in supercapacitors thanks to the fabrication of highly mesoporous electrodes (1,2). Indeed in order to store energy is necessary that the charges in the electrolyte could access all the surface of the electrode. Considering that the dimensions of the charges are between 2 and 50nm, the electrodes having a sponge structure with pore dimensions in this interval are extremely good for charge and so energy storage, but also to deliver the charge very quickly (and so to increase the power). In case of commercial supercapacitors, activated carbon is employed. However, even if this material is extremely cheap, only one third of the pores are accessible to the charges and so the performances are limited.

Another advantage of nanomaterials is the possibility for developing a new thin-film based technology that can be easily integrated with existing systems. In this context the position of the Nanomaterial Team at Thales Research and Technology, which is the central research laboratory of Thales and the technology provider of the group, has been from the beginning to exploit our strong background in carbon nanomaterials and to develop a new generation of supercapacitor based electrodes using existing technological bricks. Therefore we have decided of not developing or produce nanomaterials (too expensive), that we can already find in the market from trusted suppliers working with us in the Graphene Flagship, but to work on an original method to fabricate the devices. Indeed we have developed a new fabrication technique based on dynamic air-brush deposition. This technique is based on the deposition of nanomaterials previously put into stable suspensions in specific solvents. The supercap collector, where the nanomaterials are deposited, is heated at the boiling point of the solvent in order to avoid the so-called "coffee ring" effect. Indeed the nanomaterials in the liquid drops after being deposited tend to move on the edges of the drop creating sort of circular patterns. To avoid this effect, we need to heat the substrate to obtain the immediate evaporation of the drops when they reach the collector. In this way the nanomaterials will be fixed on their impact zone. This technique patented by Thales has been developed to fabricate successfully Carbon Nanotubes (CNTs) mat for gas sensors. It allows the fabrication of extremely uniform and finely tuned mats of nanomaterials with thickness from some nanometers to tens of µm. One of the competing techniques to achieve supercap electrodes is the fabrication of bucky papers, which are sort of compressed mats of nanomaterials. The advantages of our technique are mainly three: the better mesoporous distribution of the electrodes (more energy can be stored and also easily delivered), the IP which is owned by our company (five patents in the field of supercapacitors) and the fact that our method is industrially implementable considering that it easily deployable and compatible with large surface fabrication (potential for low cost fabrication). For this reason our technique has been implemented for the fabrication of electrodes for supercapacitors using mixtures of Graphene Oxide (GO) and oxidized CNTs (ox-CNTs). Indeed using these nanomaterials allows obtaining stable suspensions in simple water. In this way, these mixtures are sprayed on the collector using a friendly solvent compared to N-Methyl-Pyrrolidone, usually used for graphene based suspensions, which is highly toxic. Moreover, GO suspensions in water are more stable (more than one year) than graphene suspensions in NMP where graphene flakes tends to restack themselves only after some weeks. Comparing the performances of bucky paper based electrodes with those fabricated using spray gun technique we observe a huge increase in capacitance performances, at less by a factor 3, and also a good behavior also at high charge speed (see Fig.1). 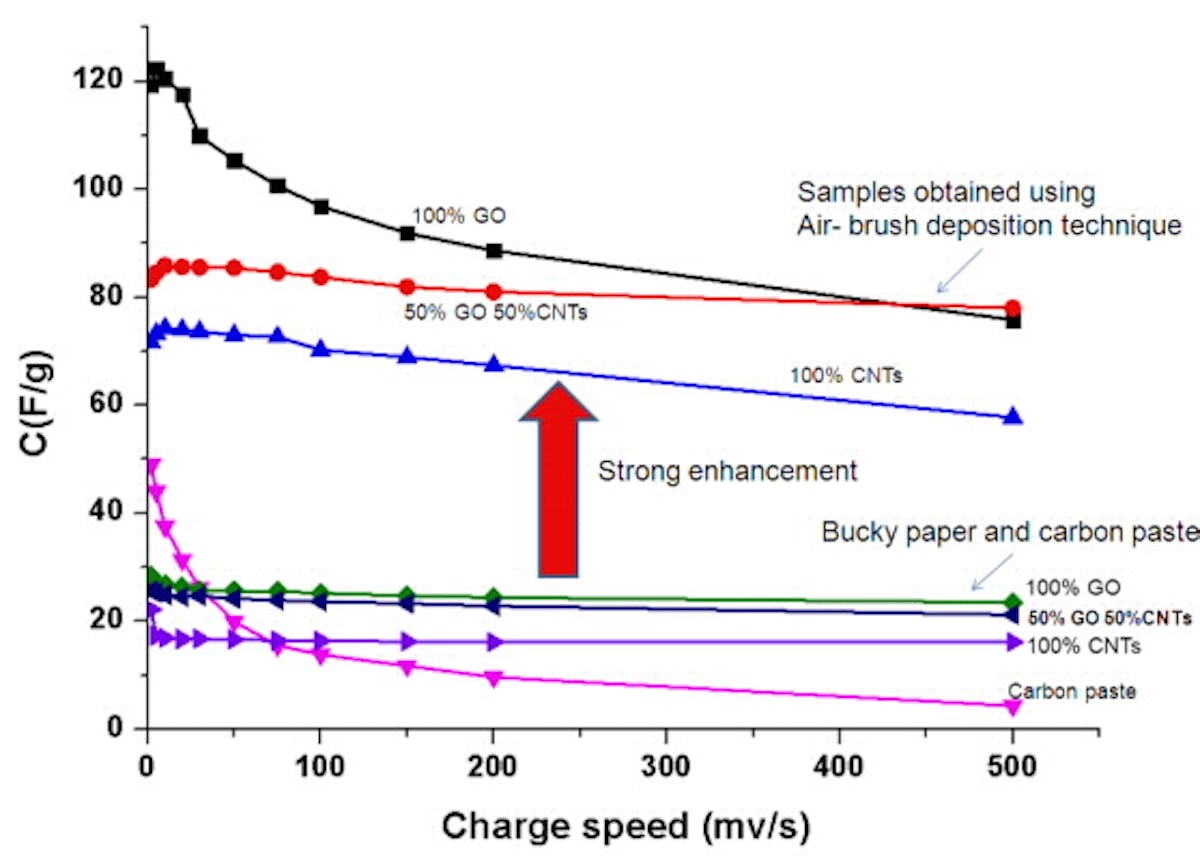 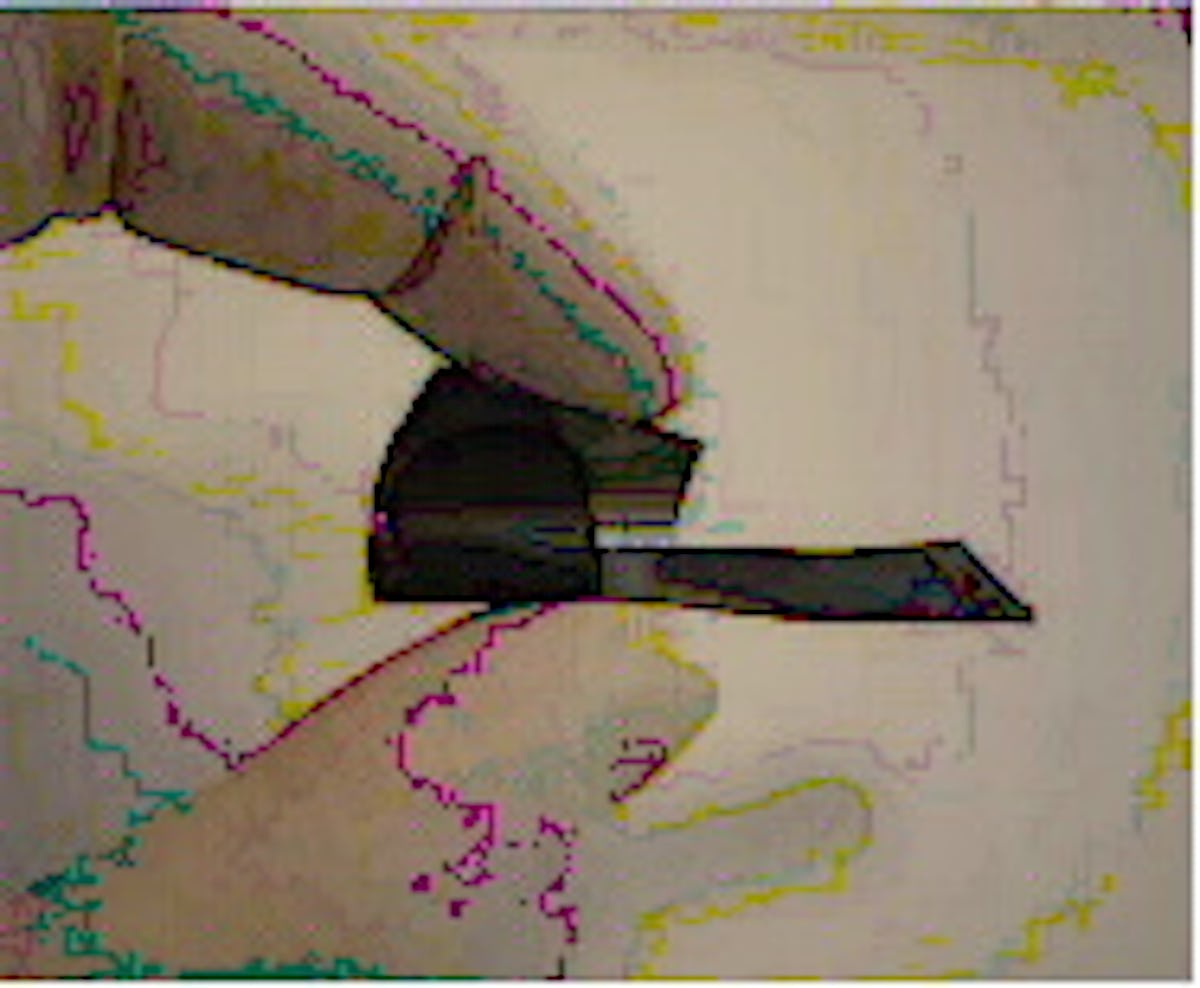 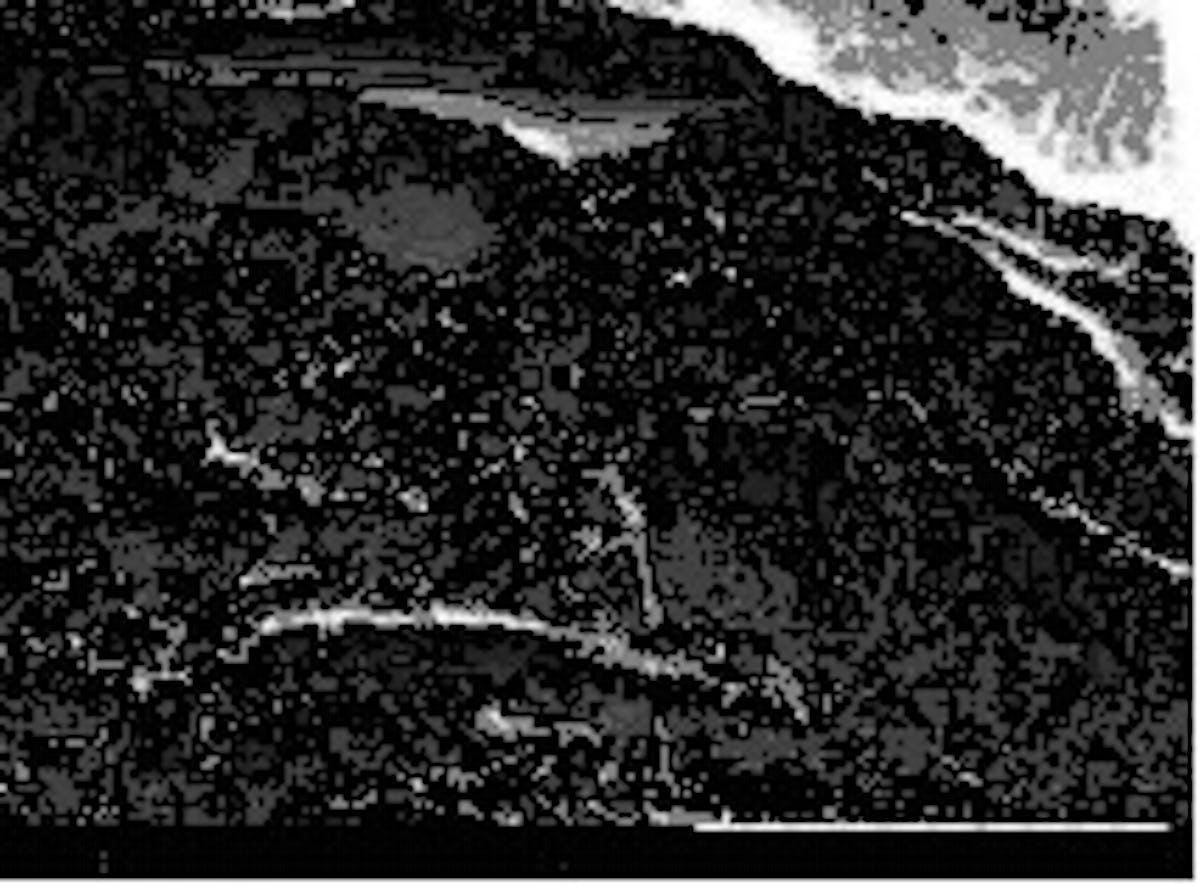 Fig 2: a detail of an electrodes obtained mixing graphene based materials and CNTs. 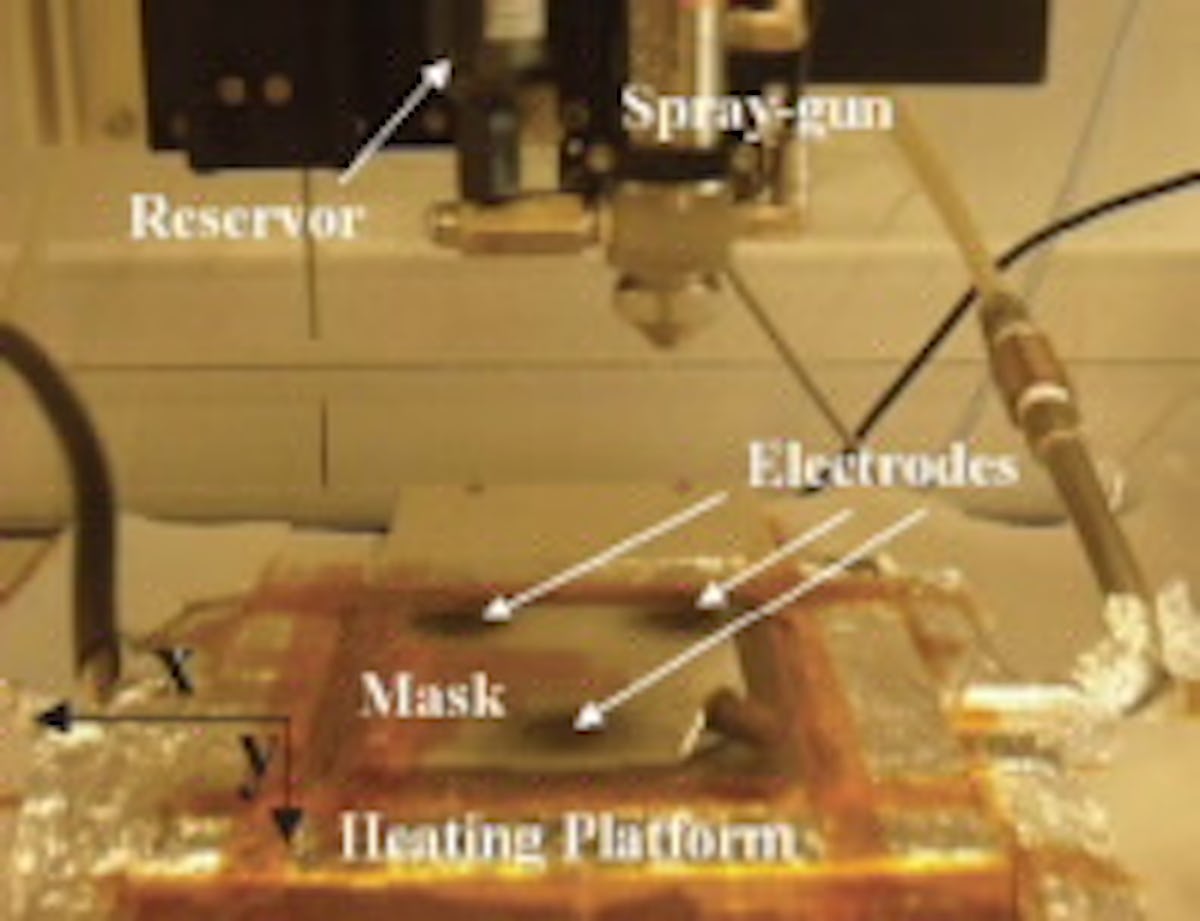 Fig 2: detail of the set-up for air-brush deposition process (1).
The main interest of this technique is the possibility to develop a thin-film technology also compatible with flexible substrates, opening new field of innovation, improving the performances of the device using a low-cost and easily deployable fabrication technique. In this optics, Thales has chosen not to develop complex and exotic nanomaterials based structures, but to adopt a more straight approach in order to achieve real objects with a real added value reducing the final fabrication cost. Presently, Thales is directly involved in the Graphene Flagship project where with a specific partner will develop an industrial machine for the industrial fabrication of supercapacitors electrodes. This will allow moving from laboratory based devices to industrial devices for real applications.
References
1 Supercapacitor electrode based on mixtures of graphite and carbon nanotubes deposited using a new dynamic air-brush deposition technique, P Bondavalli, C.Delfaure, P.Legagneux, D.Pribat JECS 160 (4) A1-A6, 2013
2 Non-faradic carbon nanotubes based supercapacitors : state of the art, P.Bondavalli, D.Pribat, C.Delfaure, P.Legagneux, L.Baraton, L.Gorintin, J-P. Schnell, Eur. Phys. J. Appl. Phys. 60,10401, 2012
PrintForwardTweetLikePinredditShare
Previous
Next