Oct 24, 2013 Raghu Das
There has been varying levels of interest in different types of energy harvesters over the past few years. For powering small or mobile devices, photovoltaics dominate - they are widely produced, robust and relatively low cost. Then come electrodynamic energy harvesters - reliable, high power output and cheap. Both have been available for well over a decade. Then there are the emerging energy harvesting solutions, including piezoelectrics, which saw large interest a few years ago but that has dwindled somewhat as companies grapple with fragility and system design. However, now ahead of piezoelectrics in terms of investment and commercialization is thermoelectrics. They satisfy a need that other energy harvesters do not - where there may be no light or unreliable light levels, and where there may be no movement, RF field or other viable form of ambient energy other than a heat gradient.
Those in thermoelectrics do not necessarily need to start from scratch either. Thermoelectric devices have been widely used as cooling or heating elements for some time, for example to cool electronics in confined areas, to manage the temperature of lasers etc. They have no liquids and can therefore be easier to handle/integrate. Some of the companies supplying these devices are using their product know-how to develop units which work in the opposite way - generate energy from a heat gradient. Other companies are founded directly on energy harvesting using thermoelectrics, developing new methods of how to manufacture them as cheaply as possible.
Powering wireless sensors
One of the target applications of thermoelectric energy harvesters is to power wireless sensors, particular in buildings. Indeed, structural engineering firm ARUP tells IDTechEx, "We very much hope that energy harvesting technology will be further developed in larger scale applications such as communities or cities. In particular, we'd hope to see resources typically considered as waste and traditionally seen as marginal resources getting re-used and through the scale advantage offered by communities and cities, to start becoming economically viable. Some examples might include waste heat or cooling energy, green and food waste, waste water and rainwater." Companies such as ABB has launched thermoelectric powered sensors. Kieback & Peter has launched thermoelectric powered actuator radiator valves, to control the radiator temperature.
Vehicle thermoelectrics
More than $250 million has been invested in developing thermoelectric energy harvesters to recover waste heat in vehicles. This is driven partly by Governments demanding better fuel efficiency. For example, the US Government has announced an agreement with 13 car makers that they need to target better than 54 mpg by 2025, and recovering waste heat is one way to help achieve that. As a result, organizations such as Ford, Daimler, BMW, Volvo-Renault and others are working with suppliers on applying thermoelectric generators to vehicles. Unlike powering the sensors, the companies here need to target hundreds of watts of power generation and last for about 10 years - the lifetime of the car. Volvo-Renault are targeting a cost of around $1/watt. IDTechEx anticipate that these could feature in vehicles from around 2020 onwards. It will take time to develop the system and cost, but once suitable for vehicles the market potential is very significant.
The IDTechEx Research Forecast for Thermoelectric Energy Harvesters
Based on research in the IDTechEx report Thermoelectric Energy Harvesting 2013-2023: Devices, Applications, Opportunities IDTechEx forecast the market opportunity as follows: 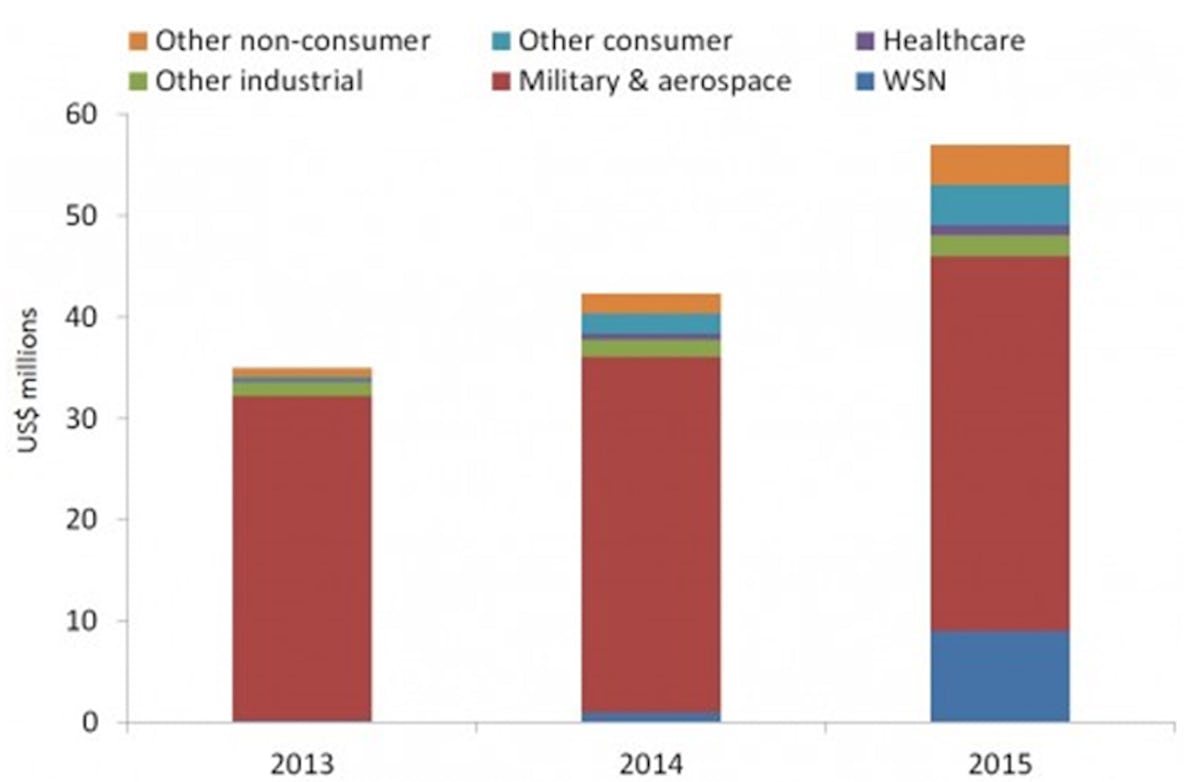 held in Santa Clara on Nov 20-21 will feature some of the global leaders talking about the latest progress on thermoelectric energy harvesters. Critically, it covers end users such as Arup, General Motors, NASA and Robert Bosch discussing their needs and experiences.
Thermoelectric energy harvesting work is covered by organizations such as Marlow Industries, University of Glasgow, GMZ Energy, Laird Technologies, Komatsu Japan and others. The event also covers other technologies and the complete systems - including interfacing and management electronics from speakers such as Intel, ARM, Freescale Semiconductor, Linear Technology and others. For more details see www.energyharvestingusa.com